Home » Art » Pick: Landscapes from the Age of Impressionism and Renoir to Chagall: Paris and the Allure of Color 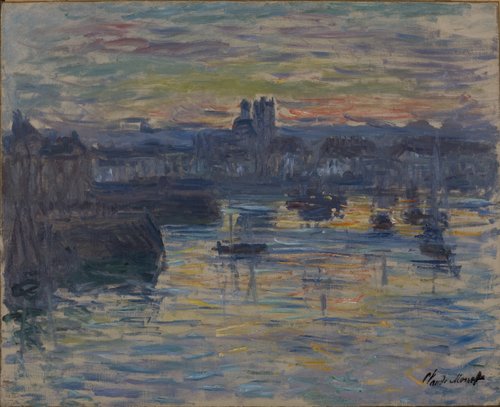 Until September 1 Joslyn will display 38 impressionistic paintings to the public. The paintings range in dates from the 1850’s to the 1920’s, highlighting classic talents like Claude Monet and Gustave Courbet.  See how Monet’s work is so meticulous. It becomes obvious how he would sit in front of subjects for days and weeks altering the lights. The exhibit was organized by the Brooklyn Museum. See the early side of impressionism with  Charles-François Daubigny’s The River Seine at Mantes (1856) and  Gustave Courbet’s Isolated Rock (1862). Both pieces emphasize the importance of sketching. As you walk through the gallery, it may become clear that the impressionists never unified or had one sole purpose. Their techniques could range from loose brushwork from Boudin and jump to Courbet’s wave paintings which portrayed a single wave breaking as one specific crest. The American scenes can be construed as European artists wanting to carry over their vibrant perspective for what this country had to offer them. The impressionists moved art in a new direction, so come see their take on it through September 1. On July 25, they were will be a public tour called “Renoir to Chagall.” The exhibit highlights through Paris the Allure of Color where the city itself became a symbol of art to the rest of the world. The tour is from 6:30 to 7:30 p.m. and meets in the atrium.