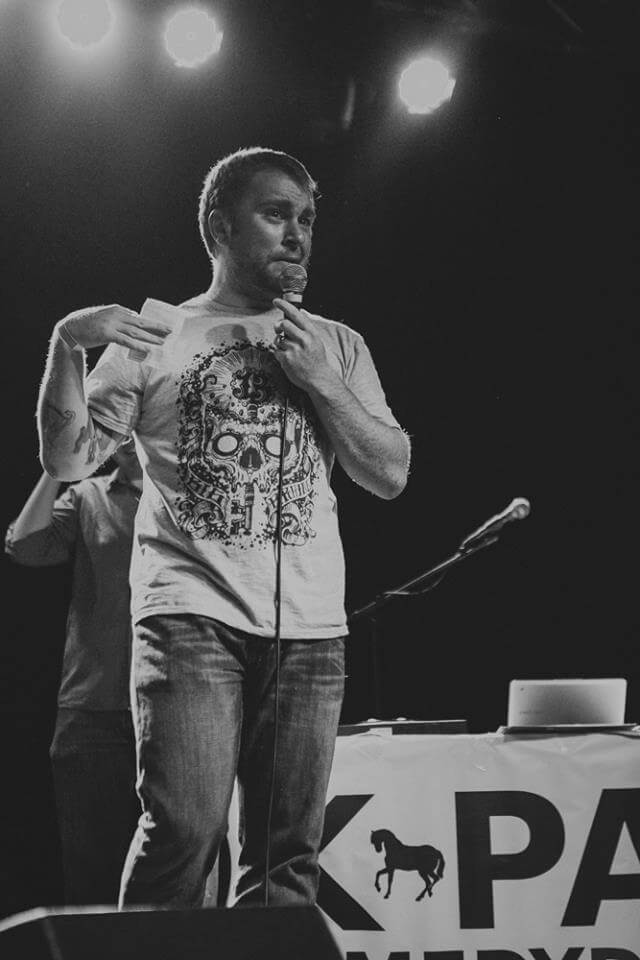 Don’t let the name frighten you away; “The Doom Room” is only scary for the comedians in its lineup. Part of the burgeoning Omaha comedy scene detailed in last week’s Reader (http://www.thereader.com/index.php/site/comments/funny_guys/), comedians Adam Hike and Chris Dryden launch their monthly comedy show at Brothers Lounge this Thursday, August 1 at 8 p.m. Aptly named, “The Doom Room” forces its participants to improvise their sets for audience laughs. “Nothing is rehearsed, and the comics have no idea what topics will be thrown their way,” says Hike.

The “Doom Room” is inspired by the show “The Set List” produced by the Nerdist, an entertainment company that produces podcasts, television shows, and YouTube content. An onstage screen will prompt each comedian with a topic selected by the night’s audience. Eight minutes await each comedian to immediately fill with improvised monologue. Hike and Dryden request the audience place topic ideas in a suggestion box at the front of Brothers Lounge before the show. Audience members are also invited to submit topic ideas to “The Doom Room’s” Facebook page in advance of the show. The pair “try to use just about every topic that is suggested by people who follow the page” but Hike and Dryden are also prepared to create their own topics if the Facebook response is insufficient at first.

Dryden will open Thursday’s show, followed by Bob Gurnett, Hike, Cody Wayne Hurd, Zach Reinert, Abby Rosenquist, Nick Rowley, Destiny Sturdivant, and Ian Douglas Terry. The comedians include two members of OK Party Comedy, one each from Collabo Comedy, 1980Star Comedy, and Triple Eh Comedy, and one of the women of Badland Girls Podcast. Hike and Dryden work to include members of a variety of Omaha comedy in their changing lineups and avoid groups to maintain diversity. Three comics from Chicago will be a part of the September show.

Hike and Dryden find most of the show’s participants among people they have done shows with or who they have seen at other shows and open mic nights. They also welcome recommendations; neither has seen Rowley perform, but “his reputation tells us that he will do great on this show, so we had to add him to the first show.” There is no audition process for interested comedians. Hike announces, “just be a comic who either likes to try new, intimidating things or is just passing through town and needs a show to hop on to.”

Hike and Dryden are a part of a recent explosion in Omaha’s comedy scene; they began doing standup together just this March and are now working to expand and improve comedy’s presence throughout the city. “Ultimately, the goal of it is to challenge comedians,” says Hike. “If you’re not trying to do new things in comedy, you’re not pushing yourself, and if you’re not pushing yourself, you’re never going to get better.” The pair knew each other in high school, but became good friends only a little less than a year ago. “We both come from the hardcore/punk rock music scene, so we bring a lot of the DIY values and ethics into our comedy ventures, whether that be stepping out of the box in ideas or looking to do shows in places that aren’t generally accustomed to comedy shows,” such as Brothers Lounge.

When Ian Douglas Terry suggested they create a show similar to “The Set List,” the duo was immediately interested and traded in their less passionate idea of starting an open mic night. Choosing a name for the show was one of their first challenges. Ultimately “The Doom Room” beat out “The Danger Room,” where the X-Men practice in comic books. “The Doom Room” proves much more interesting and obscure, named after the old apartment of a former Omaha comic now based in Chicago, Zach Peterson. This is the first time the two will set up and host a comedy show. Hike says, “it’s been fairly simple in getting everything set up so far, but the actual show will prove to be the hard part. We are very excited and feel that we are up to the task.”

Lucky for those who cannot attend Thursday’s show, “The Doom Room” will recur the first Thursday of every month and is expected to remain at Brothers. Shows will most often be free, but donations will be accepted for the travel expenses out-of-town comics face. Hike adds, “we are hoping to coordinate with groups on larger comics and maybe do secret sets here and there, and that would most likely be a $5 show. So if you ever see a Doom Room show advertised as costing anything, you can bet that something cool will be attached to it.”