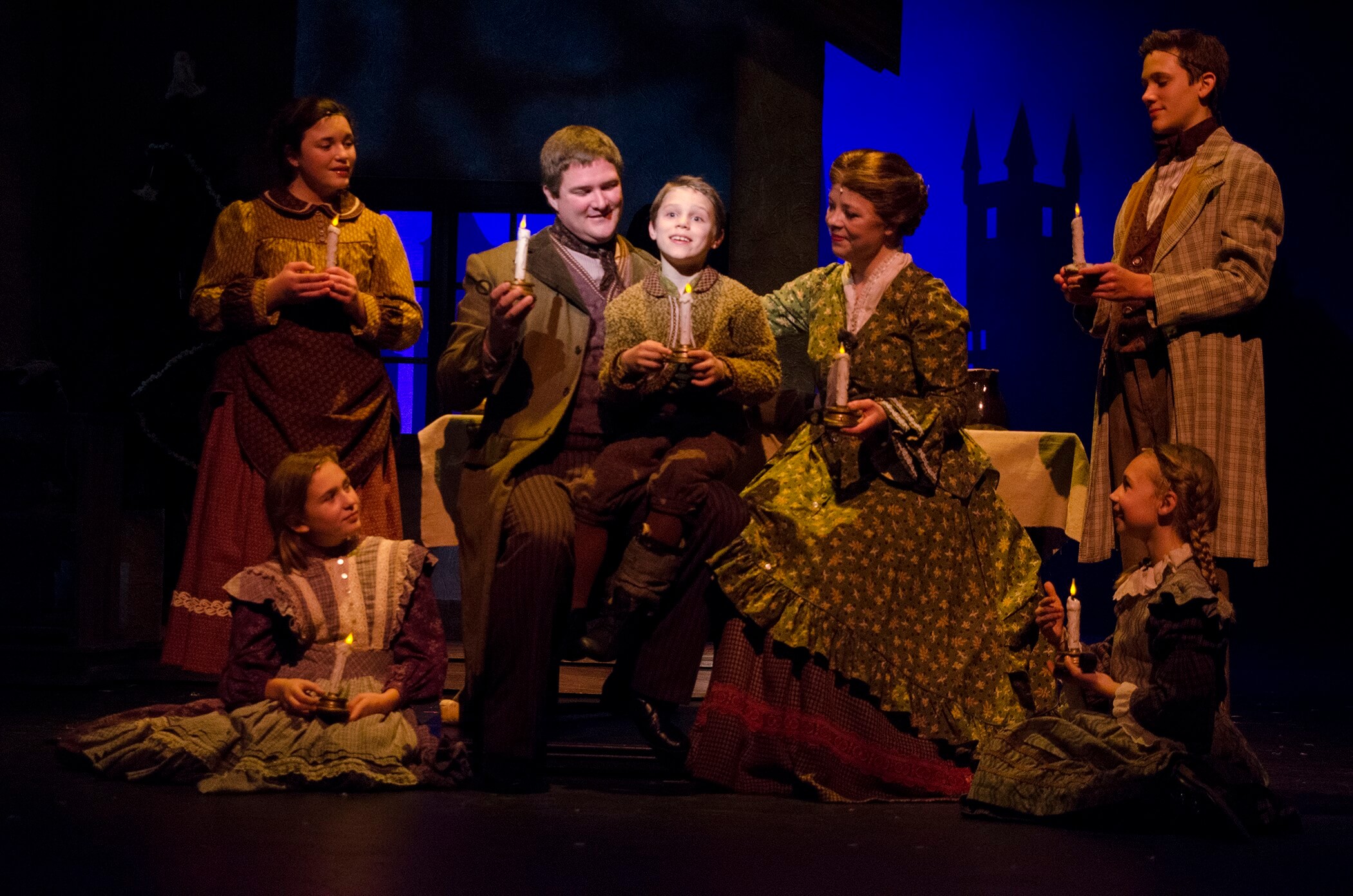 Put it another way: What would Charles Jones think of the latest version of his adaption of the Charles Dickens classic? Or, since the grand gentleman from Georgia is no longer with us, would the purists who prattle over even the subtlest changes approve?

I can only guess at the answers to these two questions, but Charlie Jim, who lived long enough to know the Playhouse would keep reviving his cash cow into the future, would surely think well of it. As for us purists, we’d probably prattle on, making much ado about next to nothing.

More important, Adams kept her promise. For me, the big tests come at the start, when we first hear the musicians strike up those timeless orchestrations by John Bennett, and the finish, when we’ve got to believe in Scrooge’s redemption.

It helps that my wife was pleased by the return of the scrim, which she has longed for in recent years. Once more on Thursday’s preview night, the heavy curtain opened to allow us to see that Dickensian street scene through the sheer, see-through scrim, and it added to the magic that invariably wins applause.

And my test at the end comes when I try mightily not to once more succumb to leaky tear ducts.

I was doing okay, even when the Ghost of Christmas to Come showed us the Cratchit family mourning the loss of Tiny Tim.

But when old Ebenezer simply wished nephew Fred “Merry Christmas” I was a goner even before Fred (Scott Van Den Top) spread his arms and hugged the former skinflint.

So it worked again as it always does to bring Omaha the gift that keeps on giving. The City Council should consider a new revenue stream: a tax on citizens who’ve never attended even a single performance of A Christmas Carol.

Okay, a time for this purist to prattle about changes. Sure, I liked it better when Marley’s ghost rose up from below in a cloud of smoke, but Carl Beck and Susie Baer Collins were still in charge when that change began.

(Some of this stuff gets sentimental: One of our granddaughters, now nearing mid-20s, was only 3 when she was wide-eyed at Al DiMauro’s Marley, rising and rattling his chains, and she whispered, “Ghost coming!” loud enough for DiMauro to hear.)

I sort of enjoyed the raggedy little minions that used to join Marley, but they were relative newcomers, so their absence isn’t a sore point for purists.

The other big news on the ghost front is all good. Mike Farrell is back as the jolly Ghost of Christmas Present, and we don’t need a return of the worry when they used to hoist Dick Boyd’s Scrooge atop his bed. Bridget Robbins replaced Julie Huff as the Ghost of Christmas Past, and she’s wonderful conducting Scrooge’s tour with baton-like motions. From Mary Peckham to Sue Perkins and most recently Julie, Bridget continues to make this role the delight it was under all her predecessors. (Once, briefly, they flew lovely Connie Lee in like Peter Pan, and I’m not enough of a purist to condemn flying ghosts.)

And then there’s that giant Ghost of the Ominous Future. We’ve seen enough versions over the years to build up a tolerance for innovation. There was that humongous black-clad creation that settled for aiming a long broomstick arm into the night, and then came the fiber optic ghost, a triumph of modern technology.

But this latest hulking monster moved solemnly in decomposing rags so we’ll hope to see a Sunday feature on a mad scientist hiding inside as it stalks the stage.

What else? Well, Marley (Don Keelan-White) had a much thicker chain that seemed to attach him tail-like to demons that kept dragging him back to the underworld. The children who invaded Scrooge’s office seemed rowdier than past visitors, even attempting to bind him with ribbons, perhaps to liberate Bob Cratchit (David Krenkel) and rob the safe.

Jerry Longe, in his 10th year as Scrooge, gave me the impression in earlier seasons that he added nice new bits of business each year, but this time his Scrooge was less antic. A nice touch that seemed new was to load his arms more fully with gifts as the joyful Ebenezer brought Christmas cheer to the Cratchit home.

As always, the Bennett orchestrations conducted by music director Jim Boggess and Georgiann Regan’s costumes were the heart and soul of this generous gift. I haven’t quite seen it all 40 years, but I don’t think I can ever get too much of these familiar sights and sounds.