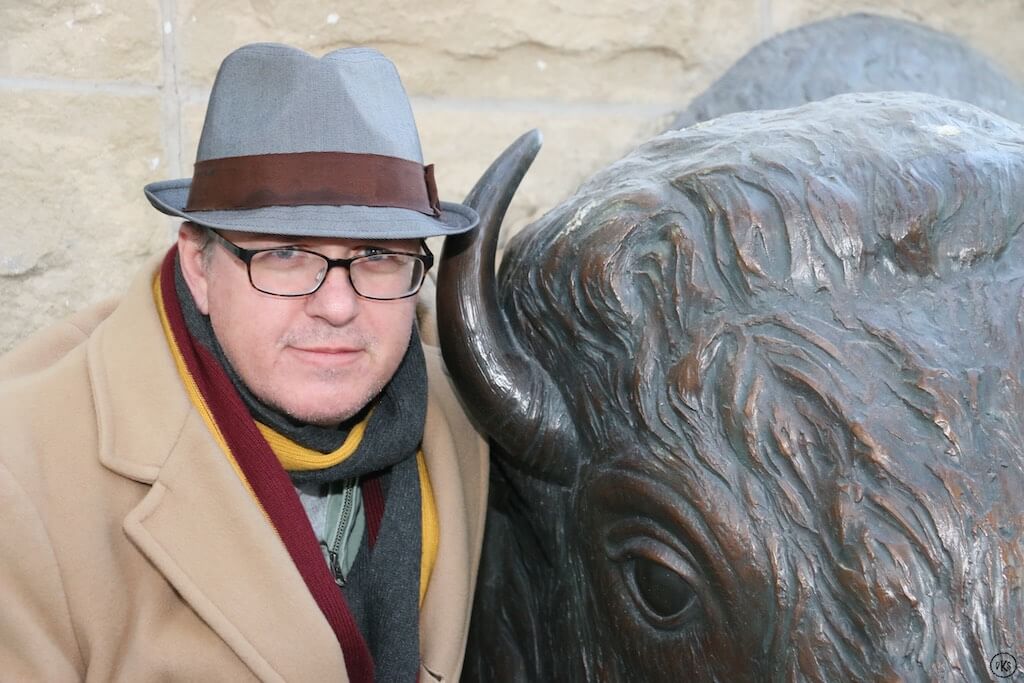 As an adoptee whose identity quest has shaped his life and as a research specialist investigating people’s family trees, Max Sparber perfectly embodies his “history detective” tagline.

His Douglas Country Historical Society fact-finding duties feed his work as journalist-blogger-playwright of wide-ranging interests, from Irish-American culture-history to early Omaha infamy to social justice. Then there’s his thing for singing cowboys, the Old West and everything theatrical. All of which makes him the ideal dramatist for Buffalo Bill.

“I definitely think this has a lot to do with my own search for my identity and how identities are often a sort of collective invention.”

“I think he is in some ways the basis for all contemporary cowboy stories,” says Sparber, who just as Cody cultivated a look with fancy regalia, is seldom without a vintage fedora and tinted glasses

He says the story “is really about how William Cody invented a character called Buffalo Bill as a way of telling tall tales about the West inspired by the actual history of the West.” The play, which uses Cody’s daughter Irma as fan and foil, depicts his conflict over being authentic whole taking dramatic license.

When the Rose commissioned Sparber they didn’t know about his identity search or fixation with Gene Autry and Roy Rogers. They didn’t know he’d done a children’s play, The Ukulele King’s Sunday Family Roundup, featuring his peculiar talents for twirling guns, yodeling and playing the ukulele.

That’s folderol though compared to how the skills of his trade, along with DNA testing, recently aided him, at age 46, in discovering his late birth mother’s identity.

“When I found out who my biological family was, I had exactly the tools needed to churn through that information. It would have been completely overwhelming otherwise.”

The woman who gave him life, Patricia Monaghan, followed pursuits strikingly aligned with his own. She was a journalist and author who often wrote about her large Irish-Catholic family and Celtic mythology. She wrote about and studied theater, just as Max has. He once owned one of her books.

Knowing they were kindred spirits seemed an “astonishing coincidence” he now ascribes to genetic inheritance.

“I do regret not meeting her. I’m just very glad she left behind the wealth of writing and information about herself she did. There’s a lot of people for whom there’s no record of them. Yet she’s unknowable in the sense I’ll never be able to meet her.”

He knows less about his biological father, except he studied art, as Max did.

As best Max can tell he was the unintended result of a fling.

“It turned out the circumstances of my birth were not tragic as I feared. Probably mostly I was just terribly inconvenient and I’d rather be inconvenient than the product of tragedy.”

Now that he’s gleaned things about his mother’s family from her widower and a first cousin, it’s allayed his worst-case-scenario thinking.

“There was a real concern I’d find my biological family and they’d all have tattoos of tears on their cheeks and swastikas on their arms.

Thank goodness it’s nothing like that. They’re very lovely people.”

Most of his Irish clan lives in Alaska and the Pacific Northwest, though some reside in Ireland. His birth mother gained Irish citizenship and even though he’s never been there, he may be entitled to citizenship, too. He intends visiting his ancestral homeland of County Mayo.

He always knew he was not Jewish like his adoptive parents but likely Irish and English. He especially steeped himself in all things Irish, from devouring its literature to learning to play the penny-whistle. His “The Happy Hooligan” blog explores what it means to be Irish-American.

“Being Irish is something I had to invent because I wasn’t raised with that. It was so weird for me for a long time because it felt fabricated and then I realized it’s all fabricated, We all just make up culture. We’re Irish-American because we say we are. We do Irish-American things because we’ve decided that’s what Irish-Americans do.”

He calls a year in Bath, England for a sabbatical his adoptive father made “the defining year of my childhood.”

“It was all very fascinating to me. England is a very old country with a lot of very strange old traditions. One of the things they do is ritualize and reenact history through these pageants. At school I played a Moor battling King George.”

That experience and summers in New York introduced him to the idea of history behind every door or corner.

“I realized the whole world is these little pockets of often undiscovered history. All of a sudden these places around you aren’t just houses people live in but have these entire stories behind them that you can mentally pop into. I really like that.”

Then there’s the Jewish experience he absorbed. “I’m not religious but I do feel I am culturally Jewish, I was raised in that milieu. Jews have a very complex diaspora identity, so they have all these tools for understanding what it means to be Jewish when you’re not in Israel. Irish-Americans have almost none of that.”

As a sign of things to come, the very first play he wrote was inspired by historical events – the Salem witch trials.

Ever since first coming to Omaha from his native Minneapolis, where he wrote about forgotten Minn. history, he’s drawn on Omaha’s past in his writing. His play Minstrel Show examines the infamous 1919 courthouse riot and the lynching of William Brown.

He similarly immersed himself in the history of Hollywood and New Orleans when he lived in those places.

He acknowledges his job with DCHS is “a perfect match.”

“I never expected I would wind-up being a professional historian and it’s so hard for me to think of myself that way but that is at the moment the road I’m on. It’s not a surprise to be here but it wasn’t planned.”

His historical writing is a treasure trove for the organization.

He often makes DCHS presentations related to his findings and he teaches a genealogy class for folks searching their family histories.

Now that he can finally wrap his arms around his patchwork identity, he can look back, as Buffalo Bill did, and see where myth ends and reality begins. His journey’s not unlike Omaha’s own self-image problem.

“There’s a sociological concept called a sense of place – knowing where you come from and what it means to come from there – and this is what I’ve been wrestling with my entire life.”

“When people find out about it it’s exciting and interesting. It gives you something to connect to. It’s a very different narrative from the one Omahans are taught in schools, and it’s a shame because towns that embrace their own wild history often do very well with it.”

Follow his ever expanding family via social media, including http://happy-hooligan.blogspot.com. For play details, visit www.roseheater.org.

EDITOR’S NOTE: Max Sparber once served as arts editor at The Reader and for a brief time was its managing editor. He authors the long-running “Dr. Mysterian” column in the paper.