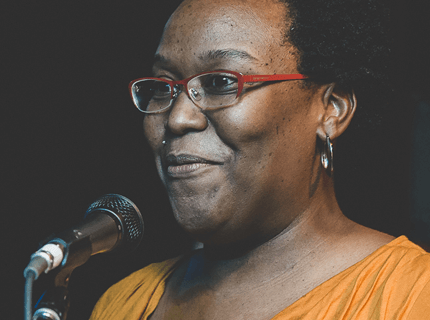 Three-time Omaha Entertainment and Arts Awards poet nominee Zedeka Poindexter envies the performing outlets high school-age poets have today. The March 17-April 20 Louder Than a Bomb is a case in point. There wasn’t anything like it when she was in school.

“I was working in a notebook, I always did, but there was no place to go with these things,” says Poindexter, 39, who’s blowing up with her personal anthems about race, family, relationships, loss and blessings.

But as a teen her thoughts didn’t find a voice outside her private journals. That’s a far cry from today’s young poets, who have platforms galore for their innermost musings. Poindexter should know since she’s coaches LTAB teams from Blackburn, Westside, Millard West and her alma mater, Omaha North.

“These kids are doing things that blow my mind and all I have to do is facilitate a space for them to do what they were already going to do anyway and help them figure out the best way to present it, These kids are fearless, they will tell you any personal story they have, They are incredibly courageous and just all by themselves so cool. It kind of fuels you as an artist, You’re like, If you’re doing this and you’re 16, what the hell’s my excuse.”

Just as LTAB gives youth an expressive arena, Poindexter uses slam and other opportunities to evolve her own work. For example, her Union for Contemporary Art fellowship will culminate in a new collection of poems that revolve around family recipes and food as focal point and bridge for familial divisions. She plans a May 2 reading and tasting.

“It’s a very different thing trying to write a series of poems that interconnect and relate to one another,” says Poindexter, who’s used to crafting slam’s more instinctive, one-off performance pieces.

In 2012 she became Omaha’s only female city slam champion.

“It has almost always been a white man. I might also be the only person of color who’s won, but I know I’m the only woman, so that’s a huge honor for me. I was a cranky woman that year because there was only one other woman and there wasn’t anybody else brown. I was like, ‘C’mon, y’all, can do better than this.’ I was pissed.”

She represented Omaha at the 2013 Women of the World Poetry Slam in Minneapolis, where she was voted an audience favorite.

Her work appears in the WOWPS anthology, Alight.

She’s not inclined to leave her slam roots. She has a long history with the Nebraska Writers Collective, whose head, Matt Mason, is the godfather of Omaha slam. He considers her “a cultural treasure for our community.”

“Zedeka is a nationally-known performance poet. You wouldn’t know by meeting her as she doesn’t name-drop or talk about all she’s accomplished, but her work is among the best in the country,” he says. “It’s been great to see her expand her role by publishing more lately as well as taking on the role of running Omaha’s poetry slam. She really does it all. She’s also a great presence in classrooms.”

In turn, Poindexter’s proud of her Collective family. “We’ve been a force for a good long time. We really had a pretty good run as far as accolades in the slam community. A lot of writers have grown beyond that and published work I really love.”

“Being a slam artist is very different than being somebody who’s devoted their life basically to craft and teaching, which I have not done,” says Poindexter, who’s a thesis away from completing her master’s in communication at UNO. “But it turned out to be amazing. I think there are some people who exist strictly in the performative world and some who exist strictly in academia, but there is a lot of crossover.

“I think the bigger separation or chasm I noticed for awhile was a white scene and a black scene. Myself, i just went wherever the baddest ass readings were. They were different things but vitally important to how I grew as a writer and performer. The perception that anybody is not welcome at either place worries me.”

She appreciates the diversity of the OEAAs and enjoyed doing her thing at last year’s awards show.

“The fact I got to perform poems really important to me before a roomful of artists and everybody got quiet was absolutely one of the most magical things.”

She often writes about the dynamics of her large African-American family. The Great Migration brought her people from the South to Chicago and Omaha. She mines their rich vein of idioms and imbroglios, delighting in food as a bond that nourishes and heals.

“There were struggles, we had our own personal dysfunctions but we were strong and we were happy. It’s been really cathartic to try to tell these stories and be honest about them.”

Born into a family of matriarchs who were “voracious readers,” Poindexter immersed herself in books and writing from an early age.

“Poetry’s been this thing that’s sustained me spiritually but it kind of existed outside regular life.”

She dabbled in theater and journalism but discovered her artistic home in the emergent slam and spoken word movement.

“I always wrote poems but I kind of started finding a community when Matt Mason ran readings at Borders years ago. There were Pop Tarts for prizes.”

She followed the local slam scene to the Om Center, where it’s still based.

Slam slayed her the first time she saw Def Jam. “I didn’t know what that thing was but I was going to figure out how to do that thing.”

She immersed herself in slam in Colorado, where she moved after losing her grandmother and anchor. She returned to Omaha a few years ago to be close to her spoken word soul sister, Felicia Webster, and to her slam girls, Katie F-S and Sarah McKinstry-Brown.

“Slam has saved me in more ways that I can think of. It feels right. If I migrate away from performance and writing I feel the atrophy of it. I like the fact I have a passion, that there’s this thing that drives me. I don’t know what I would do without that as a rudder.”

She wouldn’t know what to do without her creative community.

“I don’t know if I could function without having that sense of support. It’s afforded me most of the close friendships and safety nets I’ve experienced the last 15 years.”

She’s encouraged by the camaraderie LTAB students display. She’s still struck by what happened a few years ago when a Lincoln High team member lost her mother.

“As a team they decided they wanted to come to finals with all new work, including a piece that the girl who’d just lost her mother had written. And so they scrapped everything. There was no strategy, they were not worried about winning, they were like, This is the work we want to feature. They believed in it and they won, and it was so good. The thing that was so cool was they were willing to sacrifice to do this thing intrinsically personal to them. I’ll take that any time over people who live for the scores and stuff.”

She calls LTAB coaching “the best job ever.”

She feels confident about one day supporting herself as an artist and teacher. She may next pursue a master of fine arts degree,

“I don’t know many artists who value themselves for the work they do because it’s always something that’s never fully supported them,” says Poindexter, who works a corporate day job. “Being valued for my artistry is something I’ve learned to do a lot better.”

View her performing at buttonpoetry.com.

For Louder Than a Bomb details, visit ltabomaha.org.