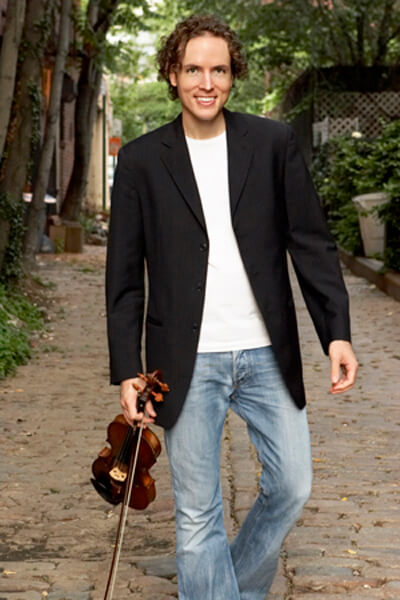 An April program at KANEKO offered a preview of the mixed media work, Portals. Virtuoso violinist Tim Fain and filmmaker Kate Hackett provided tantalizing glimpses of a phantasmagoric experiment in performance and social media. KANEKO director Hal France and the Portals creative team also laid the groundwork for a residency in the collaborative arts.

There’s great anticipation for the finished piece making its Midwest premiere here. The two shows follow on the heels of the work’s September 25th world premiere in New York, where Portals was well-received. It’s hard not being curious about a work that integrates multiple mediums and styles into a seamless experience. There’s music by acclaimed composers Philip Glass, Aaron Jay Kernis, Nico Muhly, Kevin Puts, Lev Zhurbin and William Bolcom. Images are by Hackett and Benjamin Milliepied, whose choreography is also featured. There are the words of Leonard Cohen. And the musicianship of Fain and pianist Nicholas Britell.

So, what is Portals exactly?

Think of it as a performance piece bridging the divide between real and virtual, live and digital, all expressed through a merging of set design, lighting, music, video, dance, literature, spoken word and the Web. It’s about finding new portals of communication and connection between old and new forms. New York Times reviewer Allan Kozinn felt Fain “succeeded admirably” in finding “new ways to frame the music.”

Where does the social media aspect come in?

During the concert Fain will perform live on stage, as will his accompanist, but he will also interact with several performers, even a virtual version of himself, seen via rear-projected videos that give the impression of social networking exchanges. It’s meant to be an immersive, sensory, boundaries-breaking, genre-bending experience.

KANEKO, along with Silicon Prairie News and local universities, is hosting a Live Social Media event that seeks “experimenters” to participate in the Portals experience and offer feedback. To sign-up, visit www.siliconprairienews.com.

What about the team residency?