The Brooklyn-based, Jamaican-born artist, whose one-person show in Joslyn Art Museum’s Riley CAP Gallery is now on view through January 19, 2020, makes works that may be described as large-scale photographs manipulated by picking into their surfaces to create upraised surface patterns. Yet, it’s a characterization so simplistic as to undercut Smith’s complex visual and metaphorical content.

In fact, the surfaces of his photographs are so attractive, over laced with varying geometric traceries of white, as to be the initial critical focus for the viewer. Smith has developed a technique in which he takes a sharp wooden tool originally designed for use with clay and pierces the photograph with it. Each little chad of paper, sticking up from the flat surface, thus carries both the remnants of the original image and its white underbelly.

The result is one of shifting optics. As you walk by the work, the angle of the lifted paper changes the way the image appears, reminiscent of lenticular prints or holographic imagery. At other times, you feel as if you are looking at something through frosted glass. This is no small amount of visual disruption or distortion — each photograph is dominated by an openwork stippled pattern.

Smith has settled on calling these works “picotages,” after an old method for printing on fabric using blocks of wood into which brass pins are arranged to form a design; the pins are inked and pressed onto fabric, creating dotted patterns. The patterns emerging from Smith’s photographs are geometric: stripes, rectangles, triangles and ellipses.

Among the cultural touchstones in Smith’s technique are African tribal scarification practices, in which the skin is pierced or etched to create raised designs. Smith has also acknowledged his interest in several Western forms of creating unusual optical interest in art, including traditions of late-19th-century Pointillism and the mid-20th-century geometric and optical art movements.

Equally fascinating and contextually germane is an apparent interest in dazzle camouflage. Dazzle camo (also called razzle dazzle) was a technique developed in WWI of painting British and American military vessels in bold, striped patterns so as to create optical distortions that would confuse or confound the enemy’s ability to gauge the size, speed and direction of ships at sea. From today’s perch, such ships looked like giant floating Cubist compositions. Or a Jun Kaneko production.

For Smith, the ideas of camouflage and disruption are key, and here’s where the viewer can get below the surface of his penchant for optical trickery: His works also function as analogs to the fractured veil of memory as well as dualities not limited to assimilation/cultural heritage, community integration/segregation, insider/outsider, and the like.

Judging by the proliferation of palm trees alone, there is a distinct tropical vibe to Smith’s photographs, and it is not wrong to associate this with the artist’s particular point of view. Born in St. Ann’s Bay, Jamaica, Smith came with his family to Miami at the age of 9. His education later took him to the Kansas City Art Institute and then on to Brooklyn as a professional.

Take, for example, “Untitled, Junction,” the first work on display as you enter the exhibition. It is an image of a sandy coastal view behind a kind of double scrim of a colorful beaded curtain in the foreground and the raised surface design of stripes and triangles. Smith yields no specific clues about the location, leaving it up to the viewer to decide if this is Jamaica, Miami or somewhere generic. The scene, with its dazzling camouflage, nonetheless conjures the idea of tropical heat and the pleasures of the sun and sand viewed through a prism of distance and memory.

Several other works exist at a subtle cultural crossroads. “Furtively Advancing Down Jones Lane” is a colorful, candid shot of a nondescript, two-story building in Jamaica containing a pub. Outside, a few men gather on the stairwell; in the foreground is the blurred image of a man’s face, his distinctive striped Rastafarian cap visible like a fleeting rainbow reflection in the lower left. 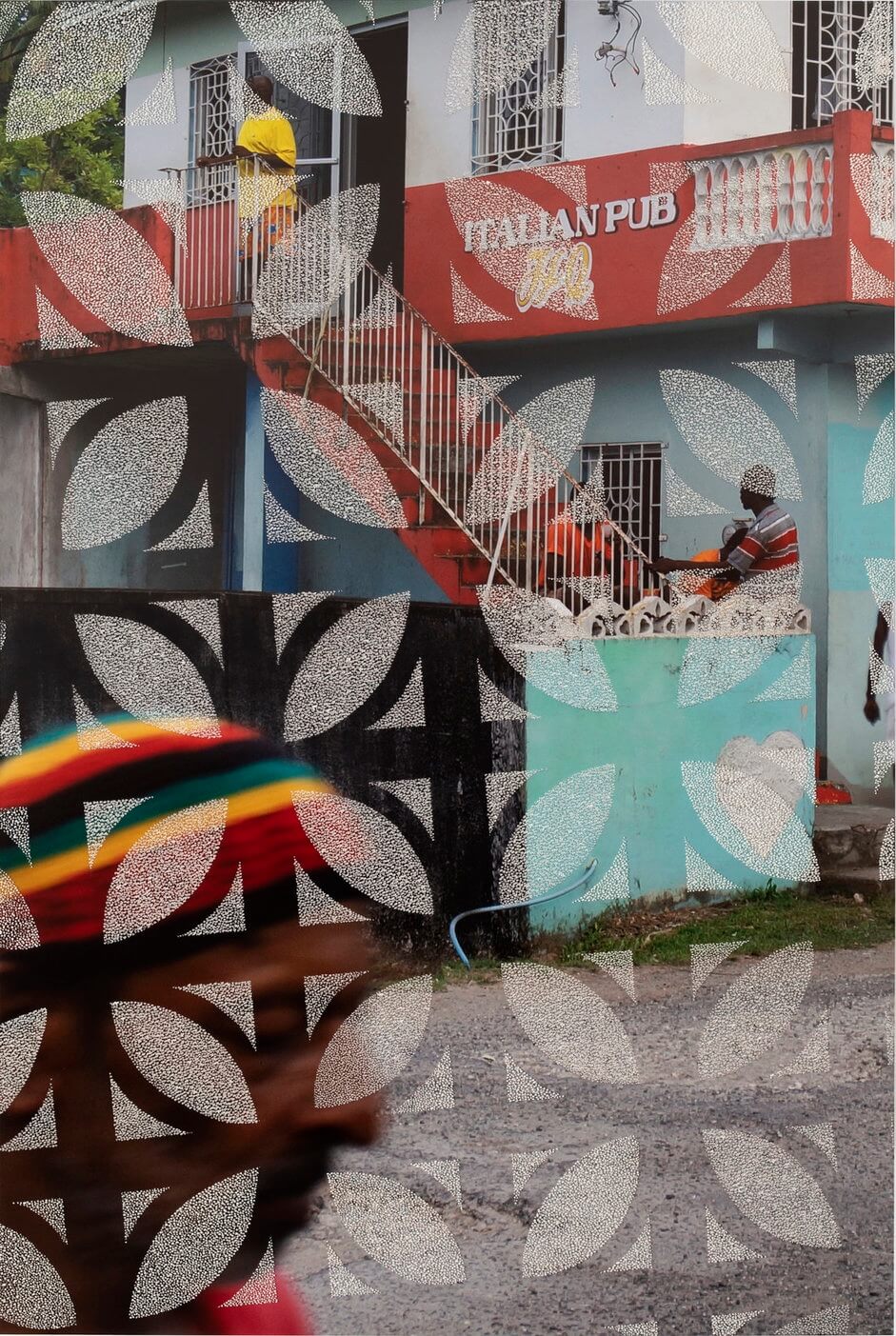 Smith enhances the feeling of “furtiveness” described in the work’s title by making the viewer peer at this image through a fence made by the stippled pattern of repeated breeze blocks. A frequent device in Smith’s “picotage,” they function effectively as decorative flourishes and are also instantly recognizable as a typical warm climate cinder-block construction that simultaneously provides privacy and air flow. We are left on the outside looking in, Smith’s metaphor for his own experience being a cultural pedestrian, both a part of and apart from such familiar surroundings.

Relating strongly to the immigrant experience are Smith’s images taken at The Gather, Brooklyn’s West Indian Labor Day parade. At this Carnivalesque annual event, participants masquerade to help preserve and celebrate community, especially those cultural practices and traditions often lost in the process of assimilation.

“Untitled, 7 Women,” with its close-up massing of female participants and splashes of colored feathers, describes the joy and intimacy of the event. “Untitled,” with its focus on the splendid red and green costuming of a performer, also seems to key on the pleasures of the day. Even Smith’s foliate screening devices do not seem to prevent connection but rather echo the vibrant scene.

Not so with “So What,” in which the image of an elaborately costumed performer with a fantastic green and pink feathered headdress is obscured by the dazzle camo of a cinder block wall. Identity and connection are disrupted, underlining the tension in Smith’s work between within and without, participation and observation, belonging and exclusion, closeness and distance.

Perhaps the most abstract work in the show is the one that keys most intently on a sense of surveillance. “It’s a Frequency,” is a monochromatic crowd scene of an undetermined source. The faces within are all watching the something just out of our view. Smith’s breeze block screen is deployed at an angle, enhancing an already cinematic, noirish feel. The work is formally intense, both attractive and disarming. Smith’s ultimate act of razzle dazzle here is one of almost complete dislocation, effectively canceling the power of the gaze and underscoring his stance on the truth of photography and life: What may seem black or white are really just shades of gray.

Paul Anthony Smith is featured in the Riley CAP Gallery through January 19, 2020, at Joslyn Art Museum. There is no admission fee for this show. The museum is located at 2200 Dodge Street and is open Tuesdays through Sundays from 10 a.m. to 4 p.m., with a late close on Thursdays at 8 p.m. For more information, visit www.joslyn.org or call 402-342-3300.