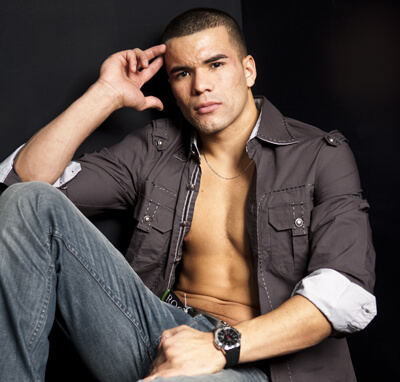 Republic of Couture is more than a stone’s throw away from the “Jersey Shore.” In spite of those who would pigeonhole Midtown Crossing’s brand new boutique as an Ed Hardy-filled, urban club-goer’s fantasy, ROC is stocked with an unexpected variety of upscale brands and goods. Along with clothing, shoes and accessories for men, women and children, ROC carries a full selection of items such as candles, fragrances, books, watches, jewelry and more. From simple beginnings in a Michigan shopping mall, Founder Gastón Garcia watched his company grow from a single kiosk into a national retail chain. With a mission to create “a shopping experience unlike any other,” the store sets out to serve a diverse crowd with anything from T-shirts to customized goods. “ROC is not only a price-conscious fashion destination for today’s young and trendy crowd, but also an excellent source of personalized service for a more mature, sophisticated customer,” Garcia says. By stocking only three to eight pieces of any given piece of clothing, Garcia sets out to offer shoppers “a sense of individuality in a world where cookie-cutter fashion is hard to avoid.” With more than 10,000 square feet of space on their side, ROC appears less like a boutique and more like a miniature department store. Upon entering the Omaha location, the customer walks into the designer area, which carries brands featured in stores such as Neiman Marcus or Saks Fifth Avenue. Singer Gwen Stefani’s critically praised line, L.A.M.B., Free People and Arnold Zimberg, a designer for a popular denim line called 7 for All Mankind, are all featured in the designer area. When asked about upcoming designer additions to the store, Dina Brichok, VP of Buying and Visuals for the chain, rattled off a list of brands that would make many fashion forward Omahan’s weak in the knees. “We have Diesel coming in shortly,” Brichok says, “as well as Christian Dior, House of Harlow 1960 [Nicole Richie’s vintage inspired jewelry line], Carrera, Ray-Ban and both Hudson and Joe’s Jeans.” Brichok also mentioned that they would be getting in a full line of Puma, Steve Madden and Creative Recreation shoes, giving Omaha’s current footwear Mecca, Von Maur, some much needed competition. Wandering deep into the store, the customer comes across a more moderately priced selection of clothing, heavy on the denim. Customers can’t go wrong with jeans starting at $58 and can find anything from raw to heavily distressed and embellished designs. ROC also carries the ever so popular denim leggings for women starting at $42. Denim lines include AG, True Religion, Rock Revival, Cult of Individuality and NEO. Surrounding the cash wrap, customers can shop a wide selection of men’s jewelry and accessories. Indeed, ROC does carry at least one line popular with the Jersey Shore crowd, Rebel Spirit, but they’re the first to proudly point this out. At the boutique’s bend, customers (or their children) can take a break and play “Halo” in the lounge area while listening to a wide variety of tunes coming from the nearby DJ booth. This area of the store features a hodgepodge of accessories, home items, books, jewelry, fragrances and undergarments as well as a small selection of children’s clothing. Notable pieces include Storm and D&G Dolce and Gabbana watches, Spanx (need I say more, ladies?) and Soy Naturals candles that double as lotion after burning. The backside of the store faces the grassy, center court of Midtown Crossing and features a wide selection of T-shirts and athletic wear. Casual wear lines include celebrity favorites such as True Love False Idols and Local Celebrity. In addition, ROC carries the line of former Creighton University basketball player Kyle Korver, who currently plays for the NBA’s Chicago Bulls. Finally, one of the humorous yet useful elements at the rear of the store is located in the spacious dressing room and is the playfully named “the booty cam.” Shoppers need not strain their necks checking out their backside in a new pair of jeans when they can simply stand in front of a camera while facing a flat screen with a zoomed-in view. Overall, ROC appears genuine in their desire to provide their customers with a unique and enjoyable shopping experience. Fans of the boutique and skeptics alike should make it a point to attend ROC’s Grand Opening celebration on the evening of Friday, Feb. 25. With the help of Omaha Nightlife, attendees can shop, eat and watch a fashion show featuring the models of Omaha’s own 89 Talent Management. Republic of Couture is located at Omaha’s Midtown Crossing, 220 South 31st Avenue, Suite 3103. For more information call 933.7555 or go to rocintheweb.com.