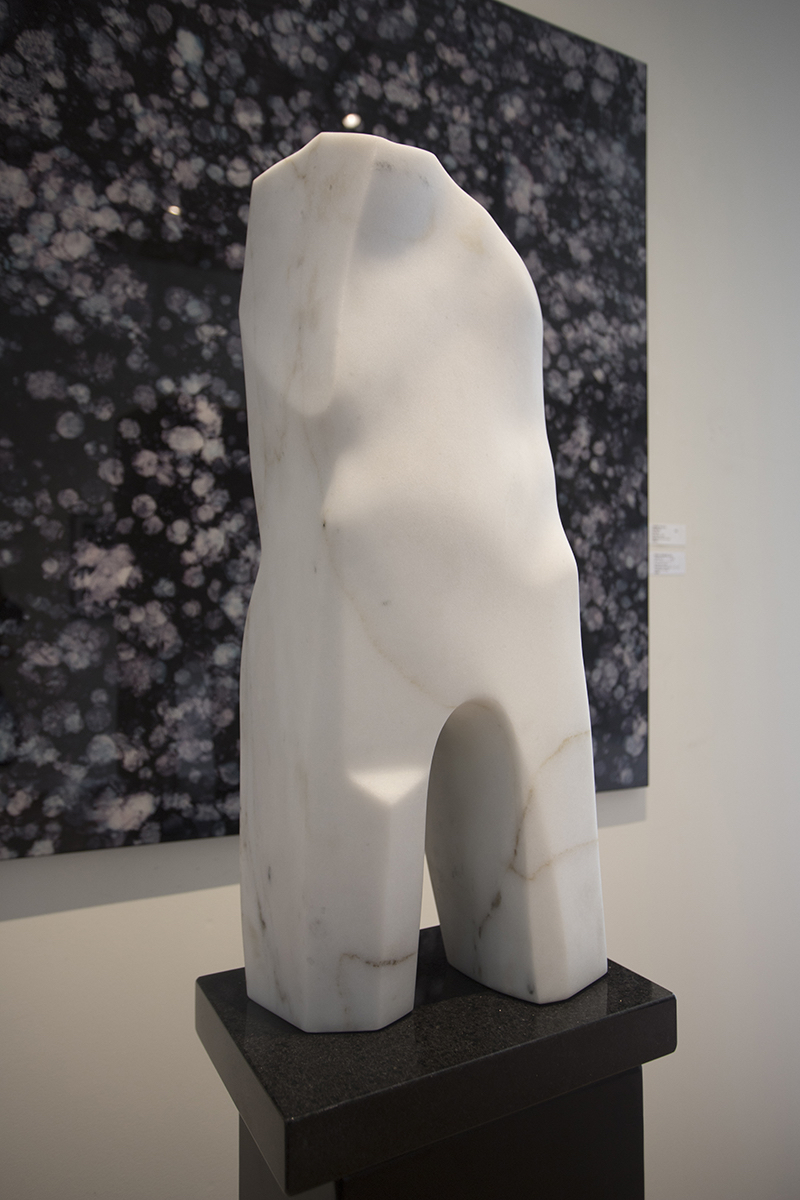 For millennia, artists have been working to find the figure hidden in the block of stone: from the Paleolithic Venus of Willendorf to the classical Venus de Milo; from Bernini’s sensual “Ecstasy of St. Teresa” to Rodin’s soulful “The Kiss.” And then there’s Michelangelo, who encapsulated the quest stating, “I saw the angel in the sculpture and I carved until I set him free.”

A related, yet divergent path was taken by those sculptors who eventually became engaged with the spirit of abstraction, including Sora Kimberlain whose exhibition of new and recent stone sculpture is on view at Modern Arts Midtown through September 28.

Overall,Stone: Sculpture by Sora Kimberlainis an impressive group of 3D work further enhanced by a curatorial decision to place the majority of pieces “within” a complementary context of 2D work by such artists as MAM owner Larry Roots, Graceann Warn, Roberto Kusterle and David Lovekin.

Perhaps legendary modernist Constantin Brancusi said it best, or at least said it first a century ago: it was his goal to represent “not the exterior form but the idea, the essence of things.” His process was the same—carving by hand directly into stone—but his production was not imitative nor terribly representational; he created natural forms from stone that were simplified, streamlined, elegant and still highly evocative.

As inheritor of this artistic impulse, Kimberlain has pursued an approach to sculpting that is abstract, yet calls to mind the postures and structures of human and natural forms. She works in a scale that is not monumental, but intimate, in dialogue with her materials, selecting a range of beautiful cuts of marble, granite and alabaster not only for their inherent patterns of veining and occlusions, but also for their capacity to be transformed into a personal form of expression.

“Colorado 7” displays the traditions of marble carving invested with a more contemporary abstraction. Kimberlain has chosen a very milky marble with minimal veining and lively visual depth which when carved and polished reflects the classical ideal of representing human skin. 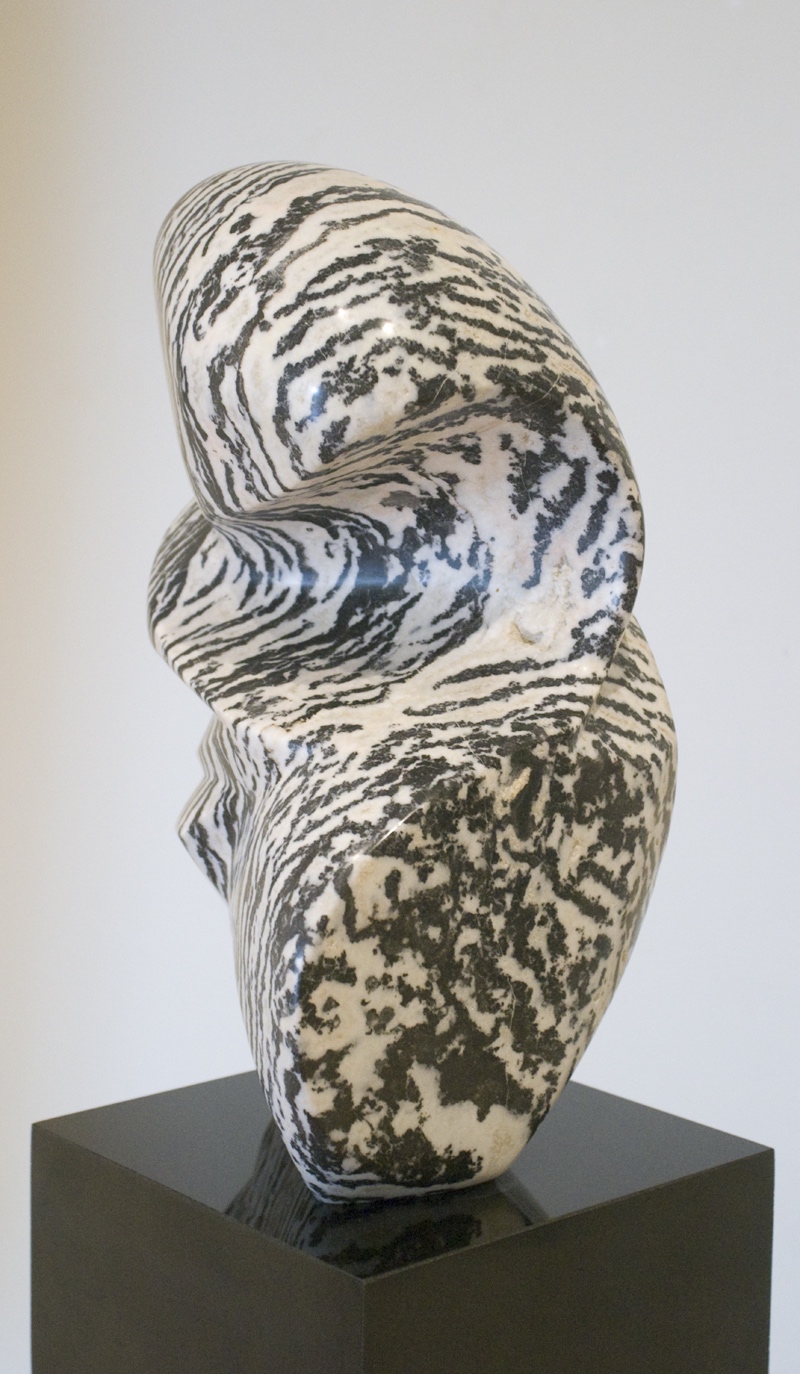 Its shape—essentially a rectangular block atop an arched form—reads like a torso with legs. No six-packed abs rendered here—this Adonis must be a bit of a couch potato, as the surface ripples with smoothed lumps that smilingly counter the perfectionist vibe.

“Unfolding,” a sculpture in Utah zebra marble, is an apt introduction to another aspect of Kimberlain’s aesthetic. She takes advantage of the distinctive, bold striping of the stone, creating polished, rounded and folded forms and deeply curved hollows reminiscent of an upper torso, with shoulders and a bowed head with a sweeping coiffure.

There are other examples of stone with showy patterning in the exhibition. In several sculptures, Kimberlain uses Norwegian rose marble, a pink stone with wide veins of white and green-grays. “Norwegian Marble No.5” is a tall slab that undulates as it tapers vertically. 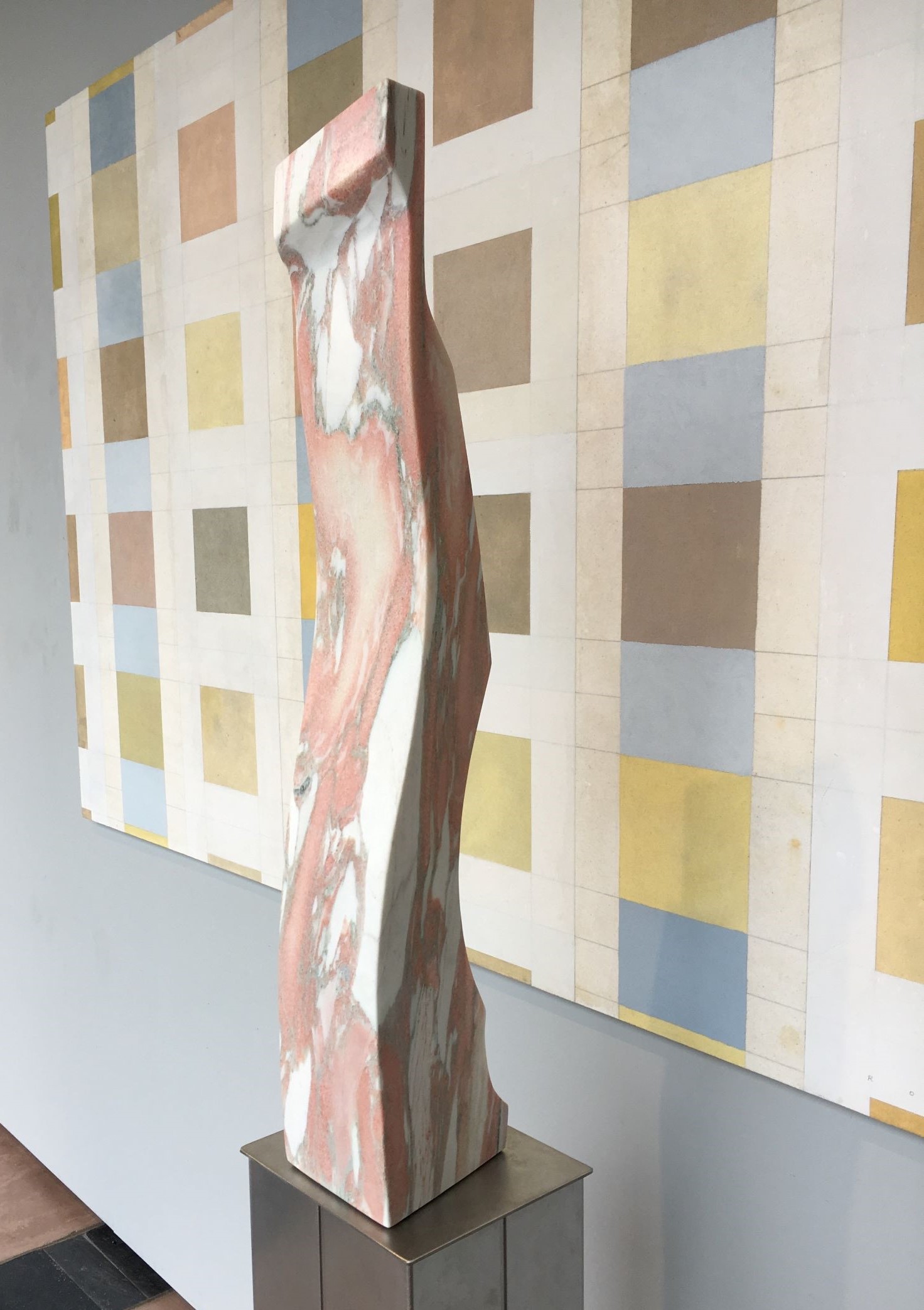 It combines both curved, biomorphic and lean, twisting linear forms. With its vertical orientation, it reads easily as an abstracted standing human figure. Kimberlain prefers a honed finished for this particular marble—smoothed and matte, not polished and shiny, enhancing the subcutaneous feel of the graining.

Equally dramatic are sculptures such as “Fire” made from Utah honeycomb calcite. It has a brilliant amber color, is patterned by fibrous white membranes and has a translucency that makes it glow like embers when strategically lit.

Kimberlain generally prefers to let the calcite do its own thing rather than trying to submit it to her will for a more figurative outcome, and the results tend to emphasize the underlying beauty and organic quality revealed by the block—nature’s abstract painting at work. 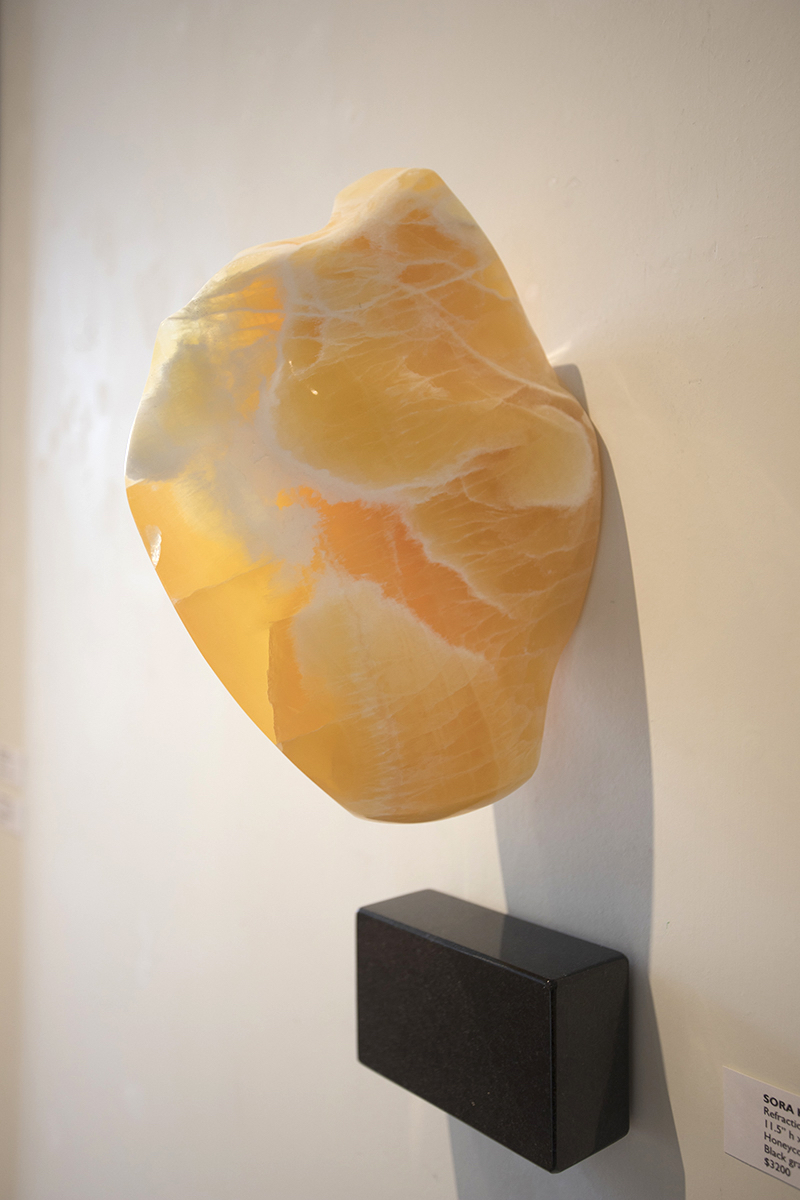 “Refraction” is a small piece of honeycomb calcite, but its orientation displays a new approach for Kimberlain. It is a fin-like wedge of stone and rather than being displayed on a pedestal, is hung directly on the wall. What would have been its base of black granite now floats just below it as a separate compositional entity. Converting the sculpture to a wall relief has the effect of emphasizing her pursuit of a more purely abstract expression.

The exhibition features a number of works in black marble which, with its rich ebony color shot through variously with veins of gold, white or green reads immediately as suave and sophisticated, and Kimberlain obliges in her response.

Carved from nero marquina marble, “Galaxy” is a prime example of her new streamlined work, as well as an approach to pairing forms that she is currently exploring. Here are a duo of slender pillars, each with twisting facets and a slight bend in the center. 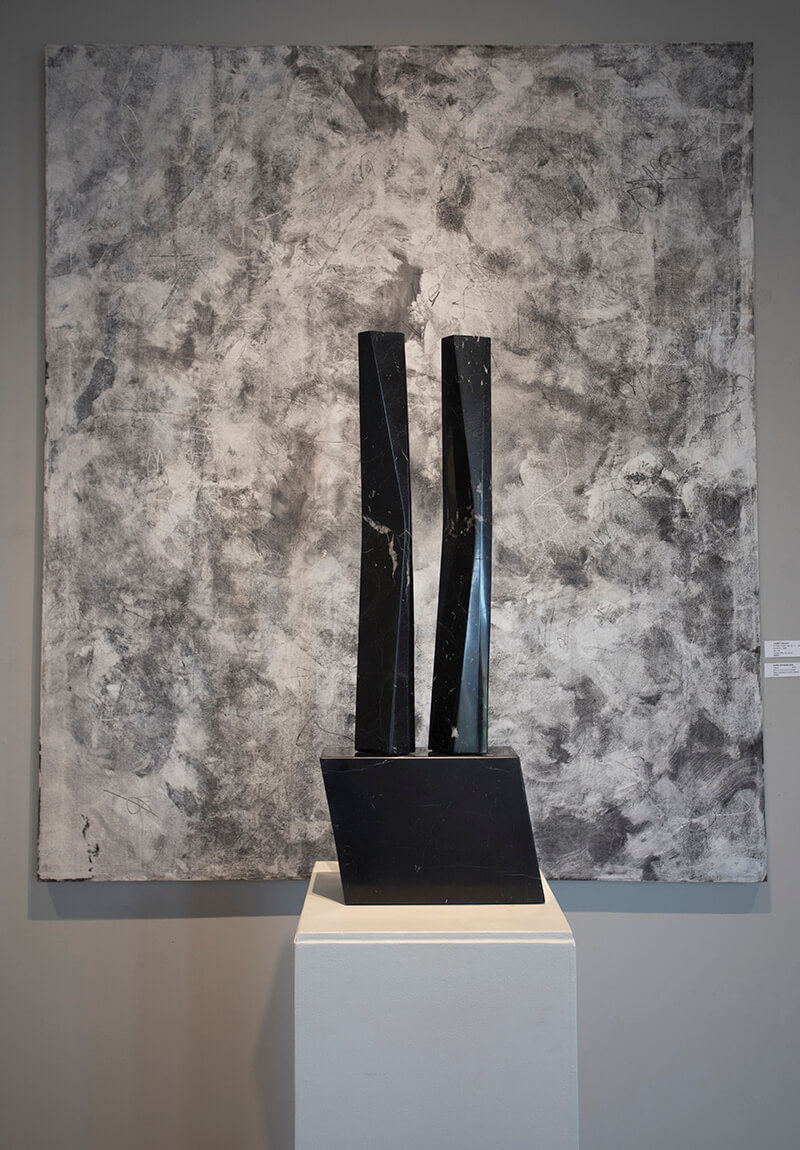 Kimberlain creates further play in their relationship by placing each on a post that allows them to swivel independently. This allows for a dynamic and changing experience, at the will of both artist and (hopefully) owner. Seen within the perspective of Kimberlain’s oeuvre, one can read this pair as a lean human couple; seen as something perhaps more architectural, they nearly evoke a memorial to the Twin Towers of 9/11.

Given Kimberlain’s proclivity for referring to the human figure, there are two sculptures here that represent surprising tangents away from this anthropomorphism. “Changing Places” is entirely architectural, with its gabled corner hewn from Indonesian limestone.

Whether smoothed or roughened, the material emphasizes a kind of humble nature—it is matte and uninflected, and when made into a house-like shape, reminds one of concrete. The poetry of the piece lies in Kimberlain’s articulation of the corner—thick on one leg of the angle and sheer on the other—to suggest a form and its shadow, echoed by extension through the sculpture’s black granite base.

“Da Vinci’s Teeter-Totter” is a kinetic sculpture, an exercise in visual and physical balance. A thin bar of black granite is perched horizontally atop smaller block of mahogany that is bisected perpendicularly by a bar of stainless steel. A light touch on either end of the granite causes the bar to rise and fall effortlessly.

A lovely and elegant piece, especially with the care given to positioning the stainless pivot in a burl of the wood, it nonetheless feels at a too much of a remove from the ways in which Kimberlain is successfully melding organic and linear spirit in the show.

Turning from the objects to the exhibition itself, it must be noted that this show is a visual delight, due in measure to the extra effort put into its display by MAM owner Larry Roots. Rather than creating a forest of sculpture pedestals filling the mass of each gallery space, Roots has very sensitively centered each sculpture in front of a painting, drawing or photograph that reinforces the tone or aesthetic of the sculpture. The flat works act, uncharacteristically, as backdrops for the sculpture.

Normally, this is a risky curatorial gambit. It removes one facet of the sculptures’ dimensionality, since you can’t walk around the back of any of them. And it could smack of a decorator’s or salesman’s prerogative.

But the fact is that the selections—paintings by Roots and Warn, photographs by Kusterle and ink drawings by Lovekin—are so spot on as to rise above the artifice and help you to understand Kimberlain’s sculptures as art and not as glorified rock specimens.