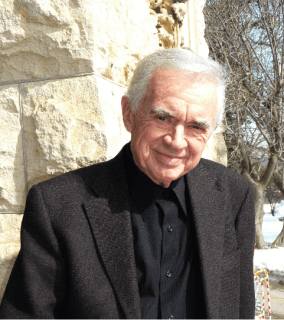 Public television was a dream when Ron Hull joined what became the Nebraska Educational Television network in Lincoln. It was 1955 and the broadcast school graduate arrived inflamed with the possibilities of the fledgling medium.

Fifty-seven years later he’s still enthralled even though he misses live television and finds himself at 82 having outlived his contemporaries from those pioneering days. It’s been quite a ride for Hull as a NET host, producer, director and executive.

History exerts a strong pull on Hull. He maintains ties to the Sandoz and Neihardt legacies through his work with the Sandoz Society and the Neihardt Center. He emcees the annual Neihardt Days. He’s served on the board of the Willa Cather Pioneer Memorial in Red Cloud and headed the state’s  Lewis & Clark Bicentennial Commemoration committee.

His own background reads like a dime novel. At 15 in Rapid City, S.D. he discovered he was adopted and that his birth mother had been a prostitute in a brothel run by one of the West’s legendary madams, Dora DuFran, who’d befriended Calamity Jane in infamous Deadwood. Among her other talents, DuFran was a midwife. When one of the girls in her Rapid City house got pregnant DuFran delivered Hull into the world. Soon after his birth she put him up for adoption. A respectable family raised him.

Buoyed by his search for identity and belief in a shared yearning to find meaning in our lives he’s made history a priority at NET, particularly Nebraska stories. He nurtured the film production unit, whose Oregon Trail, Willa Cather, Standing Bear and Monkey Trial documentaries have aired nationally.

Hull also founded the Nebraska Video Heritage Library that’s preserved NETs archives. He loves that programs are accessible to anybody online. “Young people need to know who they are and why they have this rich culture to enjoy,” he says.

As one of the network’s leading ambassadors, he co-chaired the NET Foundation’s Inspire Nebraska endowment campaign that raised $25 million. A special fund for telling Nebraska stories is endowed in his name.

Hull also served stints with the Corporation for Public Broadcasting in Washington D.C. and the U.S. Foreign Service in Vietnam. At CPB he held large pursestrings and expedited memorable programs. As a Foreign Service officer he shepherded a project that set-up public TV stations in Vietnam in our government’s vain attempt to win people’s hearts and minds.

Stories from this singularly rich career comprise his new book, Backstage (University of Nebraska Press). The long-in-making memoir is his gift to the field he loves, to the network he helped build and to the people he’s met along the way.

“So many interesting people I’ve worked with are no longer here and I wanted to extend their lives by giving other people an appreciation for what they did for us. Teachers. Performers. Poets. Writers like Sandoz and Neihardt – people I was fortunate enough to know over a long period of time. They all contributed so much to our cultural heritage by telling us who we are.”

He writes that working in public TV is “the best way to get a liberal arts education every day.” In an interview he elaborated, “You’re constantly sitting at the feet of scholars. It’s a great pleasure and one of the best parts of the job. I’ve been really fortunate to connect with a whole lot of fascinating people.”

A measure of Hull’s enthusiasm and vision is that he persuaded two brilliant writers of the Great Plains, Sandoz and Neihardt, to do TV at all. He actually produced-directed a seven-hour series with Sandoz talking creative writing.

“I think my (main) contribution was getting her to illustrate her philosophy about writing with anecdotes, with personal things in her life. which to me tells a story and brings it authentically to life.”

He recalls. “She would look you or the camera straight-on and say, ‘You have a great story to tell and I’m going to tell you what it really takes to tell it.'” In the course of shaping his memoir Hull says he came to appreciate what she preached. “She used to say writing isn’t writing so much as rewriting, refining, polishing, reading it, throwing it away, starting over and writing it again. If you’re going to write anything worth other people’s time, you’ve got to be totally honest, you cant soften it, you owe that to yourself and to good writing. You must tell the truth.” He tried to follow that advice with his own book.

He says while “she was absolutely driven she had this wonderful interest in other people. I always loved that about her. When she was in the studio and students came she always had time for those students. Or anyone. And she always listened to people because she learned so much from them.” He recalls she compulsively made notes of her observations about people and places, storing the scraps in shopping bags inside her apartment, and drawing on them when she needed real life details for her writing.

Hull developed a strong rapport with Neihardt as well.

“We connected instantly,” says Hull, who produced three half-hour programs with him in 1962. “It truly was a new beginning for him and his books.”

A particularly memorable program saw Neihardt read from his account of the death of Crazy Horse in Black Elk Speaks.

“He recited that section of the book for 24 minutes from memory in one take. There were no mistakes. He was 80 years old when he did that. His memory was just phenomenal. He was a mystic and I know part of his appeal for me was he was always looking for the allegorical. He believed in the spirit world and that fascinated me. And he was just so accessible. Everybody loved him. Every time he opened his mouth he said something that we all wrote down. He was just one of those people.”

Another mystic became a household name indirectly due to Hull, who was with CPB in the mid-1980s when he and then-director of programming, Suzanne Weil, brought PBS icon Bill Moyers back into the fold. Moyers had left for CBS and Hull says the journalist “was dying to get back to public television.” Hull and Weil jointly controlled a Challenge Fund that helped finance Moyers’ new production company. It wasn’t long before Moyers produced his landmark PBS series with mythologist Joseph Campbell.

Hull hasn’t lost his belief in the medium he’s given his life to.

“I personally believe public broadcasting is more important to America today that it has ever been. We have the only channel that in my view consistently brings top of the line cultural programs, unbiased news programs, documentaries, the best that our culture or world culture has to offer. We are presenting the best media there is.

“That isn’t to say commercial broadcasting doesn’t do wonderful things, they do, but we do it without the tyranny of ratings and profits. We want to edify and inspire.”

For example, he says the recent PBS documentary event Half the Sky is something the networks would never do.

He marvels at TV’s technical advances but he says it’s still all about telling stories.

Hull will discuss highlights from the NET archives on Sunday, October 14, from 2 to 4 p.m., at the Joslyn Castle. The event is free.