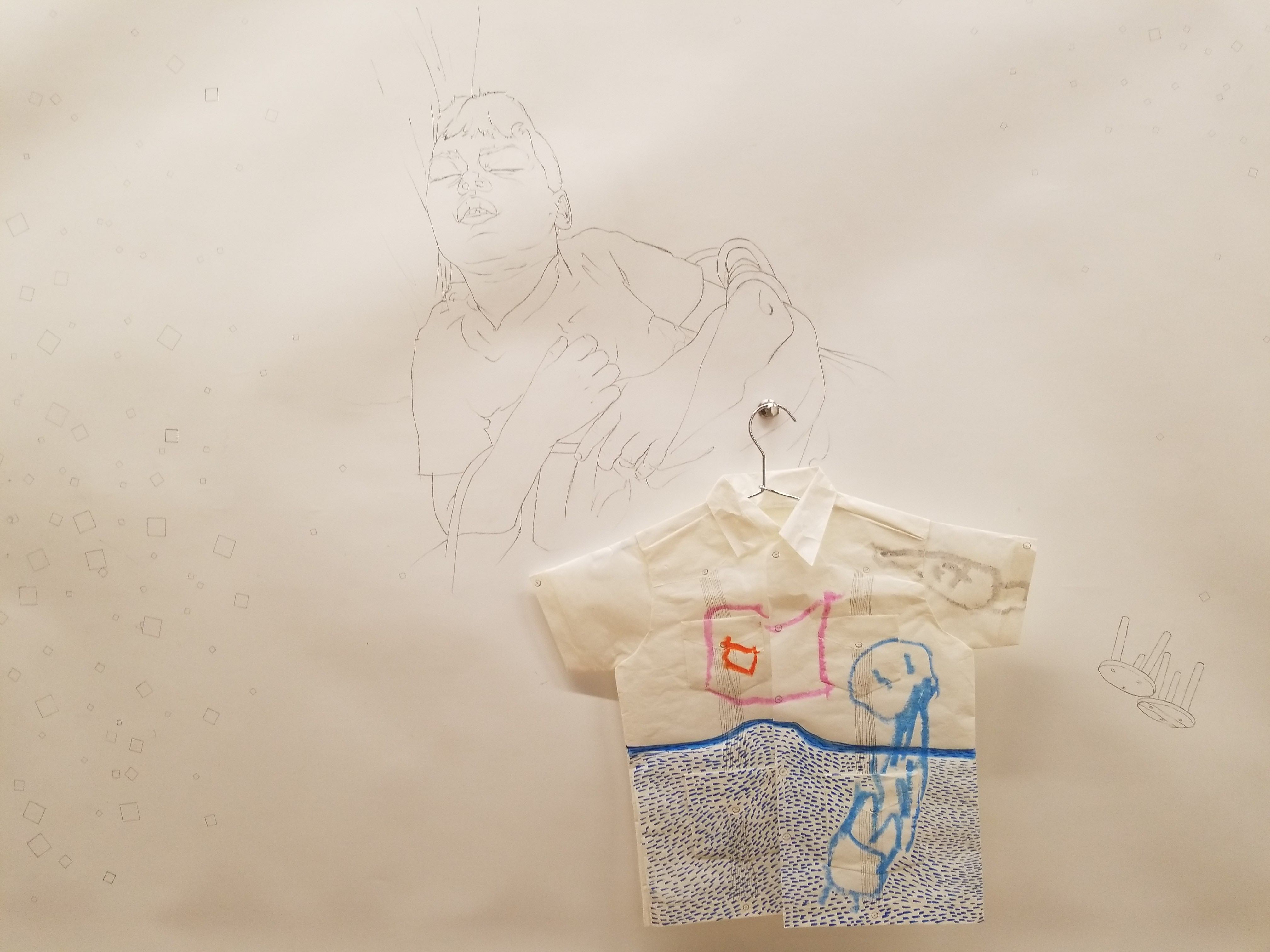 We live amongst a network of boundaries. Some are literal barriers, some are agreed upon imaginary lines and some self-inflicted and internalized. No matter their manifestation, boundaries are the way we are contained. We enclose ourselves with limits, expectations, fears and, most significantly, our own consciousness.

In the art exhibit Shaped by the Other, on display at the Union for Contemporary Art through March 2, multi-media artist Santiago Cal captures the way he interacts with his boundaries both geographical and cultural. The exhibit offersa variety of drawing, sculpture, music and video,

Inspired by his family, Cal, An Associate Professor of Art at University of Nebraska – Lincoln, speaks about how we are shaped “through consideration and change” and that as a father, he says his identity “is no longer something that’s dictated by me.”

Our lives are shaped by external forces all the time and often negatively, but there is also a realization that we all have an ability to affect someone’s life positively through small acts. Cal often uses the figure to understand this shaping who he is, who we are, what makes us us. We construct form and substance of eachother based on our assumptions. We change who another person is to us based on what we put on them: expectations, judgments and consequences.

The use of the machete helps illustrate this idea. In Central America, as Cal describes it, one is given a machete at childhood and it is a possession for utility and one for protection. Cal experienced the civil wars in Guatamala and El Salvador from a somewhat comfortable distance, but the sight of the machete in that context elicited a new consideration. When new people were encountered, the question became: is that machete functional or dangerous? 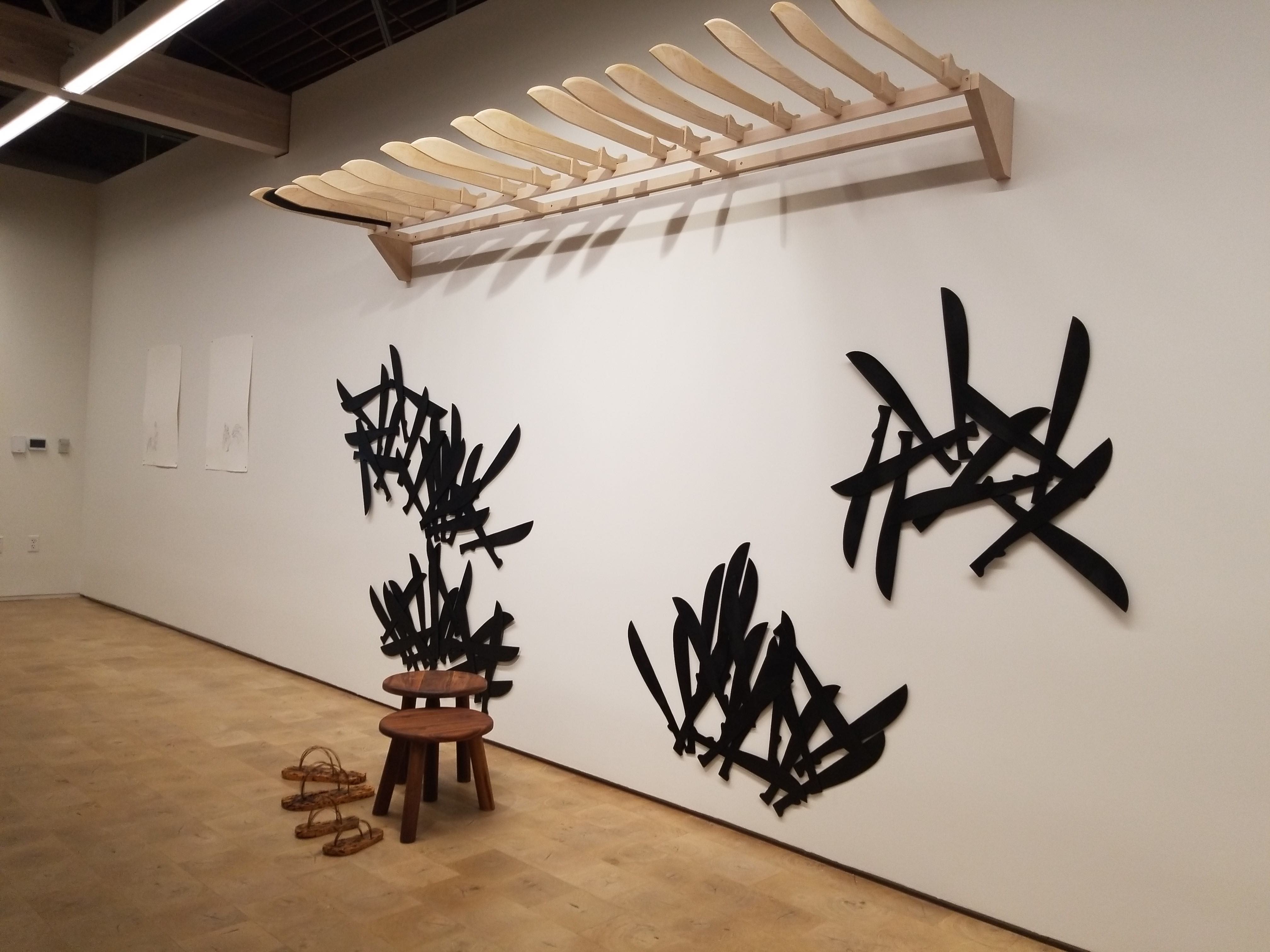 Again, the figure is created based on our own assumptions. If we see the machete as a mechanism to get through tall grass we welcome, support or trust, but if we see it as a threat we push away and accuse. So often, the commonality in us turns suspect. In “One Ant at a Time” Cal uses wooden machetes as a barrier overhead and in clusters at the front. The addition of two stools and discarded sandals that feel like the most fragile of barriers between your feet and the ground. Depending on which side of the machete, or the barrier, you are on tells you where you may stay.

Another cultural symbol that rings strong in Cal’s identity is the guayabera shirt. The shirt is worn by everyone- from peasants to politicians. It is indicative to the culture and worn with pride. The signature four pockets also offers utility, but to Cal these pockets carry more than just objects; it is what one chooses to fill them with.

These pockets hold dreams, fears and expectation. We use cultural and personal symbols and to carry so much of who we are. Constructed in paper, the guayaberas look both crisp, sharp and impeccable while also seeming fragile. The transparency of the material both seem to allow the fluidity of wear by all as well as the ease of losing control of one identity for another.

The guayaberas of “Shaped by the Other” add childlike drawings, a whimsical take on an otherwise tenacious component of Central America’s cultural history. The backdrop of this piece includes drawings of Cal’s family asleep. Together, these speak to Cal’s interest in the muddling of boundaries of the unconscious.

During sleep, the muscles relax and the body begins to do unnatural, automatic things. In sleep, our true existence shows itself when the boundary of consciousness and control goes away. Whether through sleep or the unfiltered wonder of a child’s mind, we can find ourselves in a sort of in-between.

Overall, this artistic journey of self-discovery was challenging as Cal navigated what it meant to identify as a Mayan/Hispanic immigrant and as an American, and now as a father. But ultimately, he realized that more of us live in this in-between than don’t. We attempt to maintain control, but in their most natural state our boundaries live in a constantly shifting space. It is what the world is.

Undoubtedly, the themes in Shaped by the Other can connect to conversations about immigration, race and otherness. Cal approaches this work through the lens of an immigrant and the takeaway from this exhibit is a sense of how we regard each other, how we see ourselves based on how we see others and, ultimately, how we contribute to either a boundary or an in-between.

Boundaries only work if we allow them to. They can unleash energy when brought down, they can make movement impossible, they can give us either a real or false sense of security. But, ultimately, who we are and who we’re capable of being are far more important to the genuine removal of boundaries and a great connection in the in-between.

Shaped by the Otheris on view through March 2 with an artist talk on February 23 at 2pm at the Union for Contemporary Art, 2423 North 24th Street. For more information, visit santiagocal.com or u-ca.org.