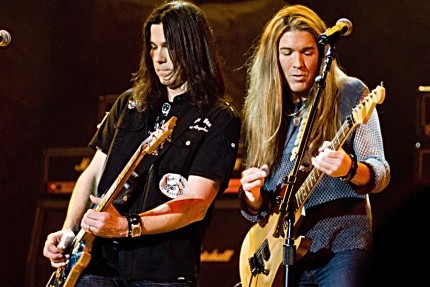 March 3 Slaughter w/ Vinyl Haze Whiskey Roadhouse, Horseshoe Casino, 2701 23rd Avenue, Council Bluffs 8 p.m., $20, caesars.com/whiskeyroadhouse, (712) 329.6000 Much like the city they hail from, Las Vegas, Slaughter caught the coattails of the last train bound for a generically overexposed pop culture bandwagon that somehow survived its death throws only to become an overexposed pop culture novelty — kind of like a Criss Angel magic show. Be entertained at your own risk. But hey, Vegas is still Vegas; you have to try it at least once. Formed in 1988 by vocalist/rythm guitarist Mark Slaughter and bassist Dana Strum, Slaughter briefly reached stardom at the tail end of the ’80s Glam Metal movement with their first album, Stick It to Ya, spawning several hit singles including “Up All Night” and the awesomely epic power ballad “Fly to the Angels.” Touring the metal circuit for over two decades with other relic bands from the genres past, Slaughter is sure to offer a well-rehearsed night of throwback glam metal. Long hair and leather jackets not provided.