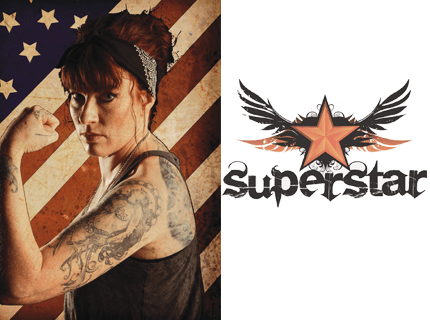 The art of tattoo has always fascinated Sioban Kozisek (“Chevy”). She got her first tattoo when she was attending boarding school in Ireland. “I was 16-years-old and I had a fake ID to say I was 18,” Kozisek recalls. “I found some little dive shop above a pub in Cork City and decided to get a yin yang on my shoulder. This massive bearded man with a Celtic design on his chest had me sit backwards on a broken chair and lean forward. The yin yang came out all distorted and didn’t heal very well. I totally deserved that for fibbing about my age and not knowing any better.”

As she got older (and was actually over the age of 18), Kozisek started getting more and more. It’s been said tattoos are like children. Most people have a few and once you have one, it’s hard to stop.  “A good tattoo, an original piece, is really amazing if you think about it,” she says. “It’s not like you have an eraser or a fresh piece of canvas to go to if you make a mistake. To watch a tattoo artist work is fascinating.”

For years, tattoos were almost looked down upon. There was a negative stigma attached to them. After all, most people thought only criminals, gang members and Hells Angels had them. Now they are more common and Kozisek believes the stigma is gone. As a Master Ethestician and make-up artist at Sirens in the Old Market, she does recall a time when it wasn’t that easy.

“I remember starting in the beauty industry in the early ‘90s,” she explains. “If you had tattoos then, well, they had better be hidden. Now it’s almost part of the dress code. Just like clothes and accessories, tattoos are an expression of ones individuality. I can’t really say I have experienced prejudice because of them, but they have defiantly been a conversation piece. As far as being judged for having them, I haven’t felt that way or else I wasn’t aware of it.”

Fortunately, her job allows more freedom than most places when it comes to appearance. In fact, it’s encouraged to stand out.“I guess it would depend on the salon and the clientele,” she remarks. “Being down in the Old Market Sirens, it is located in Omaha’s arts and warehouse district. Our team is a very diverse group of individuals. From very tattooed to none at all, the salon is a melting pot of all kinds of professionals and clients.”

Kozisek was born in Denver, Colorado. Her father, Dr. Michael Naughton, is a biochemist. She lived in Blackpool, England from the ages of 3 to 5 and Denver from 5 to 12. She attended Bandon Grammar School in Co. Cork Ireland from the time she was 13 until she moved backed to Denver at 19 to attend the Colorado Institute of Art (CIA) for the Music and Video business program. She met her husband at CIA and they have two children. Together, they moved to Nebraska in 1996. She went to Capitol School for Esthetics and has been in the salon and spa industry for over 14 years. In 2006, she won the award for Best Esthetician in the 2006 Reader’s Choice Awards. Her unique leadership qualities as a manager inspire her staff to attain the highest standards of excellence. As far as the nickname “Chevy” goes, it’s just something that happened.

“My real name is Siobhan, which means Shavon,” she explains. “It’s an Irish name with traditional Celtic spelling. When I moved back from Ireland, I had a lot of people calling me Chevron, Chevette, etc. Chevy just kind of stuck and it suits my personality.”

This year, along with the rest of the Sirens team, Kozisek was invited to attend the Best in the Midwest Tattoo Convention. “I attended all three days the first year,” she says. “Last year, I was out of town working on a film. I’m really excited to attend this year with the Sirens team. It’s an amazing convention with incredible talent!”

Armed with seemingly endless amounts of enthusiasm, Kozisek stays busy. She enjoys live music, traveling, doing make-up and special effects for film, video, and photo shoots. She’s currently working as a co-producer on the documentary, There Will Be No Stay, which is a film about the men who are tasked by society with carrying out the death penalty. It’s a first-hand look at executioners, the pressures they’re put under, and the unbearable toll the act of taking another’s life has on their own. While she’s not consumed with everything she has going on, she’s plotting out her next tattoo.

“A lot of people have many tattoo pieces done by the same artist,” she says. “I am collecting the same piece done by different tattoo artists. Right now I have four sirens, or mermaids if you will, done by four different artists, each completely different from the other. I guess I’ll keep my eye out for that unique style of an artist to do a fifth siren.

“Let’s hope tattoos are not a trend,” she adds. “Trends come and go. A tattoo is a lifetime commitment.”