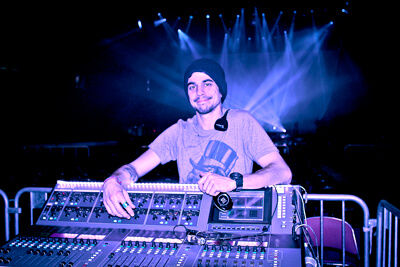 Neal Duffy is the guy making your concerts sound crisp and pristine. He’s making every instrument and vocalization reverberate across the auditorium. Currently, he’s on tour with Neon Trees, who will open for Maroon 5 in Omaha March 3. He’s been with Neon Trees for two years since he caught his big break.

Duffy received his education in sound at the School and Audio Workshop in Ohio, then transferred to Iowa Western, where he got on-air experience. “Working with audio and sound is a science,” Duffy says. “Some people don’t realize that.” While the science behind sound will stay the same, the tools vary.

His first work with a live band was with the Jazzwholes. Duffy also toured with Tilly and the Wall, an act Omaha knows well, while earning his certification to be a yoga teacher. Then, Marciano, the manager of the Tilly and CSS tour, offered him a break with Neon Trees.

Duffy had first encountered Neon Trees back in May 2010 when they opened for 30 Seconds to Mars. That was the first time Neon Trees had experienced Omaha.

“I was ready to take a break from the music industry before this,” Duffy explained. He had become disheartened with the materialism and creative compromise that has become rampant in the music business. So Duffy took the offer he wasn’t necessarily expecting, but he still does yoga to this day.

“Before Neon Trees, I was used to mixing for clubs of maybe 5,000,” Duffy said. “Now it’s arenas of 20,000.” Sound systems are different everywhere, but Duffy wouldn’t want it any other way because he firmly believes you should always be learning. “I want a job that lets me learn every day. Otherwise, I wonder why I’m doing it.”

Duffy needs to have heard the album he’s mixing live inside and out. In order to recreate it live, he examines all the layers of production to see how a live crowd could best hear it.

Duffy said the largest hurdle in his work is being completely satisfied with your mix that night. “Audio boards have endless options. I feel like I could always tweak something and make its sound different or change the levels.”

One of Duffy’s first tours outside the Midwest was with the Clumsy Lovers, a Canadian Band. This took him to the West Coast and Canada. Duffy has also been to Asia, Australia, the whole U.S., and Europe. His favorite destination was Bali, where he surfed the royal blue waters. Other favorites include Japan, Spain, London, Paris and the Great Wall.

Duffy is a hobbyist photographer on the side when he’s not doing sound, being DJ W.E.R.D or at Lotus House of Yoga.

Duffy’s dream was to run sound at Madison Square Garden, one of the most massive arenas in the world. That just happened on Feb. 16 on the current tour with Neon Trees and Maroon 5.