Home » Art » The Truth About Caril 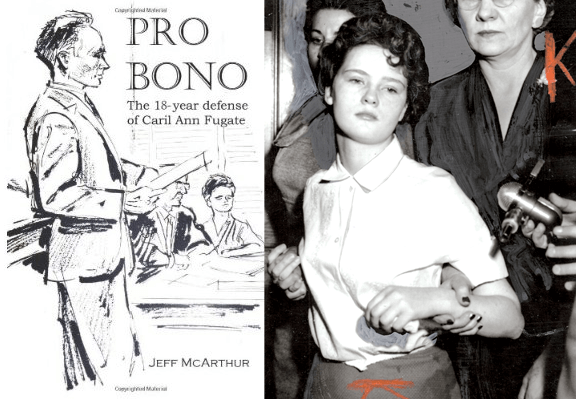 It was the case that shattered innocence and struck fear into an entire nation, inspired artists like Terrence Malick and Bruce Springsteen to create some of their finest work, and would be forever associated with Nebraska. The two week killing spree of Charles Starkweather and Caril Ann Fugate would capture the world and is still debated to this day. Fugate’s involvement in the crime is still in question. Just 14 at the time of her sentencing in 1958, Fugate would spend 18 years in prison before finally being released on parole. Starkweather was executed.

In the new book “Pro Bono: The 18-year defense of Caril Ann Fugate,” Jeff McArthur examines Fugate’s involvement in the initial crime, her trial, her prison life, and the media firestorm that always seemed to follow the case. McArthur has another reason for wanting to investigate the crimes and the woman. His grandfather John initially represented Fugate, and his father James would go on to become a lawyer and help his father in his quest to get Fugate released. The book is as much about Fugate’s crimes and life as it is an examination of and honor to McArthur’s grandfather.

“But most of all this is a book about my grandfather,” McArthur writes in the prologue, “a man who saw an injustice and fought against it for two decades, in the face of how unpopular it made him, even despite the death threats against him and his family.”

The book, although tirelessly researched, reads like an intriguing crime novel. McArthur lucked out with John—represented as a compassionate, Atticus Finch type character—as his protagonist. He’s a man that McArthur describes as a “consummate gentleman, formal, yet warm to everyone he met,” and someone with a “quiet wisdom.”

The 326 page book, filled with research ranging from interviews with people who knew victims to court records, is passionate. Often you can sense McArthur’s obvious personal connection to the people involved, but it never feels biased. Instead the passion comes from a story that’s hard not to fall into.

The book really picks up steam in its seventh and eighth chapters. Chapter seven, “The State of Nebraska v. Caril Ann Fugate: The Prosecution,” is when you can really see the research that went into the story. Elmer Scheel, the prosecutor, had as much zeal as John did, but we are presented a deeply flawed case, one that never should have been presented to a jury in Nebraska (John had tried to get the trial moved but was denied).

Chapter eight, “The State of Nebraska v. Caril Ann Fugate: The Defense,” continues with the massive research of court transcripts. It lends itself to a painfully real feeling and almost puts the reader in the courtroom.

At this point, the prosecution had shifted much of the blame toward Caril, and McArthur presents a young girl—possibly once held hostage and now fighting for her life—who isn’t fully aware of what a guilty verdict might mean for her life. Though the book really centers on Fugate, she’s not heard from until this chapter, where we see court transcripts of her testimony. She’s shown as quiet, shy and as someone who had been brainwashed—the purest definition of a kidnapping victim.

For some, the book’s portrayal of Fugate as a victim is still hard to buy. There are many people in Nebraska who grew up with this story and have their own opinion—most of them negative—but I got the sense reading this book that McArthur was not trying to change opinions but simply to present a different, more personal perspective.

After her conviction, the book goes on to show John working hard on an appeal that was ultimately denied. The case would go all the way to the Supreme Court but was again denied. Caril was offered a commutation to her sentence in December 1968 but would have had to show remorse for her crimes, thus admitting her guilt. She refused, which meant staying in prison until her parole in 1976.

For me, the most fascinating aspect of the book would come in the later chapters, particularly chapter fourteen, “Badlands.” This was one of the first cases with deep public scrutiny and hotly contested facts. Ninette Beaver, a young mother and reporter, would play a major role in Caril’s life and case and is represented here as a tough reporter who gets swept into the story.

Early in the story, the press’ frenzy and initial reaction to the murders is recreated. McArthur does a good job of conveying the fear that almost everyone in Nebraska (and by this point the entire country) felt.

“People were angry and they wanted vengeance,” he writes. Though unbiased throughout the book, McArthur doesn’t shy away from his opinion that the media’s portrayal of them as the new, bloodthirsty Bonnie and Clyde hurt Fugate and her defense tremendously.

One interesting tool that McArthur uses in the book is to use Fugate as the microscope through which we view the family. As the book goes on, we see the McArthurs’ family life change (James had his second child, the author, Jeff), all of which is seen through Caril’s eyes. It’s effective and shows how much Caril started to mean to the family.

In “Badlands,” McArthur chronicles his father’s involvement in Terrence Malick’s classic film of the same name, the TV movie “Murder in the Heartland,” Ninette Beaver’s book “Caril” and Bruce Springsteen’s album “Nebraska.” One aspect that did surprise me was McArthur’s depiction of Fugate’s reaction to these works of art. Many people know the films and songs but as McArthur puts it, this was Caril’s “traumatic reality.”

“Pro Bono” is a fascinating and quick read. Most people from Nebraska are familiar with the case, but the book presents a much different view from what we initially thought. The book moves quickly and McArthur is benefited by his personal connection to the story.

“Pro Bono: The 18-year defense of Caril Ann Fugate” is available at several bookstores in Lincoln and Omaha, and on Amazon and Kindle.

Finding Answers With the Author:

Jeff McArthur had an interesting problem when approaching his new book, “Pro Bono: The 18-year defense of Caril Ann Fugate”: how to be an objective observer to history when three of the main characters were his grandfather, father, and a woman that he grew up with.

The book follows McArthur’s grandfather John as he defends Fugate, and later his father James as they worked to get her released from prison. Fugate was convicted in 1958 at the age of 14 for her role in the Charles Starkweather murder spree. She would be released from prison in 1976.

At the beginning of the book McArthur tells the reader that he wanted to write this book for a number of reasons. First, he wanted to set the story straight about the case and second, he wanted to tell his grandfather’s story.

“It actually was rather difficult,” McArthur said. “When I started this book, I didn’t think it would be difficult at all. I figured that paying homage to my grandfather and setting the record straight would be the easy parts, but I found both to be a lot of pressure because I felt like I had a lot to live up to.”

McArthur says that the massive amount of research was important to present a more rounded picture. “I really wanted credibility,” he said.

“It would be easy for people to disregard the evidence in this since I am part of the family of the defense team. I wanted it clear that what I’m writing in this book is the truth about the case, not rumor and lies like so many other things written about this story. So, even though the story is primarily from the defense team’s point of view, I wanted it to be very factual and as objective as I could make it.”

Still, McArthur admits he did have a few problems when it came to his research. When he came across books, TV shows, news articles, and other stories about the Fugate/Starkweather case he found that most of them were either outright lies or they had based their facts on rumors. “I would get so angry that I would have to get up and pace for awhile.”

The book really shines when McArthur is describing his grandfather. “He was the kind of man who was diplomatic, yet firm in his convictions,” McArthur said.

“He fought hard for what he believed in, even when it was unpopular. He pointed out that Joseph McCarthy was a fraud when people were still cheering for the man, sued Errol Flynn while he was still a beloved celebrity, and defended Caril Fugate even when the whole state said she was guilty. Yet through all this, he kept up a dry sense of humor, and was able to charm people he talked to. He was patient, very intelligent, extremely kind, and modest.”

But McArthur is honest about his grandfather’s flaw, which he says was him being distant. “He was often lost in thought,” he said. “He would pace around the house talking to himself and flipping a coin, or he would roll it through his fingers. Of course, this was also part of his genius as a lawyer and how he would think through things.”

Most of McArthur’s research came from “hanging out with my dad,” he said. “He’d casually mention something about the case I had never known.” It was the tiny details that surprised him the most when writing the book. “I’ve known all the broad stokes since I was a kid.”

McArthur lucked out during his research, though, because he had grown up with the case.

“As a baby my parents took me with them to visit Caril in the reformatory, and she came to our house to visit while I was a child.” The case files were available to him while working in his dad’s law firm as a teenager. He’s also known Ninette Beaver, the main reporter involved in the case, for decades.

“When it came to researching the book, I really just had to refresh my memory by pulling out the files, asking my parents questions, making some calls to attorneys and some of the other people who were involved, talking to Ninette.”

His biggest job came in transferring the entire trial transcripts to PDF, which took him an entire week at the library, five to eight hours each day. McArthur says that the biggest reward when writing the book was learning about his grandfather, particularly the personal aspects.

“When growing up, we take these people for granted, never seeing them as human beings, and in the case of our grandparents, they’re so often gone before we realize how amazing they are.”

McArthur maintains that with this book he isn’t trying to change people’s minds but instead give them a different perspective to look at Fugate’s case.

As for what he wants people to take away from the book, he says that his primary purpose was to pay homage to his grandfather, who was “a great man with or without this case.” But he also wants the truth to come out about Fugate’s journey and for people to finally read the truth.

“This to me is more important than the conclusion that they draw from it. Whether they see her as guilty or innocent or somewhere in between, I want people to know the truth about the story.”

“Pro Bono: The 18-year defense of Caril Ann Fugate” is available now at several bookstores in Lincoln and Omaha, and on Amazon and Kindle.