Home » Art » Three Up and Three Down with Goth Ball’s Snake Island! 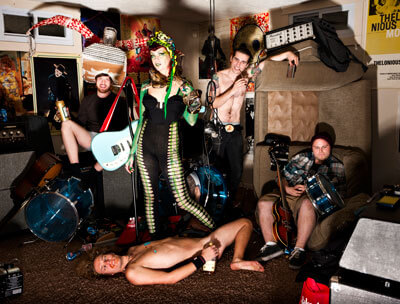 Hard rockers and Omaha Entertainment Award-nominated Snake Island!, headline this year’s annual Goth Ball — and fittingly so since this year’s GB theme is “Venom.” Lead guitarist Allan Schleich took time to discuss with The Reader the band’s  first studio release, nudity and what and what makes their sound unique compared to other bands in Omaha.

You guys had a photo shoot for the Goth Ball show this Saturday that you’re headlining. I was told that it was a nude photo shoot. Was this your first experience posing in the nude for pictures professionally or otherwise?

(Laughing) Only one of us ended up being naked in that photo shoot. We have not. That was our first naked photo shoot.

You have a new CD that you’re about to release. How do you feel it stacks up against Snake Island!’s last release?

It’s not a CD we’re releasing. It’s a 10-inch vinyl with a digital download. This is Snake Island’s first release that we’re selling. We had a couple of demo tracks that we put up on our Myspace and Reverb Nation. They were really rough, recorded in a room with a single microphone. We had our friend Justin Haze come up here from Kansas City to record us. It was his first time recording a band other then his own. Van Sloan at Focus Mastering did the mastering for us once we completed the overdubs.

One thing I find unique about Snake Island! is that you guys run your vocals through a guitar amp. What was the idea behind that?

Part of that is none of us are that great of singers. (Our lead singer) has definitely improved by leaps and bounds. When we first started out, we were like, “We need to do something about this.” Originally we started with reverb and a little distortion played through a PA. Then we realized that some of the old blues guys would sing though harmonica mics like Papa Lighfoot. We though we could emulate that and hide our roughness of singing. It’s been working very well for us. I haven’t seen very many bands do that.