An exhibition of Barbara Simcoe’s paintings, drawings and digital photographs has opened at the Sunderland Gallery in the Saint Cecilia Cultural Center at 701 North 40th Street. Titled Threshold, the show reflects Simcoes’ ongoing interest in travel and architecture, often in exotic locations with vibrant mythical and cultural references. “I continue to be interested in gesture, dynamic positioning with undertones of tenderness and sometimes power,” she said. ‘A contradiction, but nonetheless the settings are mostly from travel, a lot of architectural fragmentation, sky and water, openings, liminal spaces. Hence, the title of the show, Threshold.” The figurative imagery Simcoe favors is exclusively of women, and it is these feminine archetypes that she is most interested, particularly as “vessels of creativity, as intercessor, as of the earth, as mother, as primal aspect of the feminine/masculine dichotomy, as the complement of masculine divinity. These are the subtexts of my work.” That said, her works are characterized by a sublime complexity and formality. She may use familiar iconic imagery, but nevertheless the resulting montages are Simcoe’s daydreams and consequent creations. Which is to say, their mythos is personal rather than universal. They may remain a mystery to the viewer, and no doubt one of wonder to the artist, but their very existence encourages one to create their own cosmos out of the chaos that surrounds us, not unlike that of Simcoe herself in Threshold, which continues till Oct. 23. 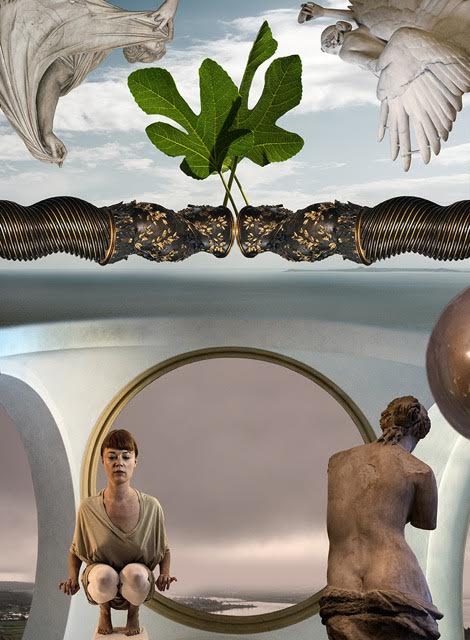