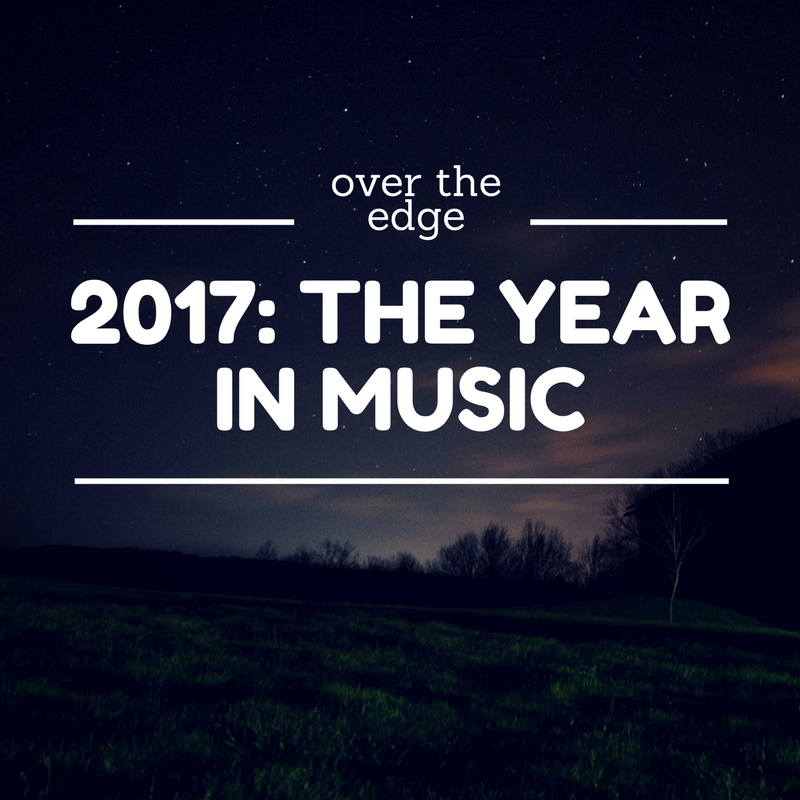 Sub-zero wind chills. Daunting protests and politics. Killer Influenza. Potholes. Might be time for some art that provokes a smile. The kind that doesn’t take itself too seriously. The kind that takes some shots at conventions and pretense. The kind that makes you think, but doesn’t lecture.

Ease on down, then, to Darger HQ on Vinton Street to see an exhibit of works by Lincoln’s Craig Roper and Garric Simonsen, from the Great Northwest, titled Two Places at Once.

These two accomplished artists have a propensity for irony; poking fun at the art world, themselves, art in general, and throwing a few curveballs. Both artists take you to task, but with an awry smile and a snicker.

Much of Roper’s work incorporates words; phrases and colloquialisms, not unlike Barbara Kruger or fellow Nebraskan Ed Ruscha, but with the loose freedom that comes with expressionism and surrealism.

The text is both commentary and question, asking viewers to rethink their opinion of the piece, the references and art in general. Roper’s work might make you laugh, smile or maybe just catch you off guard.

The artist starts with three multi-media paintings on store-bought, stretched canvas. The similar paintings from left to right are titled “Super”, “Super, Super”, and, not one to ruin a good thing, “Super, Super, Super.” Oddly, there is no price difference related to the number of “Supers”.

Each canvas sports a variation of clown-orange, spray-painted spots and blue lines or symbols, and random fabric pieces, holes (bullet-type), and plastic and gaudy vinyl letters.

“Super, Super, Super” has been left in its original packaging, label and all. The work is then finished off with a simple mirror, making it almost impossible to look at the piece without you becoming the main attraction.

Following these are framed text pieces, less visual than they are literary. In “Dirty and Mean” and “Black Plastic,” Roper simply frames worn and smudged pages, like journal entries or found letters, presented as prose poems for your perusal.

“My Favorite Day,” looking like a page torn from a child’s coloring book, has Pooh and Piglet, in character, but twisting your expectations when Piglet lapses into profanity. 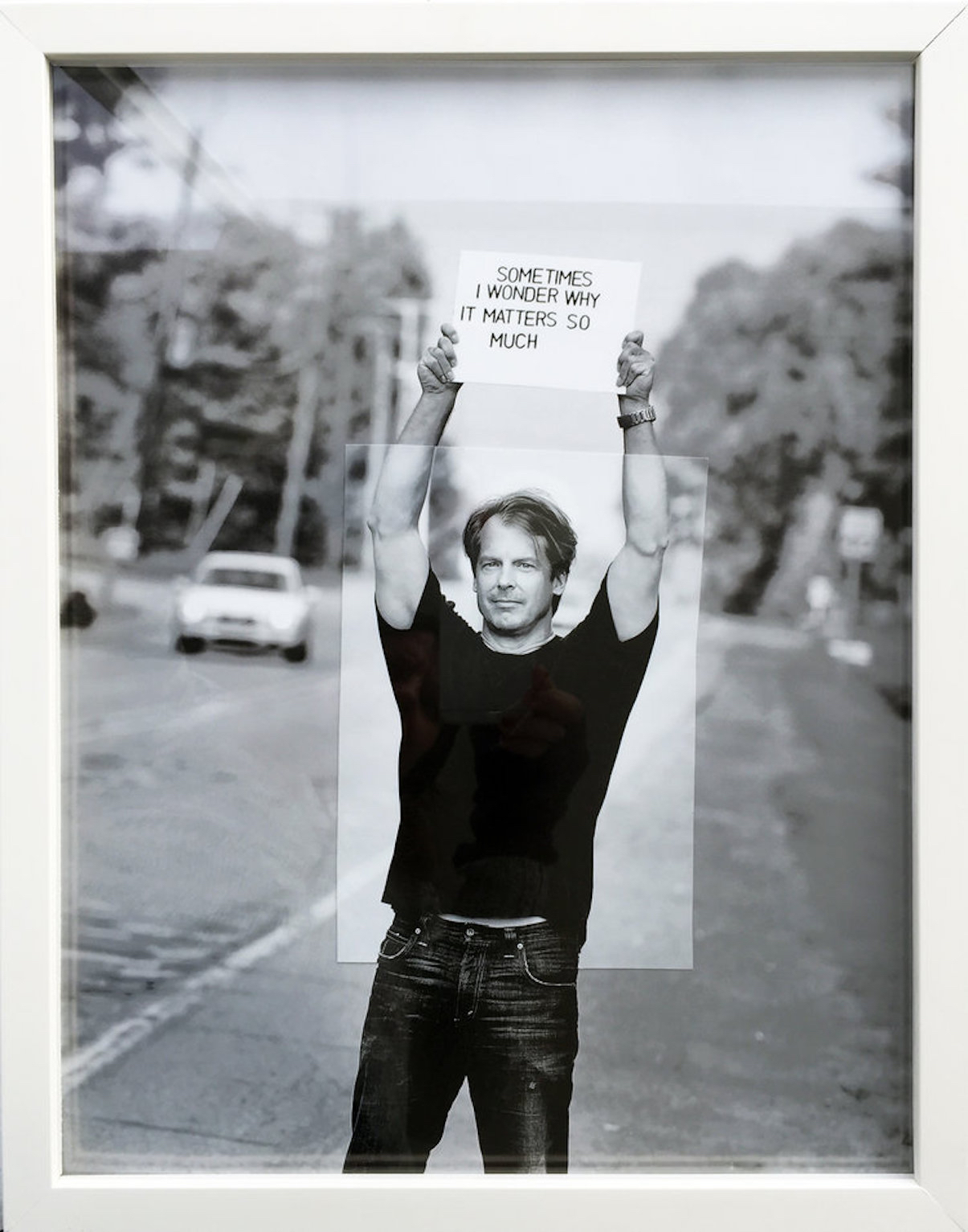 The final of the four text-specific pieces is entitled “Why It Matters So Much”. This is a simple, b & w photo of a man in the street holding a sign reading “Sometimes I wonder why it matters so much.” Is this melodrama? It can’t just be a picture of a guy with a trope. Or, as the title infers, maybe the problem is the word sometimes. Does the title explain the work, or the work explain the title? Maybe both.

Roper’s wit is dry at times, and sometimes elusive; but as evidenced from past exhibits, that is his métier, part of his message. He twists and turns the popular and mundane onto its head.

His guileless playfulness is full of playful guile. He leaves his work accessible but also forces a viewer to reassess ingrained opinions and initial emotional responses to the work. 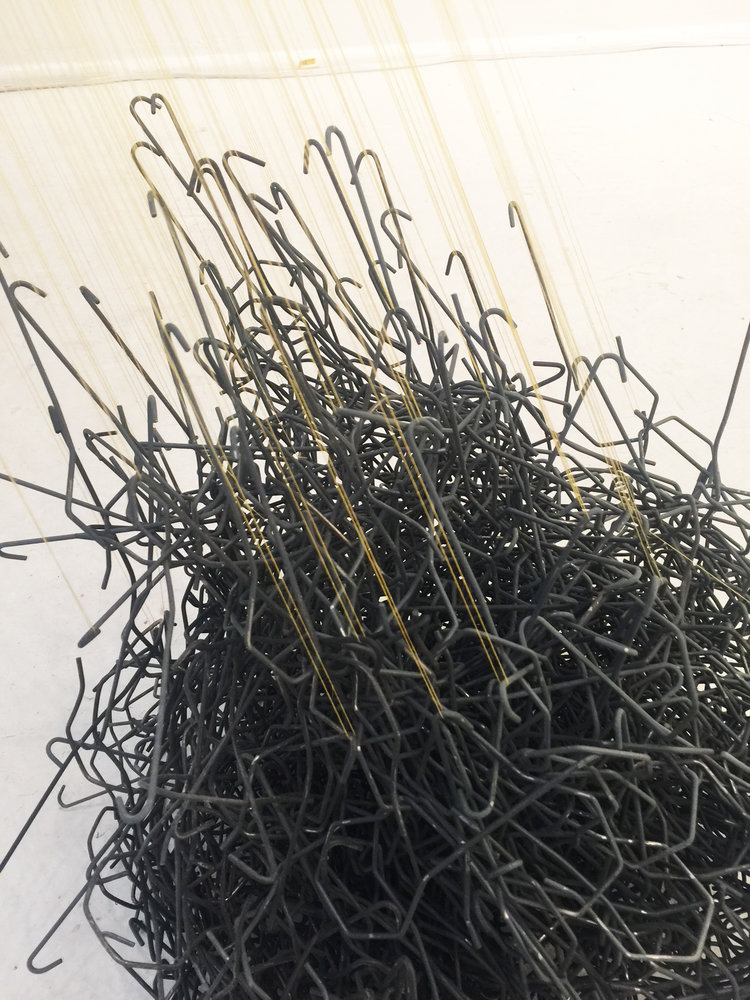 Be wary of the works installed on the floor. These untitled pieces are from his “Infinite Landscapes” series. By photographing a simple photo of a view, or an everyday subject, like a tire in the weeds, and combining it with a mirror and an unremarkable thing, like a rock, these little assemblages becomes sacred and cryptic.

The photo becomes unknown context and travelogue, and the item becomes a clue. The moment you find yourself leaning too far into the piece, you become part of the scene, intruding on the space. You may find yourself jumping back, so as not to intrude on this little sacred diorama.

Garric Simonsen is an award-winning artist and musician from Washington State. Simonsen is no stranger either to injecting humor in his work, if slightly more reserved. His “Postcards 1” through “Postcards 9” are nine similar collages, using unrelated vintage postcards in groups of three or four. 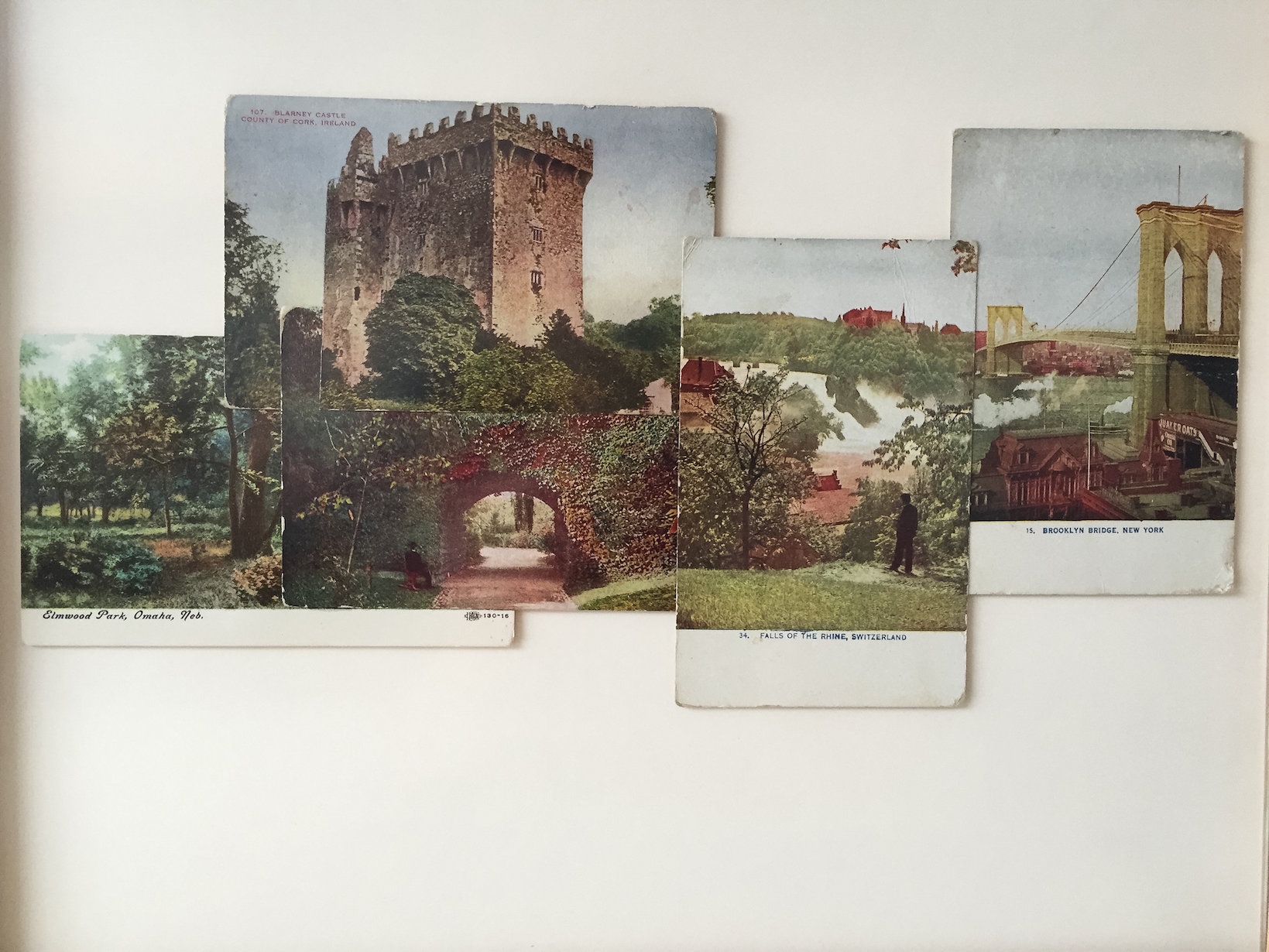 The images are arranged to “match up” with each other, joining tree, horizon, or building, thereby creating a new, fantastic landscape or cityscape. The collages require some close examination to appreciate the nuances, but once discovered, they become delightfully odd little scenes.

His other photographic works consists of a series of digital reproductions of vintage cabinet cards, or their smaller cousins, cartes de visite. These were popular portrait photos mounted on card stock and traded and collected in the late 19th and early 20th centuries.

Simonsen adds an element of pentimento, (an Italian term for underpainting that shows through) by digitally sketching/painting onto the image. Simonsen’s Naïve style of drawing makes each historic portrait look as if a child, in a fit of creativity, got to them. This also adds an element of family and relationships, and the subjects become more familiar, less distant. 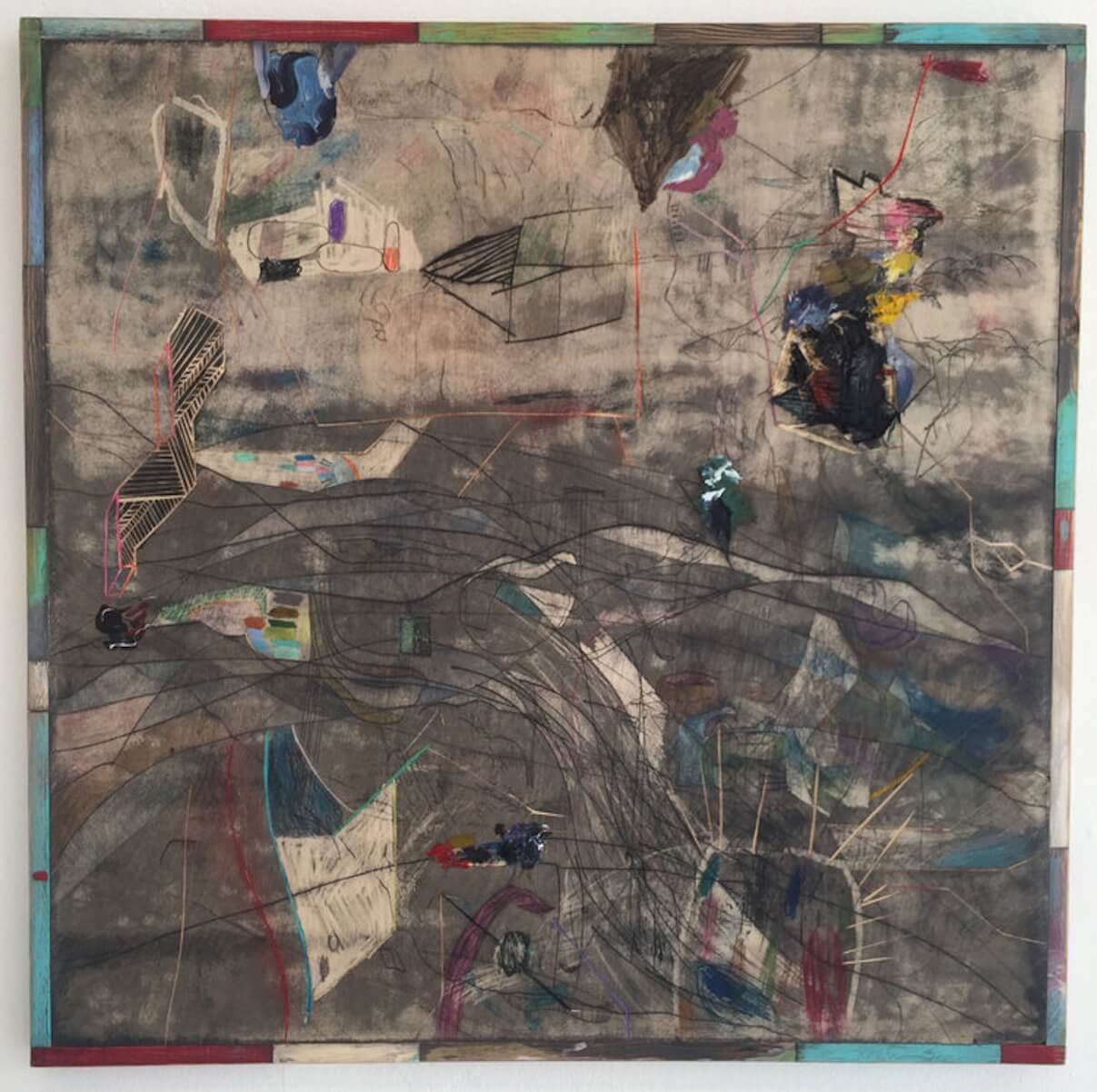 The artist’s multi-media drawings on board are complex, mixed-media, surrealist sketches of life; mundane objects, and surreal juxtapositions and with just a touch of Kandinsky or Miro. The wood panels are expertly rendered and covered with line and color, some carving, some of the marks incised. “Me and You, You and Me,” a collaboration between the artist and his young daughter, Indie, goes farther into the abstract than the others. These are deliciously busy, cryptic studies and alluring journals, provoking memory and association, but leaving much undefined.

There are no collaborations here between the two artists. Instead, the show is more of a two-person overview of the artist’s work. An enjoyable, entertaining respite from the cold weather and drama of the world. Two Places at Once, featuring the works of Craig Roper and Garric Simonsen, will be exhibited at Darger HQ through March 4, 2018. Further information is available at https://www.dargerhq.org.