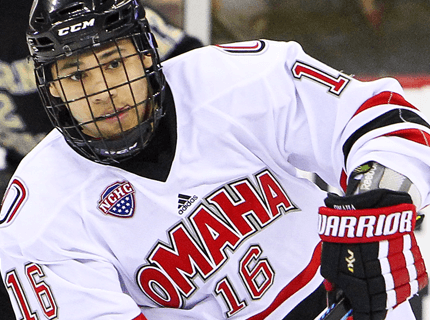 Since launching hockey in 1997 to subsidize its non-revenue generating sports UNO’s netted a nice return on investment. Maverick hockey crowds rank among the best nationally, with annual ticket revenues of $2 million. When the school dropped football and wrestling in 2011, it added pressure on hockey to be the signature sport.

The University of Nebraska at Omaha has enriched the city’s hockey legacy. The minor league professional Omaha Knights (1939 to 1975) began the love affair. The amateur Omaha Lancers (1986 through today) continued it. UNO found its niche as Neb.’s only collegiate hockey team. Despite gritty performances and many upsets its first 18 seasons. UNO didn’t emerge as a title threat. Until perhaps now.

Coach Dean Blais, tasked with making Mav hockey nationally relevant when hired in 2009, has guided UNO through conference changes, player suspensions, stars leaving for the NHL and solid if not stellar play. Now, for the first time this late in the season, he has UNO contending. His team’s defeated several highly ranked clubs, splitting four games, three in overtime, with perennial power North Dakota, where Blais won two national titles.

UNO, 17-10-3 at press time, climbed to No. 4 in the Division I ratings. It’s led the powerful National Collegiate Hockey Conference most of the year. Entering the final regular season home series versus Colorado College at CenturyLink Center, UNO hopes for momentum that carries into the NCHC Frozen Faceoff and the NCAA tournament.

As UNO hockey enters the local sports conversation reserved for Husker football and Bluejay basketball, it may establish itself as a must-see attraction and traditional power. The timing’s apt since it gets its own facility next year when the UNO sports arena opens on the Ak-Sar-Ben campus, where the Knights played. Touted underclassmen helping drive this special season were recruited to the new venue.

Sophomore center Jake Guentzel is enjoying the ride, “We’re more on the map, more fans are coming, so it’s pretty special.” He’s not surprised by the success. “I thought we had the players to do it, I just didn’t know if we had the experience. We’re bottom-heavy with freshmen and sophomores but we’ve adapted pretty well. We’ve been fortunate we’ve had the opportunity to play and we’ve taken advantage of it.”

He says preseason predictions of UNO finishing sixth in the league provided motivation. He credits an early road trip to Western Michigan, where UNO got a sweep. as a confidence-booster and bonding experience. The right mix of leadership has team chemistry just right.

Senior goalie Ryan Massa has waited four years for UNO to break out. “It’s nice to finally see all the hard work pay off for the guys.” He feels a humbling exhibition loss to Northern Alberta Institute of Technology in October was a necessary rude awakening. “It kind of opened the new guys’ eyes to understand the level we’re playing at and helped them grow and mature a little bit faster than maybe anticipated.”

Senior forward Dominic Zombo likes this team’s make-up. “I do see a component I haven’t seen in the past. We’ve got a really tight-knit group. We don’t have any passengers here, nobody’s just going through the motions, everybody’s here to get better, to win games. Every single guy’s committed to their job. That’s what makes us so competitive as a team.”

Blais doesn’t know if UNO’s truly arrived but he’s confident it soon will.

“I would think so but you never know from year to year. This is a special group of guys and for them I hope we win a league championship, get to the Target Center (home to the Frozen Faceoff), advance to the national tournament. Those are benchmarks for a program and our seniors know they’re paving the way for the underclassmen. Hopefully getting to the tournament isn’t a big accomplishment, it’s an expected accomplishment every year.

“We have a new arena coming that’s going to take the program to another level.”

“You can tell people hockey is very important to your school but if you don’t even have a place you can call home and practice in, it’s difficult to get the kind of talent in here you ultimately need.”

He says the arena will put the program on near equal footing with its stiffest competitors.

“When I hired Dean I really wanted to have somebody who’d been there, done that, who knew what it took to win at the highest levels.

There’s built-in disadvantages to being in Omaha, so far from hockey hotbeds. I just feel good we’re finally able to give he and his staff some tools necessary to assemble the kind of talent we hope to have here.”

Having its own intimate space will benefit UNO, which shares the huge CenturyLink with Creighton. The average hockey crowd of 8,000 downtown still leaves the venue half-empty. That same crowd fills the new arena. It should spike demand from fans and corporate sponsors.

Die-hard hockey fan Ernie May, who’s never missed a UNO home game, says, “I can’t wait to get into our own building. I think that’s going to be fantastic and make the interest grow.”

“Clearly this will be the best opportunity we’ve ever had to have a branded-out facility of excellence our student athletes can compete in,” says Alberts.

Omaha hockey historian and former UNO sports information director Gary Anderson says, “They’re going to go into an arena exactly the right size they need for the fan base they’ve created.” He says there was never any doubt Omaha could sustain college hockey. “When the program was born you still did have a lot of old-time hockey fans and the Lancers were around the peak of their success, so consequently UNO built a really good fan base right from the start.”

That loyal base bodes good times ahead.

“I’ve been absolutely amazed and humbled by the support UNO hockey fans give to this team, even in some pretty poor years,” Alberts says. “Our fans are hungry and we’re hungry to give them what they want, which is a consistent winner on the ice.”

May enjoys that the Mavs are meshing to put themselves in position to make history: “For me this year almost has as much excitement as the first years we had hockey.”

Blais is trying to ensure his team attends to all the details heading into the intense post-season, where little things become magnified and championship teams find ways to win. Getting swept on the road at St. Cloud State (Feb. 20-21) resembled the late season swoons UNO’s suffered in past years.

“I don’t know if we have any more than we’ve given already,” he says. “How many times can you go to the well? My teams at North Dakota could operate at 70 percent and still win. We’re not there yet. Our margin for error’s slim. We’ve got to be all engines going, we can’t have one engine not running. We’re darn close. It starts with recruiting and we’ve been lucky enough to land some dandies.”

Even if UNO should reach the top, he says, “it’s one thing to get there, it’s another thing to stay there.” First things, first.

Massa says, “Every single one of us believes in our potential. None of us doubts we can be playing at the Boston Garden (site of the Frozen Four) competing for a national championship this year. We’ve played against the best all year and we’ve done well against the best.”

Zombo can’t imagine what a UNO hockey title would mean.

“I wouldn’t be able to explain. I’ve never been a part of anything like that that’s a dream.”