Home » Art » “We All Live In a Yellow Submarine” 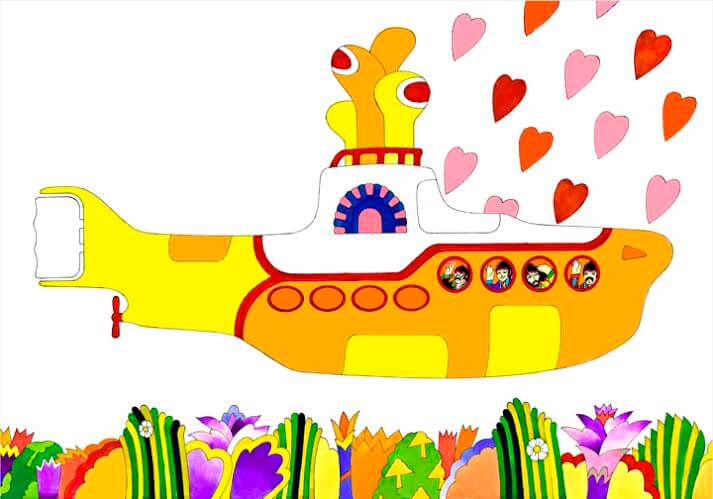 The legendary Ron Campbell, Director of The Beatles 1960’s Saturday-Morning Cartoon series and animator of the film Yellow Submarine, will be visiting Omaha for a special exhibit. Not only will Campbell’s original Beatles cartoon paintings created specially for this Gallery 72 exhibit, but new Beatles pop art pieces will be created live. The Beatles Cartoon series aired on ABC from September 25, 1965 through spring of 1969. In 1964, the music of America was changed forever by the Beatles’ performance on The Ed Sullivan Show, where they performed for 73 million people and began dominating the US pop charts for years. They continue to be the most celebrated musical group in Rock History. The Beatles Cartoon series received outstanding ratings in its time slot and was a way for the children of America to be introduced to this iconic music. Al Brodax, Yellow Submarine Producer, released a book: Up Periscope Yellow: The Making of the Beatles’ Yellow Submarine and within its pages he gives Campbell a great deal of credit for saving the movie and tying it all together at the last minute.

Now Omahans have the opportunity to see the man that directed and animated this series, and many more, in action. This free exhibit features this work and so much more and the best part, all of the work will be available for purchase. With a 50-year career in animation, Campbell has a multitude of other iconic cartoons he was involved with including characters and stories loved by so many. Scooby Doo, Rugrats, The Smurfs, Winnie the Pooh, The Flintstones, The Jetson’s, George of the Jungle, Teenage Mutant Ninja Turtles, Goof Troop, Krazy Kat, Ed, Edd & Eddy and more. Campbell’s former studio was awarded a Peabody and an Emmy for his work in children’s television. Since retiring Campbell continues to paint subject based on the animated cartoons he has helped bring to the screen. If you are a Beatles fan, no, if you are a cartoon fan, you will not want to miss this event.