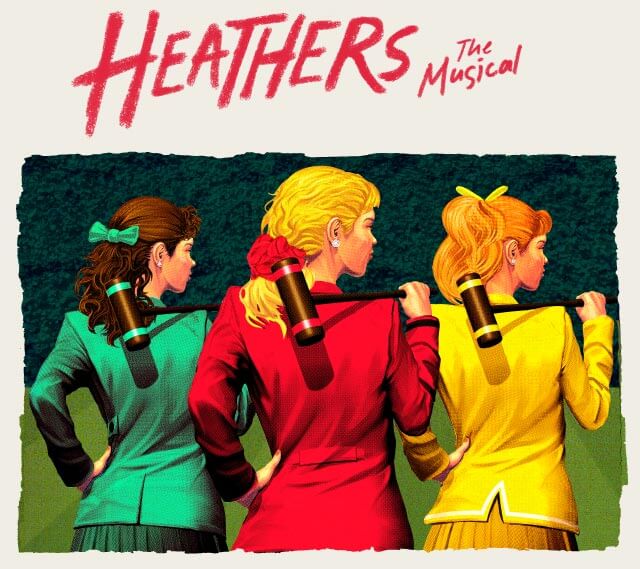 When a cult movie becomes Heathers: the Musical and one managed to not join the cult,

one brings some skepticism to opening night at the Blue Barn Theatre.

I mean, seriously, a musical where a high school kid in a black trench coat starts killing off the snooty clique queen and the jock bullies to rid the world of evil-doers? How good can that be? And what’s it doing at the Barn?

Well, it not only belongs there, but works so well I found myself amazed to be won over by everything from a terrific lead performance by Roni Shelley Perez to the big production numbers from a motley cast of student stereotypes that seemed endlessly entertaining.

Like a dutiful critic, I can usually find something that falls short of expectations to balance out an otherwise rave review. Not this time. Maybe the contrast between my lower expectations and what co-directors Randall T. Stevens and Susan Clement-Toberer so superbly delivered dulled my scrutiny, but I surrendered early to the entire package.

Perhaps the biggest surprise was the impression that the score by Laurence O’Keefe and Kevin Murphy actually served the far-fetched story so well. You might not believe that when I tell you that the audience favorite was probably two oafish dads singing “I love my dead gay son,” but I could recite a long list of highlights.

You came to expect a highlight whenever Ms. Perez as Veronica Sawyer, the spunky teen torn between becoming popular and doing the right thing, sang, or when MacKenzie Zielke as Heather Chandler, the queen bee-yotch, strutted her stuff. But then someone such as Sarah Gibson playing an idealistic teacher led a lively treatment of “Shine a Light” or another Heather (Mallory Vallier) sang a touching lifeboat song.

Sure, it’s all the stuff of tongue-in-cheek sendups, but it still works on a more empathetic level, for example, when Katy Boone as Martha Dunnstock, sings about her “Kindergarten Boyfriend.”

The boy grows into Ram Sweeney (Robby Stone), one of the two crotch-fixated jocks, who mocks her size by calling her “Martha Dumptruck.”

With co-bully Kurt Kelly (Thomas Gjere), Ram takes a beating from J.D., the murderous lad in the black trench coat. And that role gives Andy Aughenbaugh ample room to prove he’s capable of a commanding performance.

Billed in his bio sketch as a singing/songwriting standup comedian, he tackles the dark character successfully, no small feat given the kid’s tendency to kill all who cross his path while professing affection for Veronica.

My praise for the package put together by the co-directors plus music director Doran Schmidt and choreographer Nicol Mason Lazenby shouldn’t be undervalued given the stretching required by a story full of assorted clichés (yes, the bullies were bullied by their bully fathers, who were actually, in their terms “sissies).

In other words, a story stuffed with predictability is so unpredictably well-presented that we’re willing to buy into it all, from Veronica’s status-seeking to throwing herself into bed with J.D. to making peace with Martha and a surviving Heather. And I dare you to resist rooting for the feisty performance by Roni Shelley Perez.

But, when everything works so well, it’s hard to resist mentioning those perfectly awful dads (Nick Albrecht and Joey Galda), another fine Heather (Laura Rohamel) and the costumes by Wesley Pourier and set by Martin Scott Marchitto.

References to “hand jobs” and other teen customs, plus Veronica’s hop in the sack, might suggest some parental guidance.