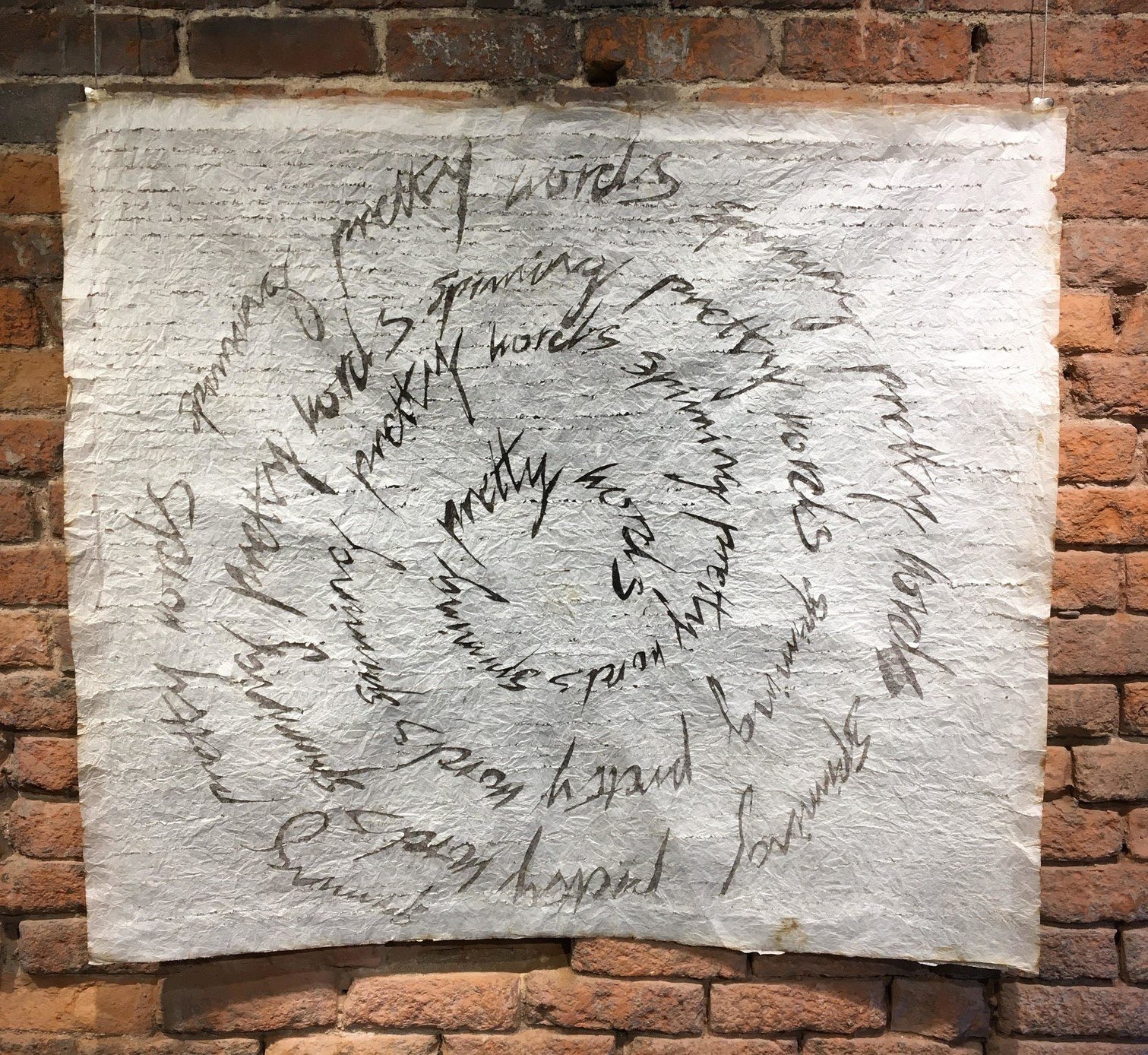 We live in an age of written communication. It spans platforms from the traditional (books, newspapers, magazines) to the techno-modern (email, message boards, blogs, Tweets). Yet, it seems, we have a hard time getting the facts out or our message across.

Is this the fault of language, often confined to particular meaning, convention and usage? Or is it complicated by format, overly fractured to meet character limits or hashtag-ability?

When words fail, we often turn to the visual: Emojis, GIFs and Pinterest. Artist Camille Hawbaker begins with the proposition of personal expression through the written word and, finding it wanting, transforms it physically in her delicate and ephemeral works of paper and fiber, now on view in the exhibition Love Is a Rippling Circle at the Nebraska Arts Council’s Fred Simon Gallery until December 29.

In her artist statement, Hawbaker describes her avid journaling as an endeavor to “convey desires, pain, observations and reflections.” When that process proves inadequate, she begins drawing, adding to her pages spooling organic meanders.

Hawbaker’s urge to create a new fabric of meaning translates into the work on view in the gallery, a satisfying compendium of several approaches she takes to art making. The written word is the starting point of many, but rather than put pen to paper, Hawbaker scribes in a flammable liquid then sets her message to self-destruct.

In large works such as “Confession”, an eddying spiral contains the repeated, incised phrase “spinning pretty words”. This motif floats against a background of nearly dissolved, essentially illegible writing, also stencil cut into the white crumpled paper of her support by fire. Hawbaker creates both contrast and context by adding a layer of dark fibers behind the text, as it highlights the literal rupture in the structure of language she intends to visualize.

“Shard X”, the largest among several works from this series, illustrates most directly Hawbaker’s process of destruction and re-creation. This long, narrow work of paper, ash and thread contains traces of writing amid burnt scraps of paper, which have been carefully affixed to the white paper backing. 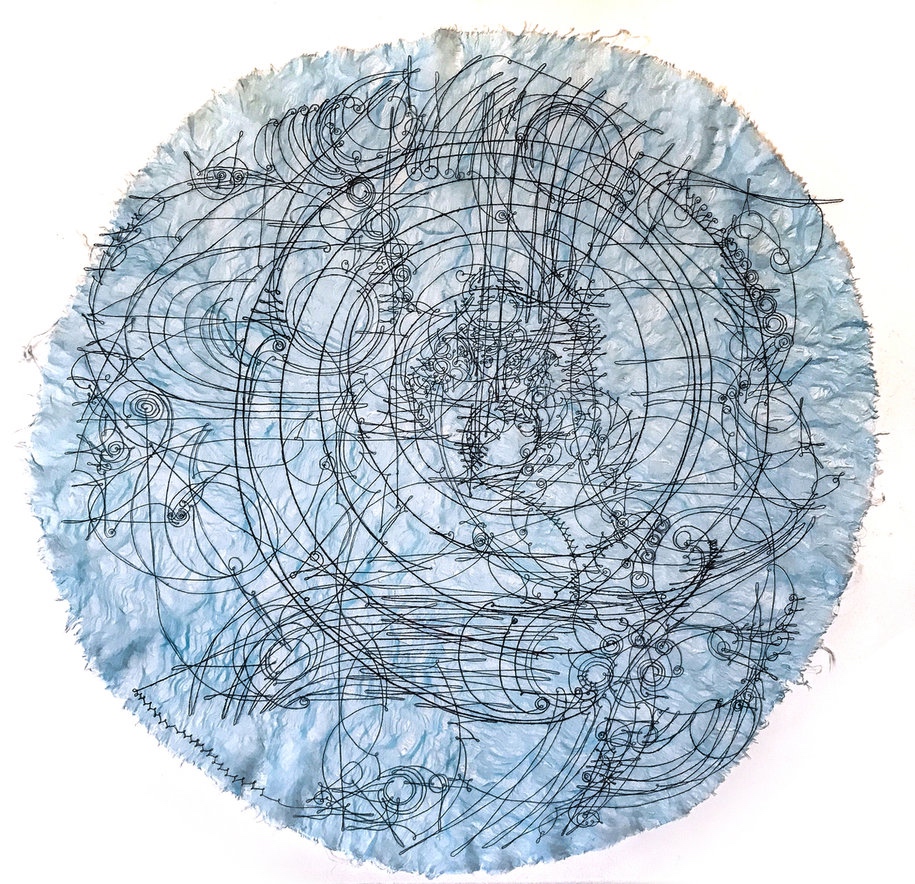 With its scroll-like format and fragmented text, “Shard X” clearly references ancient parchment and papyrus manuscripts, such as the Dead Sea Scrolls. It functions as a kind of symbol for the decay of communication we feel in trying to connect with the past and, honestly, even understand the present. It even serves as a kind of metaphor for the struggle to decipher or decode some contemporary art, an effort hopefully met with reward when works come alive with personal association.

The more diminutive works from the “Shard” series, containing small charred fragments, carry a surprising weight of loss. They seem especially ephemeral, like random message notes or stray reminders; they represent some of life’s flotsam and jetsam.

Several works in the show are described best by Hawbaker as thread drawings. The aptly named “Galaxy” is a centrifugal exposition of spirals and arabesques executed in black and brown thread on a circular field of light blue gauze. It is delicate and intricate, and seems to suggest everything from orbital maps to electronic circuit paths. At the same time, it relishes its relationship to a culturally broad history of textiles and ornament, what the artist calls a “tactile vocabulary with decorative forms and organic motifs.”

“Constellation” takes the celestial metaphor further, providing the artist’s analog to a star map. Also circular, it combines fibrous layers of midnight blue gauze with small patches of varied curlicues etched onto silk. These designs are small linear exercises that, with the help of the artwork’s title, seem to the view to stand in for cosmic formations or zodiac symbols. 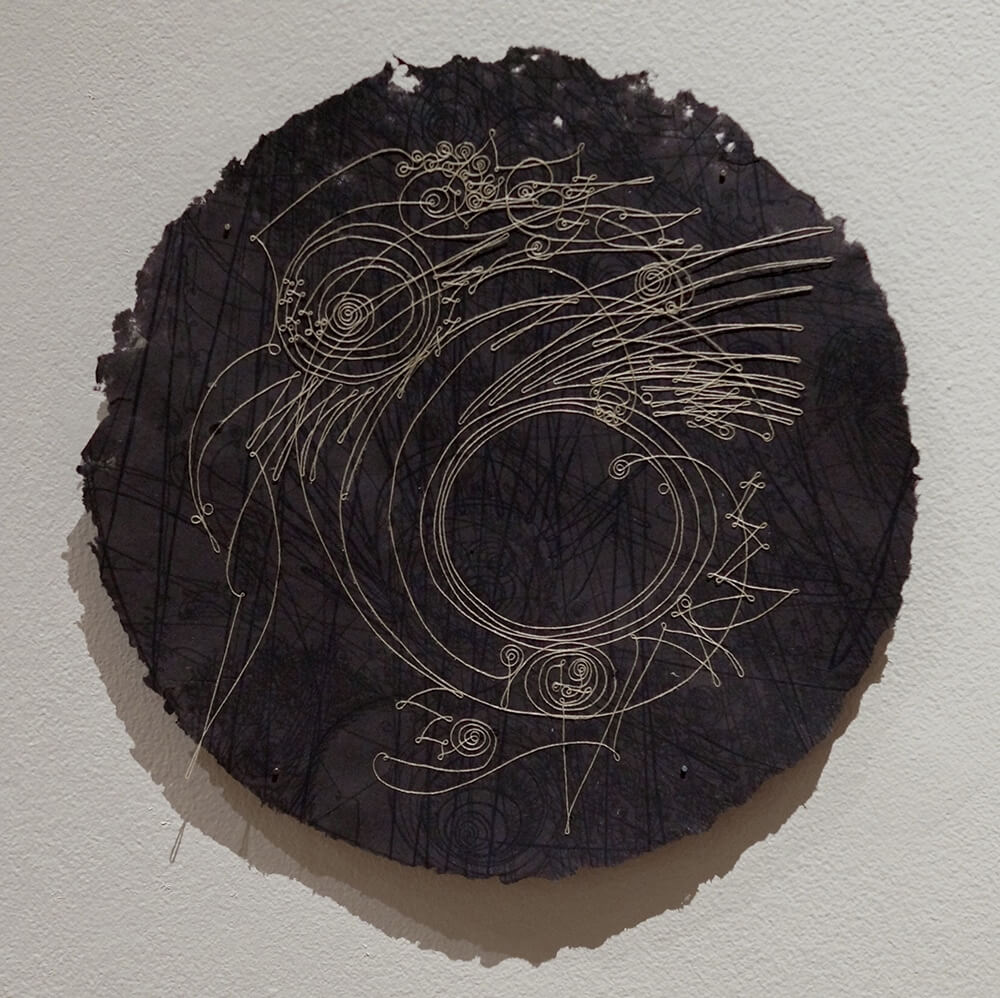 Along a similar line are the round etchings on silk with thread from Hawbaker’s “Breviary” series. By definition, a breviary is a book compiling liturgical texts including Psalms, Scripture, lessons, hymns and prayers. “Vespers,” “Compline” and “Sext” are three of the canonical hours—certain times of day for devotion and prayer.

For the art historically inclined among us, these prints are in part reflections on the exquisite illustrated medieval Books of Hours that were prized by the wealthy laity. For this writer, Hawbaker’s use of black-on-black etching enhanced by a filigree lacework of gold thread calls to mind the ornate, intertwined designs in the margins of these petite illuminated masterpieces.

In the end, Hawbaker’s work occupies a rather refined niche. It is often text-based conceptual work, but it deliberately obscures. It is drawing, but uses thread. It employs a craft vocabulary from design, textile work, embroidery, scrollwork, calligraphy, and the like, and applies it to contemporary art. When the words fail, Hawbaker has plenty of fuel to ignite her creative spark.

Camille Hawbaker: ‘Love is a Rippling Circle’ continues at the Fred Simon Gallery through December 29, 2017. This Nebraska Arts Council gallery is located on the lower level of the Burlington Building, 1004 Farnam Street and is open Mon-Fri from 8am-5pm.