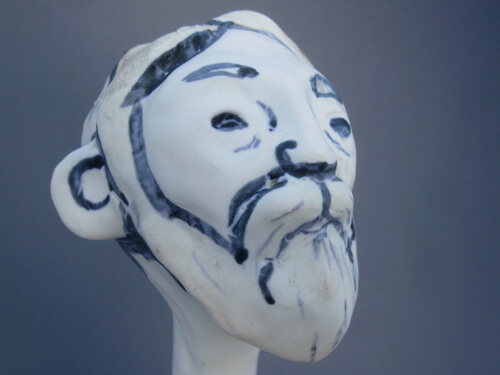 While it’s not uncommon for an arts venue to morph into an arts and crafts holiday bazaar in December, RNG Gallery in Council Bluff has attempted to raise the bar if not exactly expectations.

If you see RNG’s current offering, Crush, seeking a typically edgy exhibit, given the gallery’s rep and the promising show title, you might come away a little bewildered despite being entertained and pleased with your purchase.

Crush features new work from three artists, Amy Morin Quinn, husband Rob Quinn and Nolan Tredway, all of whom have successfully shown in the area for nearly a decade. Amy offers a variety of animal and whimsy-motivated fabric art and design, Rob a series of fantasy inspired paintings and ceramic sculpture and Tredway, painted portraits and dreamscapes of children and creatures that coexist “where the wild things are.”

You might be crushed by the sheer number of pieces on display and sale; a rough count puts it at over 100 with dozens sold as of last week just in time for holiday gifting, and that is just fine with RNG owner and artist Rob Gilmer.

“The Grimm’s and Coen’s could not have thought up this lot,” Gilmer said in his show statement. “Many of these monsters, animals and things make great holiday gifts for yourself or others. With the wide use of materials: fabric to clay, paint to faux fur and wood to wire, these three artists tap into the minds of the inner child we lost months ago, or was it years for some of us?”

What Amy, Rob and Nolan haven’t lost as well is their mutual crush on each other’s art. Hence the title according to Amy who also hinted on her website, plaiderpillar.com, “a more sinister reason” for it which unfortunately didn’t happen thus possibly affecting the show’s cohesion and edginess.

That said, all three artists do explore “that inner child” with their own style, tone and point of view sometimes overlapping in imagery. Overall, Crush is marked by degrees of whimsy, fantasy and the surreal. There is an element of each in all, but Amy’s fabric art is both familiar and whimsical, Rob and Nolan create more fantastic figures, only the latter’s are darker, grimmer and forbidding in their narratives.

If there is an overlying theme to this menagerie of the grim and grimmer, Nolan may have given it up with what he said recently that motivates his art.

“I’ve been interested in the word and the idea of ‘disarming’,” he said. “It has both all and none of the characteristics of power, that is, the power to disarm (regarding) how we interact with each other and the world.”

Crush certainly is a disarming show as it appears in varying degrees to reconnect with a more innocent, open and imaginative period in our lives. To let go a particular bias, to let down our guard or just simply accept something or someone out of the ordinary. In short, to lose oneself in the show and open up to an alternative way of thinking and feeling. That may be overstating the case, but this show has that potential, even if it’s more a feeling than a concept.

Amy’s contribution is the most accessible here as her rabbits, Teardrop Birds, cats and Cat Blocks require little more than a smile and admiration for their playfulness and craftsmanship. But then there is that matter of “Robespierre,” a giant inflated black squirrel, designed by Amy and created from her pattern by Signs and Shapes Group. It’s an imposing piece, but as a commission which has made its appearance here before, it seems out of place now as it overwhelms its space and fellow creatures.

Making more of a fitting impression are such signature pieces as her larger-than life, doll-like stuffed animals with their cheerful color schemes, plaids and patterns. Works such as “The Rose Rabbit of Inle and its smaller sibling, “The Golden Rabbit.” But even more impressive is the puppet-looking, articulated “Magnus the Rabbit Marionette” that boasts greater detail and complexity. Also noteworthy are her two stuffed and fabricated “Loni and Linni,” giant cats, two teens just lounging and looking like they owned the joint.

Rob Quinn’s best work here is his series of small ceramic figures, mostly human, some animals and a few in mutant mode. These are mostly graceful with a surface patina and glaze that resembles blue-veined marble or porcelain. Virtually all figures feature wistful expressions with an upturned gaze at something special.

Originally, that “something special” was the Quinn’s wedding procession and ceremony last fall as each ceramic bore witness to the event. Each one appears with its own emotional POV. “Seated Peasant 6” looks puzzled and perplexed while number 3 looks on with joy. “SP 7” seems to say, “It was meant to be” while SP 11 isn’t as sure and seems disappointed.

But Rob’s most effective pieces here are “Ceramic Swan Woman” and perhaps her nemesis, “Ceramic Death,” beautifully rendered and detailed and deserving of their own fairy tale or myth. Less impressive are his two larger “Fox Pot” and “Cat Pot” that lack some of that same detail and sophistication.

Sometimes size is a detriment when it overwhelms its concept and space as well as its hoped for sense of magic. Work like this intrudes rather than intrigues. Rob is best, at least in Crush, when he scales down. The same is true of his large set of squarish acrylic portraits of animal and human figures. With their big eyes and bugged out expressions, the images such as “Pollination 1 and 4” look overblown and derivative.

Tredway’s part in Crush is darkly familiar to anyone who has seen this prolific artist this year most especially his inspired fall show at New BLK, Lost Ends, which contributed two paintings here, “Algebra” and the timely “And That’s When We Knew WE Made a Terrible Mistake.” These two pieces have such depth of perception their narratives seem almost out of place in a show that is predominately lighter in tone.

In “Algebra” two children gaze at a dove they apparently released from an elk/deer they just killed. It’s a disturbing image wherein Tredway seems to make the case that art, science and nature are not mutually exclusive in any culture. “…Terrible Mistake” continues this theme with its scenario of the great plains bubbling up crude to the dismay of laborers thus commenting on a recently approved oil pipeline now certain to make its way underground across Nebraska.

Nolan lightens up with two series of smaller works, both very popular: a set of curios called “Cigar Box Creatures” which are a hoot and another set of small oils featuring more of his forest dwellers such as the disarming and furry “Sustained,” the more forbidding “Vlad the Destroyer” an industrial strengthened, vulcanized four-armed lobster and “Richard,” a darkly menacing rabbit from hell.

Tredway has a wonderfully warped sense of delight and humor shared by his audience that helps to measure this otherwise Christmas Crush and “Happy Holidaze.”