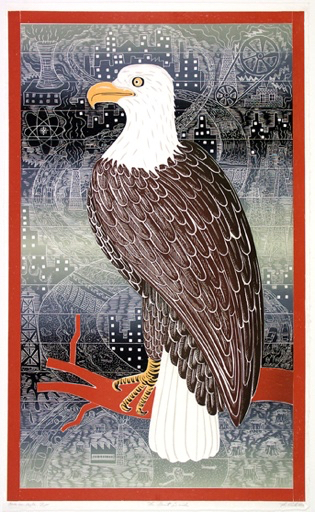 If it’s true that a picture is worth a thousand words, than so too is any work of art. As a great interpreter of history and humanity, relying as it does on a combination of symbols, icons and codes, art “speaks” a universal language.

As a craftsman, artist John Buck uses wood to create large, intricate wood block prints and carved sculpture as well as a blend of the two—carvings in a shadowbox format. This mix of media adds another layer of dialogue. The very use of wood, in a way, harkens to an earthy, organic process by which meaning and history is shared and “whittled” down.

When approaching each of the prints, you are confronted with a large, highly colored main object in the forefront. Whether the American eagle or a jar with a sprouting potato, the image serves as the headline to the scenario you’re about to “read.”

Behind the large image, a series of smaller, contoured objects thwart your initial encounter with the piece. The noble eagle in “American Eagle/The Great Divide” is now back-dropped by the evolution of industry, science and growth.

Your association with the American eagle is complicated by the reminders of what else that symbol represents. The atom in the corner conjures up as much loaded subtext as the bird in the foreground.

What is emphasized in Buck’s work is not necessarily that symbols add meaning but that we tie meanings together in a wholly personal and affected way. We each latch on to symbols differently—through different prompts and with varying amounts of passion and prejudice resulting at times in miscommunication and misunderstanding. 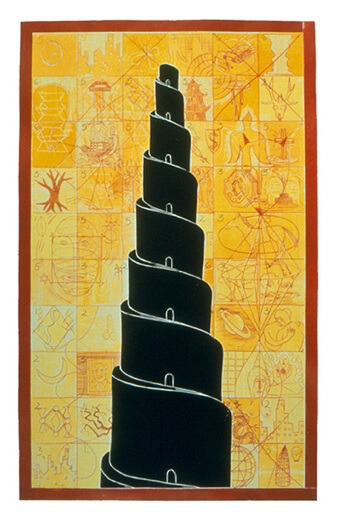 “The Language of the Times” stands out in its suggestion of this building of narrative and breakdown of communication. Based on the biblical story, “The Tower of Babel,’ people struggle to communicate despite speaking different languages, always an impediment to understanding.

The tower itself stands prominent in the print, taking up the majority of space. It is also a flat black with little contouring, allowing for multiple interpretation or none at all.

Behind the tower is a grid of a variety of symbols, graphics and figures that we might easily recognize or create associations with. The images, though, are simple enough for the viewer to form attachments in different ways—evoking a narrative with conflicting interpretations.

But by viewing the small images and the large tower together, we push ourselves to connect the pieces and understand universal meanings despite our differences. In many ways, “The Language of the Times” illustrates the struggle of an artist to develop a common visual language that allows every viewer to connect. Often, the caveat is making work that is reductive or overly symbolic; but Buck recognizes this ideal is impossible and instead makes his audience work to connect the dots.

The exhibit serves as a companion to KANEKO’s Kinetic that includes a larger collection of Buck’s moveable wood sculptures along with more wood block prints. Viewing both collections offers a look at both two- and three-dimensional version of the artist’s layering of symbols in a connected visual vocabulary. Kinetic is open through October 14 at 1111 Jones Street.