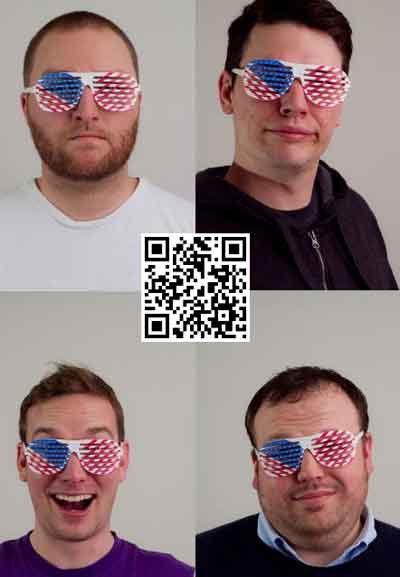 The comedy game in Omaha is a harsh one that requires dedication, offers little accolades and even less financial rewards. That, combined with the difficulty in balancing late weeknights with family and work life has led to the demise of many joint comedy ventures, similar to the way the same pressures have led to the breaking up of some of our favorite local bands. OK Party comprises Nick Allen, Ian Douglas Terry, Mike Perry and Zach Peterson. They formed out of the ashes of local comedy collaborations OKFMDOA and Fancy Party Comedy. With only four members, OK Party has a more defined focus. “Every time I’ve tried to do any kind of sketch comedy in the past, we’d break up before we got through the brainstorming to start writing,” Perry said. “OK Party has already put stuff out … we’re WAY ahead!” “We want to bring Comedy to the forefront of the Omaha entertainment culture,” Peterson said. “Comedy has been marginalized in Omaha for whatever reason and we want to change that by offering quality affordable shows for comedy fans.” OK Party hopes to “create an alternative comedy scene in Omaha that is fun, creative and respected by the community the same way that local independent music is,” Terry said. “I want Omaha to have a comedy ‘scene,'” Perry said. “There are some really funny people here doing really creative stuff. I don’t want to have to go to a bigger city to see a comedian that I like … I want them to want to come to Omaha because they’ve heard how cool it is.” OK Party will host monthly shows at The Waiting Room and aims to release one video a week. The first two are already up on the Funny or Die website. The format of the shows will vary from month to month, with plans in the future for a Twitter-based improv show and a talk-show style show. “There will be a lot of emphasis on ‘events,’ not just shows that are thrown together with the same people doing the same thing, but new ideas that can incorporate almost anything,” Peterson said. “We are completely open to try almost anything.” “It’s different from stand up comedy, you will not be bored,” Terry said. For their first monthly show OK Party is staging a Comedy Battle Royale where 16 of Omaha’s finest square off in a tournament to decide who is the funniest in the land. Contestants come from the city’s comedy and entertainment scenes, and will pair off to tell jokes with audience reaction deciding who advances. OK Party Comedy presents: Battle Royale, 9 p.m. at the Waiting Room, 6212 Maple St. There is no cover. Learn more about OK Party Comedy at okpartycomedy.com. Confirmed Contestants for the Battle Royale: Austin Anderson (from America’s Got Talent and Workaholics) Richard Reese (the Michael Jordan of Omaha comedy) Jimmy Winter (Local business guru, rockdex.com, powerofhoward.com) JC Morgan (former Whitesnake roadie, current Funniest Comedian In LA winner) Kevin Grace (the creepy uncle of comedy) Kyle Fertwagner (from The Beatseekers and The Fonzarellies) Scott Muilenberg (the tallest stand up in the land) Chris Larkin (host of The Sydney Pub Quiz) Will Dougherty (the king of rotund humor) Will Meinen (host of Studio Gallery Comedy Nights, omahatattler.com) Preston Tompkins (nerdly stand up savant) Max Lesley (one wild comedic dude) Ben Semisch (master photographer, master giant) Casey Crawford (Host of KVNO Mav Radio) Tony Collins (former 89.7 River DJ, man about town)