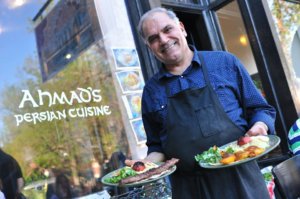 At the end of December 2018, a support beam outside of Ahmad’s Persian Restaurant at 1006 Howard collapsed. The restaurant was inaccessible for months, leaving owners without income, and without a place to share the charm and hospitality they had been bringing to the Old Market for 29 years. After a lengthy renovation, the establishment was allowed to reopen, but months later, the owners are preparing to say see-you-later. Ahmad Nazar has been an integral part of the Old Market’s culture for nearly three decades, and while that tenure will come to an end when January does, don’t count Ahmad out. While we are sad to see the restaurant go, we are excited to see what the gregarious owner has in store for Omaha. Follow Ahmad’s on Facebook to see what Nazar’s got cooking!

In December, building permits were submitted for the construction of Texas De Brazil, which will be located in the Capitol District at 1100 Capitol Ave. Previously, your only chance at a Brazilian Steakhouse experience was a trip to Rodizio in Lincoln. With 70 locations worldwide, this will be the first TDB in Nebraska or Iowa. The churrascaria is famous for their table-side steak-on-a-sword service and all-you-can-eat meat. An opening date has not yet been announced, but The Reader will be following closely. Very. Very. Closely.

Vincenzo’s Ristorante Ready to Get Fired Up

Vincenzo’s Chef Kevin Bartholomew is ready to heat up your mid week with his table-side flambé.  Vincenzo’s volcanic desserts will be available on Wednesday nights starting February 12. If you don’t have your Valentine’s dinner plans, claim your early celebration night now and say it with heat and sweets. Only at 15701 pacific. Call (402) 498-3889 to make your reservation.