Well-known Omaha restauranteur Ron Samuelson had nothing left to prove to the city he’s given so much to. After the heartbreaking M’s Pub fire to ring in the 2016 new year, Samuelson could have retired, having earned impressive accolades throughout a storied career: President of the Omaha Restaurant Association, more than 20 years of delightful Italian at the Old Market’s Vivace, inductee of the Omaha Hospitality Hall of Fame, with thirty-plus years at everyone’s favorite downtown eatery, M’s Pub.

Instead, this patriarch has combined his experience with that of his young and passionate nephews, Aaron and Justin Halbert, to bring us three restaurant concepts in just three years under the umbrella company of SamFam. That number is notable on its own, but is especially startling when you consider that nearly 20 percent of restaurant ventures close within their first year.

With the Reader entering its banner 25th year of publication as Omaha’s alternative news source, we’re focusing on the things that make our little slice of heaven special. So, let’s take a look at the SamFam portfolio, and keep an eye on this family company’s bright future. 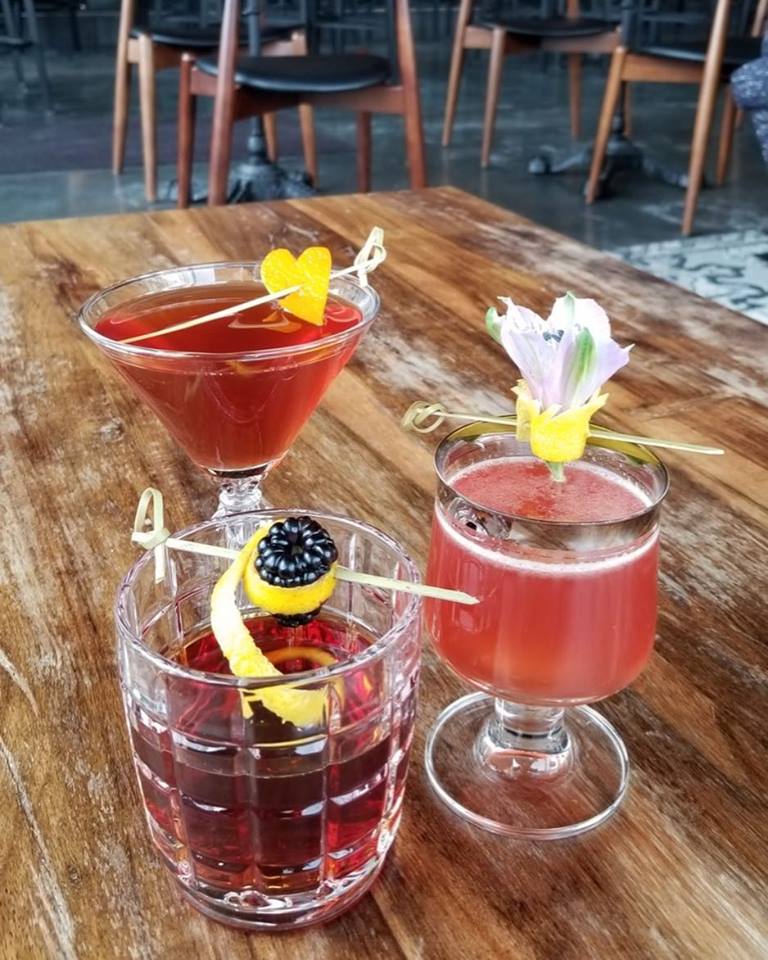 When thinking of America’s great food cities, New Orleans sits at the top or near the top of almost everyone’s list. So it’s only natural that channeling the Cajun Capital has led to success for SamFam. Its Aksarben-area establishment was intended to operate primarily as a watering hole featuring famous Southern cocktails like the Sazerac and Hurricane. In fact, a liqueur that is a Sazerac ingredient, Herbsaint, is the namesake of the concept. Herbe Sainte also features Louisiana brewery Abita with five offerings from that New Orleans-area purveyor.

But Omahans were not only thirsty, but hungry for a slice of the South, and SamFam quickly pivoted to increase dining options, adding lunch service, a popular brunch menu (oh, hey beignet!), and a shrimp and oyster bar. The end result is a tasty trip to the Crescent City, with on-theme craft cocktails and regional delights like peel-and-eat shrimp within a sleek yet cozy-chic space. The best way to sum up this bar and restaurant? With a famous Creole phrase, of course: “Laissez les bon temps rouler,” which roughly translates to “let the good times roll.” 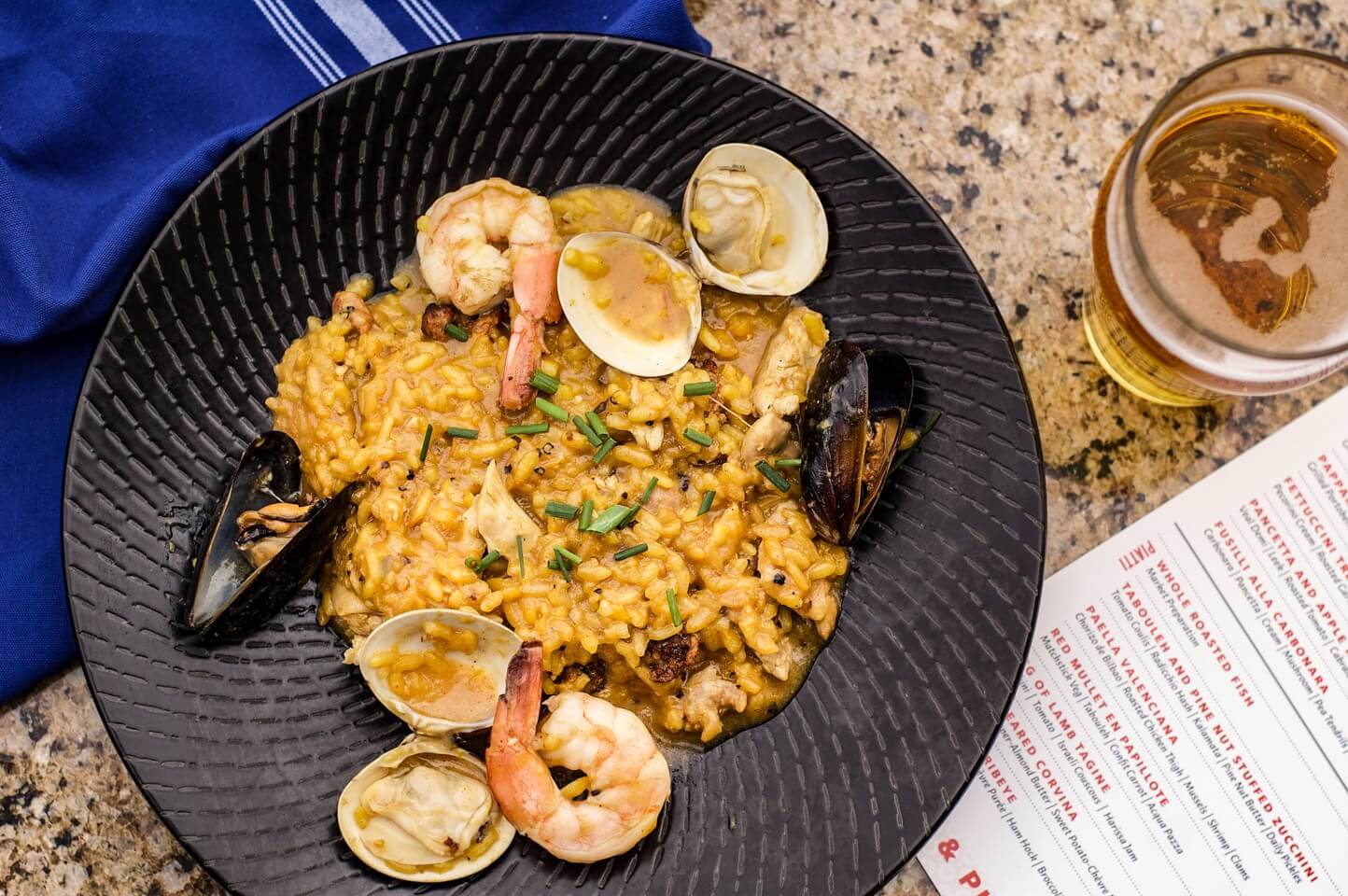 When Midtown Crossing staple Brix closed in controversy, many wondered what could fill one of the anchor spaces of that development after such an abrupt departure. Enter the second SamFam effort, the Coastal Mediterranean cuisine of Della Costa that debuted in May 2017. Meaning “of the coast,” this eatery infuses the sea into every facet. Take the hearty Cacciucco, a rustic seafood stew, or a grilled swordfish wrap. The linguine di Mare features mussels, scallops, and shrimp. Della Costa truly delivers on its premise with each dish. However, an expansive, recently re-focused menu offers plenty of dishes from the land for those who don’t love seafood.

This offering was not without complications, including an oversized rental bay. That often left the restaurant feeling cold and cavernous, against the warm Mediterranean brand the family had worked so hard to achieve. Fortunately, the SamFam team was receptive to pivoting once again. In May 2018, a year after the opening of Della Costa, Cafe Costa was born. This café and bakery occupy the Farnam side of the original space and offer freshly baked goods like croissants and scones with inventive flavor pairings. Cafe Costa also sells homemade sorbet and ice cream that changes daily, as well as a cost-conscious $8 soup and sandwich lunch combo. The coffee is provided by local roaster Hill of Beans, which also operates the Roast coffee house in Aksarben Village and provides the coffee for west Omaha’s Karma Koffee, among others. Consequently, Della Costa + Cafe Costa have got you covered for breakfast, lunch, dinner, happy hour, and dessert.

Debuting in August 2018 was SamFam’s latest concept, the aptly named Mode de Vie inside Regency Mall. Mode de Vie translates to “way of life” from French. Calling a champagne bar a “way of life” is fine by me, a longtime lover of all things bubbly. This new-ish eatery channels Aaron Halbert’s certified sommelier experience into a well-rounded wine list with a focus on effervescence plus classic champagne cocktails. The only issue with this hip and delightful spot is its inclusion of cuisines from areas formerly occupied by France. In a sense, it seems to be glorifying colonialism. Perhaps the elevation of these sometimes-ignored areas of the world elevates them in culinary status, but I would be remiss not to be honest about my thoughts while being careful not to speak for a culture that isn’t mine.

Regardless, Mode de Vie offers eclectic and delicious dishes in each menu category. Appetizers like the cheese plate, a warm Vichyssoise, and a divine French onion sammie, can be easily complimented by all manner of desserts and dazzling drinks. The chain-heavy Regency Mall needed this infusion of locally owned soul, and SamFam certainly delivered.

Call us a bit mushy as we reflect during our anniversary year, but it’s heartwarming to see a family business that enriches Omaha’s culinary scene and strives to move it forward. We can’t wait to see what this team comes up with next, and we congratulate it on successfully expanding our palate horizons in new and exciting ways.