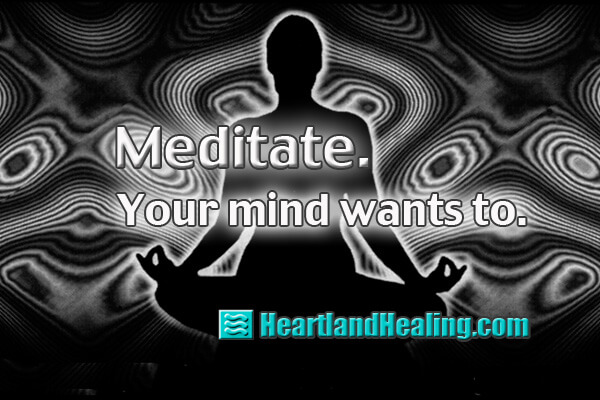 Meditate. Your Mind Wants To

Let’s get something straight right out of the box: You do not have to sit funny in order to meditate. All that is necessary to meditate is to learn it correctly then apply it. Since learning Transcendental Meditation in 1984, I have meditated in airports, hospital waiting rooms, sitting in the stands at soccer games, in the lobby of a busy Manhattan office building, on mountain tops and in quiet, darkened spaces wafting with incense, all with unequivocal success. Meditation doesn’t require special needs. Look, meditation is a natural state of mind that the mind craves. It’s healing. It’s transformative. And it’s easy. All you have to do is learn it correctly.

All About the Bass. You can’t start a tracking session without the bass player and the bass player was late. So I was on my knees in the studio dressing cables and doing busywork as we waited. A bass guitar case plopped on the floor right in front of me. I looked up. I stammered, “You must be the…  bass… player.” The hesitations came because the “bass player” was Paul McCartney.

It was back in my LA days as a recording engineer. During the next 14-plus hours of cutting a track, McCartney’s demeanor impressed me. Accustomed to over-amped and often crazy rock ‘n’ rollers in those days, I will never forget his gentle presence and the restrained command he offered the session. The details of the recording session are unimportant but the impression he made on me as a person remained powerful. A few months later, working on a different record with George Harrison, I observed the same sense of centered-ness and clarity.

Another musician I worked with had a similar demeanor in the studio. Readers wouldn’t recognize his name but he, Harrison and McCartney share a common link. This third musician had an even deeper effect on my life. He was the ultimate catalyst that made me decide I wanted to learn how to meditate.

My Two Cents. Ron Altbach was executive producer of a major live concert album and television broadcast I engineered. It starred the Beach Boys, America, Ringo, Hank Williams, Jr., Julio Iglesias, Three Dog Night and a host of others. It was a complex project and required a lot of technical expertise both on the day of recording and in post-production. Some of the problem-solving techniques of the day included me standing around in the control room with my techie assistants mulling solutions. As we geniuses would banter about which way to proceed, on more than one occasion, from the back of the room came a quiet and unassuming comment, usually along the lines of, “What if you…? Would that work?” The speaker was Ron. And each time he was right.

After two or three of his successful suggestions, I said to him, “Ron, you’re not an engineer or tech. How are you coming up with these solutions? Where’s that coming from? You seem to see things in a clear overview.” His answer was simple: “I think because I meditate, I’m able to assess situations more clearly.”

We talked about the meditation he learned, Transcendental Meditation, and it stuck with me. Three months later I learned TM at the Beverly Hills TM Center on 3rd Street. It took four sessions over 5 days and was easy. It wasn’t free or even cheap to learn. But it may go down as the most valuable thing I ever spent money on. Extrapolated over the 34 years since, it’s worked out to about two cents a day. And it’s becoming a better deal everyday.

Sexy Sadie. Of course McCartney and the other Beatles learned their TM directly from the guru who initiated the training system, Maharishi Mahesh Yogi, during a 1968 visit to the Maharishi’s ashram in Rishikesh, India, Fellow travelers on that trip included Donovan, Mia Farrow, Mike Love of the Beach Boys and other celebrities. Most of the Beatles White Album was written or conceived on that trip.

Midwest Connect. The nexus of TM in the United States is only about 250 miles from Omaha, in Fairfield, Iowa. It is there that the Maharishi founded the Maharishi International University, since re-named Maharishi University of Management. The population of the small town swelled as meditators moved there to take advantage of proximity to TM activities.

It’s also important to remember that TM requires no shift or change in religious or spiritual beliefs. It has no religious connotation at all. Even more, there is a robust database of empirical scientific research documenting the beneficial effects of TM.

The most recent time I saw Paul McCartney, I had to pay for the privilege rather than get paid to record it. As I sat with thousands of others at the arena, I noted that fifty years of Macca doing TM didn’t make him any more punctual. The show started 25 minutes late.