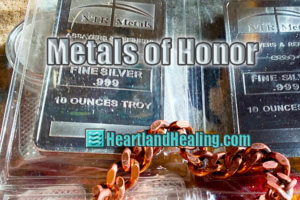 Flesh-eating, antibiotic-resistant bacteria, sepsis, organ failure and death — all scary stuff. In a world where our magic bullets against microbial monsters are turning into blanks, those fears become greater. The Antibiotic Age was a thing. Now it seems it’s over.

Of all the humans who have died throughout history, and I’m talking history as in the millennia that humans have roamed the planet, most have met their demise at the end of a course of infection. Infectious diseases that have become rare and even unheard of have killed most humans over the ages.

With the discovery of antibacterial powers of sulfa drugs and the happy accident that gave us penicillin, it seemed like all our troubles with bacteria were over. Increasingly potent germ killers emerged from the labs and boardrooms of Big Pharma with their properties just beginning to be tapped.

Then, what a goldmine when Big Food and CAFOs discovered that off-label, non-therapeutic use of antibiotics somehow caused livestock to put on weight like nobody’s business. Unfortunately it was somebody’s business and they made billions at it. Now we find ourselves at the end of a soft, cushy amusement park ride called “Freedom from Disease,” waiting to crash into the hard reality of Bacterial Doomsday. What now?

Old is New. As early as 4000 B.C., Egyptians used them as a water purifier and healing powder. Romans used them to stop infection from spreading and to heal battle wounds. When French soldiers brought home the plague of syphilis as booty from Italy in the 1400s, the only successful treatment was with one of them. And in just the past few years, hospitals are realizing once again their germ-killing, antiseptic and healing powers. They are the handful of natural metals that include silver, copper, gold and mercury.

Now, before going any further, it must be said that metals have toxic properties that can harm or kill humans. They can be downright deadly. But so can just about anything. Healing is all about balance and without appropriate medical guidance (far beyond the scope of this column) the scale of healing can be tipped in the wrong direction.

War Lost? Nearly every common bacterium found naturally has shown resistance to the most common antibiotics. We’ve been using the same variation of formulae to vanquish those bugs for nearly 100 years and it looks like, as usual, natural selection and evolution have won. Bacteria have a short lifespan and multiply so quickly that genetic mutations leading to resistance happen almost overnight. That’s how and why we lost the war. Bacteria are proof of the adage, “What doesn’t kill us makes us stronger.” As a species, bacteria got stronger and now withstand antibiotics.

Copper top But studies by modern researchers show that natural weapons against bacteria still work. Tests conducted around the world replaced the touch surfaces in Intensive Care Units of several hospitals with copper metal. Copper kills bacteria, even the worst antibiotic-resistant kind. With copper doorknobs, tray tops, railings and so on, occurrence of patient infection was reduced up to 60 percent. A copper doorknob can save a life. The presence of pathogenic super-bugs on copper surfaces is reduced an astonishing 90 percent! Plain and simple, using copper as a touch surface reduces the chances of spreading infection.

Mercury When French soldiers inoculated Europe with a virulent strain of syphilitic STD back in the 1500s after picking it up on the marches of Italy, it proved nearly as devastating as the bubonic plague. It took decades before the populace realized it was transmitted by intercourse. Of course, that didn’t seem to slow anyone down.

Since there was no known cure at the time, experiments prevailed and eventually it seemed that treatment with mercury, both internally and externally, was efficacious. Problem was, mercury was extremely toxic. Syphilis could kill but so could the cure. Scratch that one off the list.

Silver bullet. Silver has been a medical metal throughout history and unlike mercury, silver has redeeming qualities. On a recent visit to a sick relative in hospital, walking past the nurses station I spied a stack of silver-infused bandages destined for a patient’s room for use as a wound cover. It seems that even modern medicine has retained a place for silver in the healing modalities.

Silver is strongly antibiotic. In the face of the growing threat from bacteria that resist our most powerful antibiotics, silver offers a time-tested treatment. For thousands of years, Chinese medicine, Egyptian, Greek, Ayurvedic and even Japanese methods have used silver to heal wounds, illnesses and serious diseases. Western medicine is just now catching up.

Modern medicos now add silver to wound dressings, use as a standalone medicine and enhance the effect of antibiotics. Silver alone shows promise in killing the deadliest of the resistant forms when antibiotics are of no use. Astonishingly, but not surprisingly, Western science has yet to even figure out the exact mechanism that silver uses to kill the bugs. All they know is that it works.

Each time contemporary medicine finds a “new” plant, herb, metal or method that heals, it’s important for us to remember that those natural, holistic medicines and modalities have been known for thousands of years. Show some respect.

Heartland Healing is a metaphysically based polemic describing alternatives to conventional methods of healing the body, mind and planet. It is provided as information and entertainment, certainly not medical advice. Important to remember and pass on to others: for a weekly dose of Heartland Healing, visit HeartlandHealing.com.
2019.12.31