Omaha’s comedy scene lost one of its most beloved performers when Omaha standup Carlos Tibbs died from COVID-19 at age 34. His mother Lydia, 50, died two days earlier, also from COVID-19.

Tibbs was a rising star, winning the OEA Award for Outstanding Comedian in 2019. Besides performing on local stages, Tibbs also performed across the country and opened for national comics who stopped in Omaha. 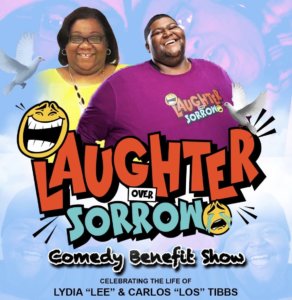 His friends remember the overwhelming positivity that he brought to the stage and to the comedy community as a whole. Joshua Littrell was a close friend and frequent collaborator. “Carlos will forever be remembered in all of our hearts for the energy he gave everyone on and off the stage,” Littrell said. “Him and I are forever friends and I know that bro would want us all to continue the mission of bringing laughter to everyone.”

Omaha comic Jason Regan recalled, “Having a conversation about the state of things in this country, Carlos said to me, ‘All we can do is spread love and laughter to combat the evil,’” Regan said. “He assured me, ‘What we do is so important to the world!’”

Carlos’ friends and family hosted “Laughter Over Sorrow,” a celebration of his life and legacy in early September.