Home » Music » A Return to Form: A Conversation With The Bronx 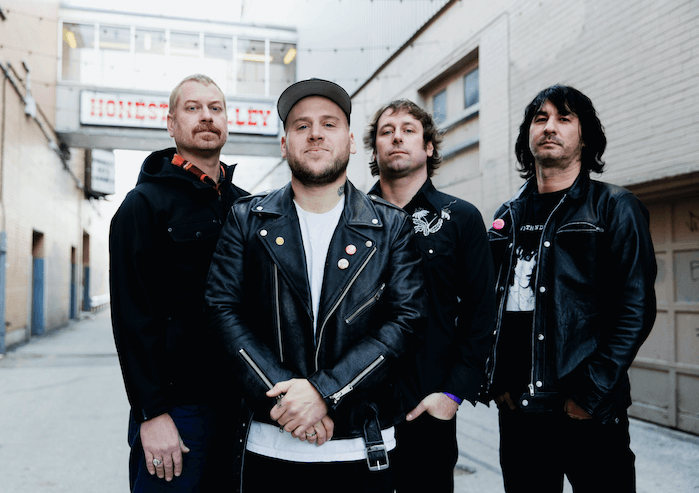 Melting faces and winning hearts with their explosive blend of hardcore punk, rock and a little bit of everything else thrown in for good measure, LA’s Bronx have been going strong since 2002. Their five eponymously-titled releases have often alternated with straight-up Mariachi albums which, at times, featured mariachi versions of Bronx songs. It sounds strange, but it works. Quite well, actually. They’ll be tearing into town Monday, April 9th at the Waiting Room in support of their latest release, Bronx 5 (a non-Mariachi effort).

There have been a few lineup shifts over the years, but vocalist Matt Caughthran and guitarist Joby Ford have been mainstays, a sort of punk Tyler/Perry combination who’ve steered the band into some interesting corners, expanding their sound without sacrificing its core ferocity. Bronx 5 marks the first release without founding drummer Jorma Vik, whose musicality and imaginative fills gave the group a distinct texture. While that could be the death knell or some bands, it wasn’t a fatality for the Bronx, Caughthran said when asked about the songwriting process for this release. David Hidalgo, Jr, who played in Mariachi El Bronx and The Drips, a Bronx side project, as well as stints in Suicidal Tendencies and Social Distortion, has taken up the drum throne.

“It was obviously different,” Caughthran said, “but we’ve known David for a long time. I grew up with him, and we’ve played music together in one way or another for the last 15, 20 years. It was definitely a different feel, but we knew what we wanted to do and we wrote the songs together. Everything felt great. We never hit a creative wall.”

They clearly didn’t. While Bronx 5 is still very much a Bronx album, complete with breakneck beats and unpredictable riffs, it also shows a progression in terms of melody and inventiveness. It’s the songs that feel like they don’t belong that really stand out for Caughthran. “I always look forward to the weird ones. On Bronx 2 it was ‘White Guilt,’ for example.”

On this album, that song is “Two Birds,” which starts out as your standard Bronx song that promptly takes a left turn with a chorus that veers dangerously close to Monkees territory.  Caughthran laughed at the comparison. “’Two Birds’ is probably the most out-there song on this album,” he said. “It takes us to a new place. But that’s what it’s all about, man. At the end of the day it’s fuckin’ music. You’re supposed to be having a good time and doing your best to push the envelope. Sometimes you can take yourself way too seriously or get way too wrapped up in an album. We didn’t approach this album in a very serious manner. This album was a lot of fun for us to make. We had a good time and it came together really smoothly. I think that shows. Every album’s different. Sometimes an album will have one big statement, one collective idea or a single theme. That’s not this record. This is just us having fun.”

(For those who don’t know, Quora (link to www.quora.com) allows users to ask every question imaginable, from “how can I pass a Google interview” and “what’s Tom Cruise like?” to “how can I turn $100 into $1,000,000?” and “do square sugar cookies bake the same as circular sugar cookies?”

Can Toaster Strudels be cooked in an oven?

What is the most British thing ever?

Oh God. There’s so many. Off the top of my dome…bad teeth.

There’s so many! That’s a great question you can spend an entire day on. For now I’ll say Chumbawumba.

What are you reading?

What should I bring on a cross-country trip?

I travel pretty light. I always bring my passport in case things get weird. Always take your passport, even if you’re not leaving the country. If you don’t have a passport, get one. You never know when you might need to skip town.

What’s the greatest scene of debauchery you’ve ever witnessed?

What’s your favorite method of revenge against rude drivers?

Probably throwing shit at them. When I was in high school one of the dumbest things I ever did was throw a large drink at this dude on his bike. We were in a car, I threw it and he totally wiped out. It was a horrible thing to do.

Then the light turned red. And this dude’s up and back on his bike and he’s coming after us like the fuckin’ Terminator. He was so pissed off. My buddy panicked and made a right and the dude on the bike followed us. We ended up in this dead end alleyway and turned around so we had to kind of joust this guy. He was amazing. He punched a window and it cracked.

Have you ever met someone that’s pure evil?

Yes. I’ve encountered pure evil on a couple different occasions. Mostly drug-related (laughs). But unfortunately there are some terrible, terrible people out there.

When I was growing up in Pico Rivera, my neighbor shot his wife and then shot himself in church. In the early days of the Bronx we saw two gang bangers shoot a third one to death. There’s a lot of bad people out there. But you have to know how to navigate around them.

What was the most disturbing thing a seatmate did during a flight?

People asking if they can finish my meal. I’ve had that happen a bunch of times. Yeah. “Are you gonna finish that?” It’s fucking disgusting. I always just say ‘yeah’ even if I don’t. It’s a weird thing to give someone your leftovers on a plane.

Not being able to find shoes in my size.

Have you ever objected at a wedding?

Ooooh! No. I’ve always wanted to, though.

The Bronx with No Parents and No Thanks