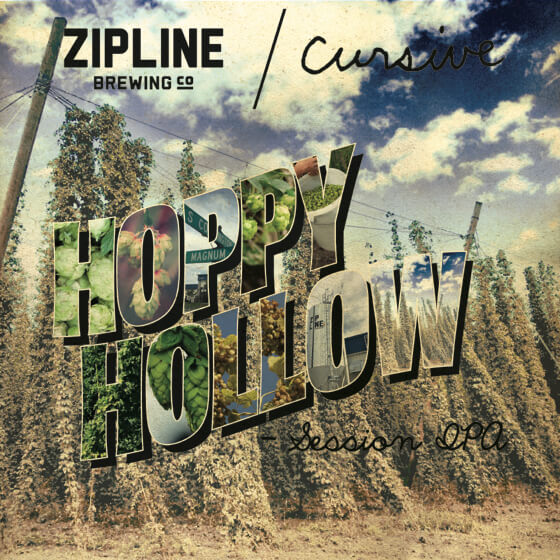 By remixing Cursive’s 2006 Happy Hollow LP into an IPA, the brewers at Zipline Brewing Co. have validated a sentiment that singer-songwriter Tim Kasher first voiced some 13 years ago. Art, as it turns out, is hard.

The Lincoln-based brewery is calling its masterpiece Hoppy Hollow — because a craft beer is only as crafty as its punny name — and plans to release the small-batch session IPA later this month. It’s all part of a greater pun called Beer Nebraska, a festival being organized by both Hear Nebraska and Zipline that aims to foster a collaborative relationship between local breweries and local bands.

“Happy Hollow is such a big, bombastic record in a lot of ways, but it also has its quieter points and more subtle moments and I think that’s a good parallel to a beer like ours,” said Craig Reier, Zipline’s director of marketing and events. “There’s lots and lots right up front when you’re smelling it — there’s horns, there’s hops. But there’s some really nice, subtle flavors, especially for the style.”

Reier, 32, is a certified cicerone, which is, as he likes to put it, “a beer dork who took a test to prove it.” His nose bleeds an expansive beer-tasting vocabulary and his Coke-bottle-lens beer goggles see beauty in hops, grains and strains of yeast. When I caught up with him earlier this month on the outskirts of Lincoln at the Zipline taproom, Reier was amazed how nearly kicked the Hoppy Hollow test keg was in the facility’s yeast lab. It seemed no one at the brewery could get enough of the stuff.

“This is probably the most excited we’ve been over a test batch of beer that we’ve ever done,” he said before pouring me a glass. “It’s exactly what we talked about when we were trying to formulate this idea.”

A domestic-a in the truest sense, Hoppy Hollow bursts and blooms with flavor, starting with a jammy punch of orange, peach and melon and finishing with a hint of bitterness that lingers as begrudgingly as one of Kasher’s scathing lines. It’s an IPA for people who normally don’t drink IPAs, mirroring the accessibility of Cursive’s relatively lighter, less challenging album. The deception is in the beer’s mouth feel. It tastes bigger than its 4.3% ABV might dictate. So it’s easy on the tongue and less taxing on the liver (an already ugly organ before any additives).

“I remember Tim’s one objection — well, not necessarily an objection, but it was kind of funny,” Reier recalled. “He said, ‘That all sounds awesome, but I don’t know what people are going to think about Cursive having a low-alcohol beer.’”

Indeed, between Cursive and The Good Life, Kasher has made a career out of getting drunk and lamenting about being drunk. With The Good Life, his boozing is explicit. With Cursive, it’s more implied, like with the unhappy denizens of his metaphorical town of Happy Hollow, which borrows its name from the well-to-do Omaha neighborhood. In an email, Kasher intimated that Hoppy Hollow isn’t necessarily the bottled version of his conceptual apostasy.

“We [Cursive and Zipline] had discussed what we were mutually interested in beer-wise, and they mentioned this session IPA they had been tinkering with — sounded great,” he wrote. “‘Hoppy’ Hollow seemed like the appropriate play on words to pair the band and brew together. We are honored to be a Neb. band paired up with what I consider to be the best brewery in Neb.”

Reier told the same tale. But as a person who pairs beers with albums for fun, he didn’t shy away from coming up with reasons why drinking Hoppy Hollow while listening to its companion album “makes a whole hell of a lot of sense.” Beer Nebraska festivalgoers will have a similar opportunity Sept. 24 when Cursive, Criteria, Universe Contest, Columbia Vs Challenger and Better Friend take over Zipline’s parking lot.