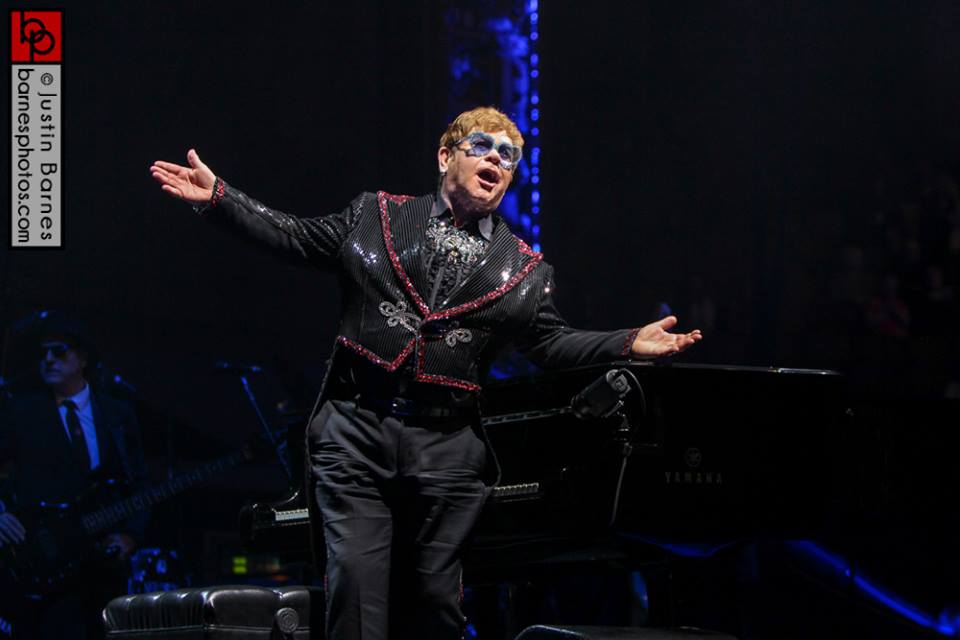 There’s nothing more enjoyable than watching a bunch of old people having fun.

Elton John and his impeccable band were doing just that when they performed an emotional two-and-a-half-hour set at the CHI Health Arena as part of the English singer’s Farewell Yellow Brick Road tour.

It’s strange to say, but John, 71, and the rest of his band may be better than ever. They rolled through a litany of hits and a few oddball cuts over the course of the night, and they didn’t miss a beat while doing so.

John opened the show with a stomping version of “Bennie and the Jets” that immediately jazzed up the still-streaming-in crowd and followed it up with “All the Girls Love Alice,” one of the stranger cuts from Goodbye Yellow Brick Road. The show fluctuated between chart-toppers and deep cuts though there were definitely more of the former.

While the audience lost its collective mind when the opening lines of “Tiny Dancer” echoed through the arena, there was arguably just as big of a response once a conga-heavy version of “Indian Sunset” ended.

In between songs, John discussed what went into the making of that particular tune and why he considered it to be special.

For “Indian Sunset,” he discussed his songwriting partnership with Bernie Taupin, something he touched on frequently throughout the evening. “He would give me the words and they appear as movies in my head… When he gave me the words to this one I thought ‘God, this is a two-and-a-half-hour film.'”

He talked about Aretha Franklin recording one of the duo’s hits (“Bernie”), how “Someone Saved My Life Tonight” was his most personal song and the importance of the work his foundation is doing to fight HIV and AIDS. The whole night had the feel of a retrospective that you might see on PBS or VH1. He also thanked his fans profusely.

“I want to thank you for the love, the loyalty, the generosity and the kindness you’ve shown me all that time. I’ll never forget you,” he said after mentioning all the formats his fans have purchased his music in over the years.

Even with all the chatter, the show was far from a slog. In fact, John and company seemed to grow more energized as the show went on.

Both “Rocket Man” and “Levon” took instrumental detours that stretched them well past their original runtimes. During “The Bitch Is Back,” a video featuring drag queens fighting played on the big screen. The visuals to “Crocodile Rock” featured a number of John’s die-hard fans showing off their favorite merch and memorabilia while the band incited a stadium-wide sing-along. By the time John was ripping through “Saturday Night’s Alright for Fighting” the entire crowd was dancing along as a video of his career highlights played on the big screen.

I’d also be remiss if I didn’t mention the outfits. Oh, dear God, the outfits! He started the show dressed in a lovely sequined morning jacket with tails. Actually, everything had sequins: his jackets were studded with them, his pants piped with them, and his glasses were covered in them. There was a pink and green suit jacket, Gucci glasses, an enormous diamond hoop earring, and an even bigger diamond broach.

The Rocket Man returned for his encore dressed in a cushy pink robe to perform “Your Song” and “Goodbye Yellow Brick Road” as his piano glided across the stage thanks to the help of a motorized platform. He then removed the robe to reveal a tracksuit bearing his name and was carried up to the screen on another platform as an updated image of him on the Yellow Brick Road flashed on the screen.

It may not be the last time we see Sir Elton – this tour does last for another three years – but if it is, it was a worthy send-off for one of pop music great songwriters.