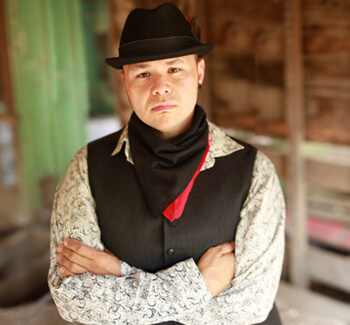 Blues singer-songwriter-guitarist Hector Anchondo has paid the price to live the dream. Calling Omaha home for two decades, he led his Hector Anchondo Band to the 2016 International Blues Challenge finals in Memphis after reaching the semis a year earlier.

In 2017, their Roll the Dice album charted worldwide and the group won Omaha Entertainment and Arts Awards recognition for Best Blues.

After years working odd jobs to supplement his music earnings, Anchondo, 38, now supports his family doing what he loves  He also gives back to the adopted hometown that nurtured him as founder of In the Market for Blues festival. Twenty-eight bands will gig at eight Old Market venues Saturday, August 4. His band hits the stage at midnight at T. Henrey’s Pub. A jam session follows.

Things are golden for Anchondo. He’s getting married, He’s becoming a father a second time. He’s written songs for a new album (his eighth). His tour rides are in a 2016 Ford Transit 350 XLT, not the beaters he used to drive. But he was reminded of the fragility of it all last April when the night before a tour was to commence, severe stomach pains landed him at University Hospital. Surgeons removed his gallbladder.

Once through the health crisis, there were crushing medical care costs for which he had no insurance, Anchondo could see it all slipping away. But the Omaha Blues Society held a fundraiser concert at Chrome Lounge and friends launched a YouCaring campaign. He’s healed now and can pay his bills.

Speaking to The Reader from Aspen, Colorado, where he solo toured last month, Anchondo reflected on the journey that’s taken him from his Missouri Ozark hill country origins to this Great Plains base and beyond.

He took up guitar at 16 while living on his family’s farm. He’d never played an instrument before, though he did sing in choir. It was passion at first lick.

“It was like a flip switched on. I took it very serious from the start. I’ve always been about the craft of it,” he said.

He recalls a guitar solo in a Guns N’ Roses video sealing the deal.

“I was like, That is what I’m going to do, and that’s what I’ve been doing ever since.”

“I always liked the blues. It’s the emotional expression when you’re on stage – the personality part of it. You can really be yourself.”

Carlos Santana was another “big influence.”

“I had an immediate connection through our Hispanic background. His Latin grooves caught me right away and I’ve been hooked ever since.

“Eric Clapton was also a big influence. especially his acoustic MTV unplugged album. I could not stop listening to it. Learning the songs was a complete joy.”

He gigged in Missouri before moving to Omaha, where he had family, to try making it in a bigger market.

“There was a lot of not playing music out live because I was starting from scratch. I didn’t know where to begin.

Then I started hitting every open mic in town. I would go to those every week without fail. I started meeting other musicians. It was a real tight-knit community.”

“It was a lot of fun. It was a very nice, accepting, open atmosphere. I also started my own weekly gig at Caffeine Dreams.”

He slept on couches and floors and worked McDonald’s to get by. On stage, veteran players noticed his talent.

“A lot of older musicians came up to me and told me to never stop – that I had a good thing going, I was very fortunate to have lots of encouragement.”

The natural worked to hone his intuitive gifts.

“Sometimes I would practice the same riff or part for hours upon hours until I got it right.”

His pursuit of mastery attracted other artists and he formed a popular band, Anchondo, with some of them. Live performing gigs beckoned and local stations gave their music airplay, especially “She Devil.”

“We were doing a lot of great touring and getting festivals, playing some auditoriums in the Midwest – but barely making any money. We were living dirt poor. Any money I’ve ever made I’ve always invested back into music.”

He’s spared no expense with guitars. Despite having a Fender Strat and a Dobro Resonator (anonymously left on his doorstep), his go-to is a Delaney Austin.

“It was hand-made special for me. The sound quality, the playability, the jumbo frets, the sustain, I could go on and on. Plus, it feels good to be a Delaney-endorsed artist.”

Things were looking up. Then the recession hit and bookings fizzled.

“it just killed us. We stopped playing. I had to do a lot of soul searching, like, Is this when I hang it up?”

Tired of dishwasher, check-out clerk and construction jobs to make ends meet, he recommitted to his dream.

“I just couldn’t stop being a musician.”

He formed a new band, wrote dozens of songs and released the well-received EPs Kicking Up Dust and Young Guns with blues as his new calling card.

He strategically entered his band in the Nebraska Blues Challenge. After losing the first two years, they won the next two, thus qualifying for the international event down South. He describes that hyped stage in the nation’s blues mecca “a game-changer.”

“It meant getting in front of the blues worlds eye. It was a huge learning experience, too, watching other bands that competed.”

“I knew that was the right move to make,” Anchondo said. “I knew I had to strike while the iron was still hot. It was a complete success. I finally had an album being played all over the world. We got some serious exposure out of that. It was a dream come true and something I’d been working for my entire career.”

Meanwhile. he’s trying to enrichen the area blues scene with the In the Market fest – now in year four.

“Every year it’s grown and this year is going to kick a lot of ass,” he said. “All the bands are outstanding.”

He credits E3 Entertainment and the Blues Society for “doing the majority of the work to make the festival happen.”

He said the Blues Society and its BluesEd program “have really grown the Omaha music scene.” His drummer, Khaugman Winfield, is a BluesEd alum.

“It was absolutely wonderful of them. So many people rallied together and helped out. My mind is still blown by all the love and support.”

“I anticipate continuing to be based out of Omaha and keep going with business as usual. Omaha has been such a great and wonderful springboard for my music career.”

He’s been down this road too long to know that “making it” doesn’t ever mean being home free.

“There’s still lots of struggles and sacrificing, but I have a very full life with my family and getting to play music professionally. It’s my full-time job. I couldn’t ask for anything more.”

“I’m trying to set this next album up to where I have a lot more time to perfect certain things and to invest more in my guitar and my vocals.”