Home » News » COVID-19 Pandemic in Omaha » What is coronavirus?

Coronavirus, or Covid-19 as this novel strain of the common disease that appeared in late 2019 is called, is a flu-like respiratory disease caused by a virus that spreads human to human.

How does it spread?

The virus that causes Covid-19 spreads between people in close contact with each other which is why the CDC has recommended people maintain distances of six feet. 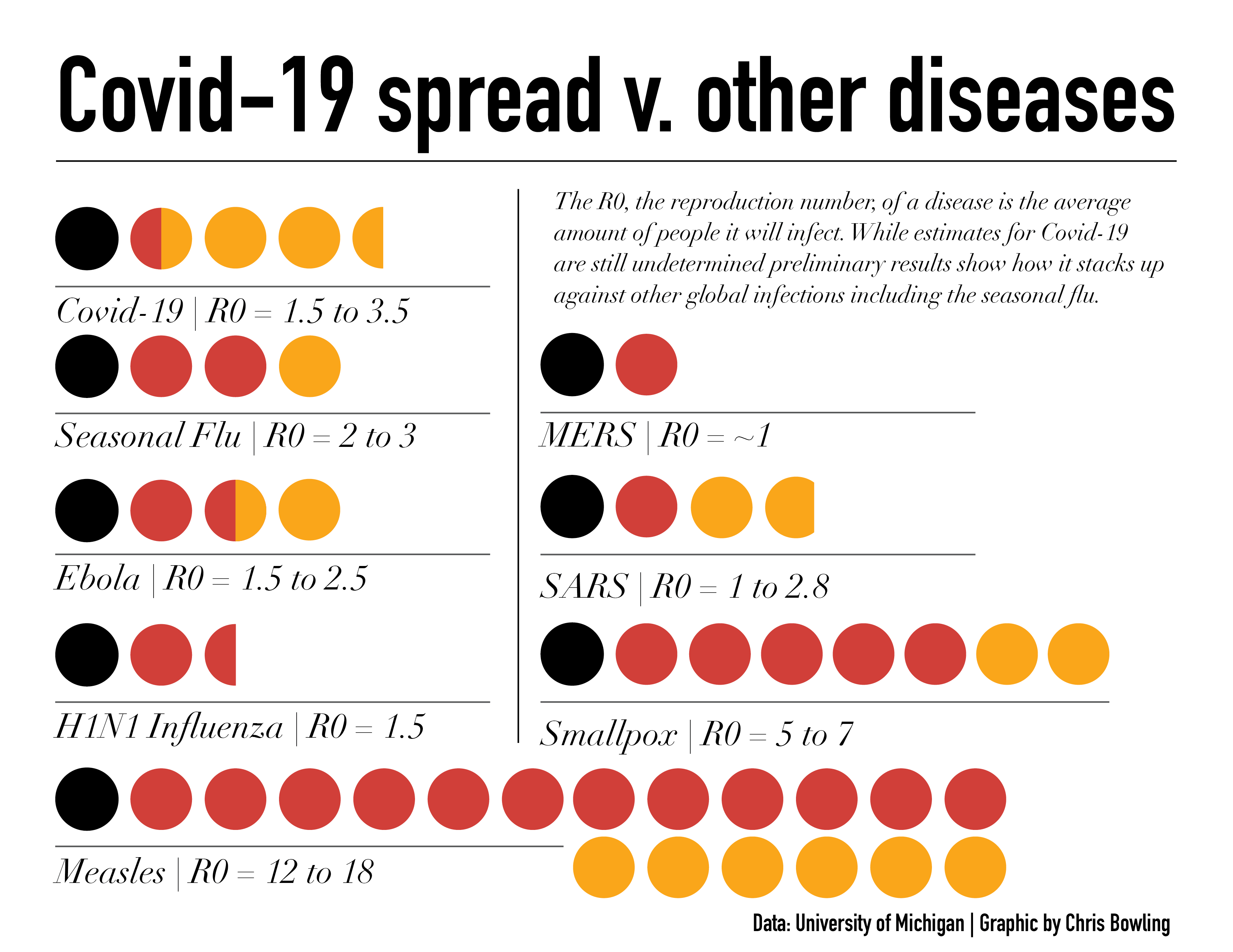 Covid-19 spreads through respiratory droplets produced when a person coughs or sneezes. Inhaling that or touching a surface the virus is on and then touching your mouth, eyes or face are primary ways the virus spreads.

After two to 14 days of exposure, symptoms including fever, a dry cough and shortness of breath may occur.

It’s possible to carry the virus and not display symptoms or have very mild symptoms. However others will require hospitalization and intensive care as well as breathing assistance from a ventilator.

While high-risk demographics were originally thought to be older people and those with existing health conditions that make them prone to illness, new CDC research shows people between 20 and 54 made up 40 percent of the first hospitalized cases in the U.S.

What can I do?

Government and health officials have made recommendations that individuals distance themselves from others, limit gatherings to 10 people and stay inside as much as possible as to prevent spread.

These graphics from the Washington Post show the activity of the disease without these measures.

What does “flatten the curve” mean?

The more stringent measures we take the more we “flatten the curve,” meaning we limit how quickly the disease will spread. This is essential because not only does it lessen the disease’s impact, but also, and most importantly, it lessens the strain put on hospitals, clinics and healthcare providers.

Unlike supplies of sanitizing materials and face masks or even hospital beds to an extent, increasing the healthcare workforce is near impossible. So, as case loads increase dramatically to the point hospitals lack the necessary equipment (respirators, hospital beds, ect.), doctors and nurses have to make hard decisions about who they can help and who they can’t.

And the best way to “flatten the curve” is to follow orders to: keep groups under 10 people; washing your hands often and thoroughly; distancing yourself from others; staying inside if you feel sick; and only leaving home in general for essentials.

Yes, but we’ve never seen a strain like Covid-19 before. By some estimates it spreads faster, it has a higher death rate—killing 3.5% of infected people versus 0.1% for the flu, according to the CDC.

In short, this disease in new and has infected a smaller amount of people so far but it’s spread quickly, has a higher death rate (as far as we know) and there’s just so much we don’t know.

How bad can this get?

The short answer is no one really knows. An early CDC report said in a worst case scenario, meaning no social distancing or crowd control, between 160 and 214 million could be infected. That’s between half and 65 percent of the United States population.

That was before cities, states and the federal government took serious action to stop the disease’s spread and the CDC has since said we’re unlikely to reach those numbers. However it is clear Covid-19 will be a concern through April possibly into May and June.

One projection model however puts the peak for the United States at mid-April and for Nebraska at April 30. At both of those peaks, state and national healthcare would likely be overwhelmed, pushing the limits of supply capacities, according to the the study from the University of Washington and its Institute for Health Metrics and Evaluation.

The effect on the economy

Since March 4, Wall Street has seen a series of historic downward plunges that have triggered halts and some hysteria. Financial stability has somewhat returned amid Congressional efforts to help every American from struggling families to major corporations.

The Federal Reserve dropped interests rates to nearly zero. The federal government is spending a lot of money very quickly to put money in citizens hands, support small businesses and prop up healthcare. Meanwhile airlines say they’re experiencing their worst drops in business since 9/11 and some states have seen spikes in unemployment benefit applications.

In Omaha, the loss of the College World Series and Berkshire Hathaway Shareholders meeting alone will likely result in tens of millions in irreparable harm. That’s to say nothing about businesses closing, people losing their jobs and many other smaller events being canceled or postponed.