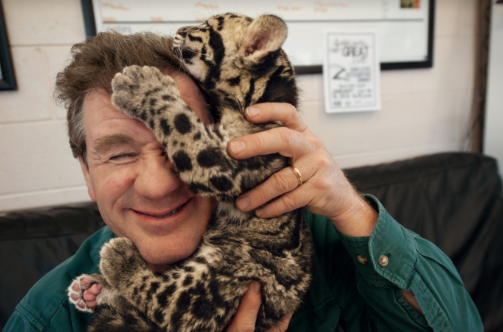 If Noah had a camera, perhaps he would have done what noted nature and wildlife photographer Joel Sartore is doing. Sartore, who resides in Lincoln, Neb., is a star National Geographic shooter in the midst of an epic project, aptly named Photo Ark, that’s creating an archive of global biodiversity in order to raise awareness and spur acton around endangered habitats and species. The National Geographic Society is throwing its considerable weight behind the effort.

The endeavor transcends geo-political differences to put a face on stressed ecosystems and inhabitants.

Photo Ark grew out of Sartore’s early assignments around the world documenting wildlife.

In addition to National Geographic magazine, he’s shot for Audubon, Life and book projects. His work’s been the subject of national broadcasts. He’s a regular contributor on CBS Sunday Morning.

The more he saw and learned, the more species and habitats that became threatened, the more urgency he felt to create a comprehensive archive in his lifetime.

“I’ve been a National Geographic photographer for more than 27 years, and I photographed the first 15 years or so out in the wild doing different conservation stories, on wolves, on grizzly bears, on koalas, all in the wild,” he said. “Can I say that moved the needle enough to stop the extinction crisis? No, it did not. So I just figured maybe very simple portraits lit exquisitely so you can see the beauty and the color, looking animals directly in the eye with no distractions, would be the way to do it. 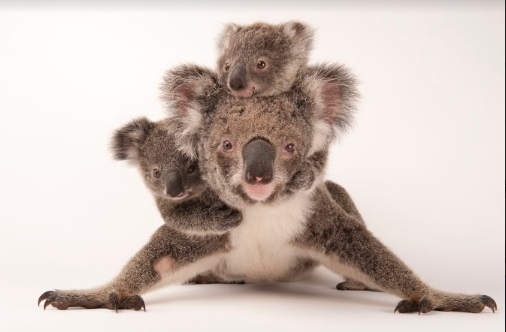 “NG sees themselves as not only responsible stewards of the environment, but they’re in it for the long haul. I always believed that, if I could build the project up a bit, they would see the value in it. And they sure have.  Sadly, I have seen species go extinct since starting the Photo Ark. A rabbit, a fish, an insect and the Rabbs’ fringe-limbed treefrog have all gone extinct since I photographed them. It saddens me greatly, but also angers and inspires me to want to give everything I’ve got to this project, and use extinction as a wake up call. As these species go away, so could we.”

Traveling to where species are, often to remote areas, accounts for much of his time on the project.Ironically, the Photo Ark practically began in his own backyard about 12 years ago.

“The Photo Ark started when my wife got breast cancer. That event ‘grounded’ me for a year in that I literally needed to stay home and take care of my wife and kids while she got chemo and radiation. She’s fine now, and on the days that she felt better, I started going to the Lincoln Children’s Zoo, a mile from my house, to take photos. The naked mole rat at the Lincoln Children’s Zoo was the first animal to come on board the Ark.

“Since then, I have visited 40 countries and worked in more than 250 zoos, aquariums and animal rescue centers around the world to create the Photo Ark. Most of the countries I’ve visited for this project are those I’d not visited before.”

“We are a little more than halfway done after 12 years with just over 7,500 species (photographed). Because we’ll now have to travel farther and wider to get the remaining species (an estimated 5,000 more), it’ll take us another 15 years to complete. So, if I had to guess, I’d say another 30 countries or so should do it.”

When working in the wild, things can get hairy.

“Now that I’m working mainly at zoos, the work has fewer unpleasant surprises. During my 16 years on assignment in the field for National Geographic magazine, however, I had a few close calls with critters. But it’s mostly the little things I’m most wary of.”

For example, there are diseases carried by insects like the Marburg virus.

“I was quarantined three weeks for that one and didn’t get it.”

“I did get that one and the treatment is no fun at all.”

“These days, working in controlled environments. most of these shoots go extremely smoothly because the animals have been around people all their lives,” he said. “But sometimes the critters do ‘have their way’ with my backgrounds and sets.

“Having enough time to get to everything is the biggest challenge, but definitely doable. Thankfully, the project isn’t political and so we’re welcomed pretty much everywhere we go.”

The work holds deep personal meaning for him.

“Most animals I photograph have a real impact on me. They’re all like children to me because I’m the only voice most will ever have. It’s giving a voice to the voiceless. For many of these species, especially the small ones that live in the soil or in little streams or high up in the treetops, this will be their only chance to be heard before they go extinct. That’s a great honor, and a great responsibility, and why I’m devoting my life to this. “If I had to choose one right now though, I suppose it would be Nabire, one of the last northern white rhinos at the Dvur Kralove Zoo in the Czech Republic. She was the sweetest and passed away less than two weeks after our visit of complications brought on by old age. Now the world just has three left, all in a single pen in Kenya.”

Sartore, a University of Nebraska-Lincoln journalism graduate, is now working exclusively on the Photo Ark. He’s the project’s lone photographer though it’s evolved into a family and legacy adventure.

“My oldest child, Cole, goes with me to assist on most foreign shoots and has promised to carry out the work should I not be able to complete it in my lifetime,” Sartore said.

Photo Ark strives to make a difference. One way is by raising money to save species from extinction. “In the bigger picture,” Sartore said, “we raise public awareness to the extinction crisis.” The message gets out via projections on touchstone buildings (St. Peter’s Basilica, the Empire State Building), publication in NG magazine and posts on NG social media. “The images get people to care about some of the least known animals on the planet while there’s still time to save them.”

Nat Geo Photo Ark EDGE Fellowship is a new initiative aimed at supporting future conservation leaders working on the planet’s most unique and endangered species. In partnership with the Zoological Society of London’s EDGE of Existence program, the fellowship will support funding and highlight creatures in the Photo Ark that historically receive little or no conservation attention.

Sartore doesn’t mince words when describing what’s at stake with endangered biodiversity and the consequences of inaction.

“We’re looking at a massive extinction event if we don’t control human behavior in a way that spares some of the largest rain forests, prairies, coastal marshes, coral reefs, et cetera. But if we can raise public awareness, and get people to care, it’s my hope there will be far fewer extinctions than predicted. It is not too late to turn this around.

“At its heart, the Photo Ark is meant to be more than just a huge archive; it’s meant to inspire the public to care about the future of all life on Earth, including our own. After all, when we save other species, we’re actually saving ourselves.”

In his travels, he encounters just enough positive developments to encourage him.

“I meet people every month who have saved species simply because they cared enough to devote time to it. That inspires me greatly and gives me plenty of hope to carry on.”

To those who pooh-pooh global warming and the damage done by ever encroaching human contact with the wild, he offers some food for thought.

“People don’t think this issue affects them, but it will in a major way in the not too distant future. Climate change, overfishing of the seas, habitat loss, clean air, clean water, good food to eat – these things are all tied together. When we save these other species, we’re actually saving ourselves. It’s my hope, my prayer, that the public wakes up, and soon. There’s still time to save the Earth, but we must act now.

“There are a million things we each can do: Insulate your home and drive a smaller car to reduce your carbon footprint. Eat less meat or no meat. Put zero, and I mean zero, chemicals on your lawn. And just how do you spend your money? Every time you break out your purse or your wallet, you’re saying to a retailer, ‘I approve of this, please do it again’. Is your money helping to tear down the world or to save it? Yes, it requires a bit of education to know right from wrong in terms of your consumer choices, but it’s so important.”

In 2019, the Lincoln Children’s Zoo will incorporate a Photo Ark show into its new exhibit space.

Even three decades into his high profile career, Sartore still has to pinch himself that it’s real, especially the part about his modern-day Noah’s ark gig.

“I still can’t believe a kid from Nebraska who dreamed of working for National Geographic is doing just that. I’m a lucky guy, to say the least.”

For more about the project, visit natgeophotoark.org. Read more of Leo Adam Biga’s work at leoadambiga.com.