Home » News » From Moment to Movement 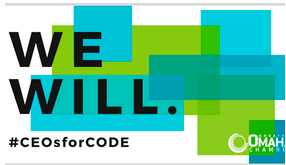 The Greater Omaha Chamber, with CEOs active in their program Commitment to Opportunity, Diversity and Equity (CODE), recently released a series of statements following the death of George Floyd.

The first on June 1 said Floyd’s death represented “long-standing inequities and division that exist both nationally and locally in our society.” The Chamber then went on to provide its vision about the increased importance of economic inclusion and diversity as measures of progress and success for the Omaha community as a whole.

As protests and rallies continued across Omaha, on June 11 the Chamber released “We Will”; a promise from over 150 business leaders to stand against racism, as well as promote substantive change through a series of actions. One promise reads “We will educate ourselves and disseminate the history of systemic racism in Omaha and the barriers it continues to present today.“

The idea for CODE started in 2015, after a study found that African American young professionals were 5-6 times less likely to recommend Omaha to their peers. A follow-up, along with a 67-page report, was evaluated by a recommendations committee which found overlying themes around workplace diversity/inclusion and community diversity/inclusion. Bianca Harley, the Director of Community Diversity and Inclusion, was hired and CODE subsequently began with an employer coalition to improve company culture within the Omaha area. Another program, REACH, was founded within the Chamber as a way of providing access for all people the resources they need to be successful.

Things begun to catalyze in the wake of current events, including the pandemic which highlighted disproportionate levels of health care. A scheduled meeting on June 3, which initially had 40-50 RSVPs, skyrocketed to over 150. Engagement has become especially high and now more than ever, young professionals and community leaders are focused on what can be done to change things going forward. Strong barriers of historically systemic racism exist, however, making long-term direct action a difficult endeavor to undertake, according to Harley.

“I think what you’re seeing is the result of some holes within our education system,” explained Harley.  “You’re not made aware through your social studies or history courses of the true brevity of race relations and their implications. You can go your entire career and not touch upon this topic.”

Programs like LeadDiversity, which are partnered with the Chamber, is designed to help community/business leaders grasp a newfound understanding of diversity, equity, and inclusion. It aims to provide an additional toolkit, widening the scope of what’s happening within the community. “We have a responsibility to educate ourselves,” she stated.

Harley firmly believes this year has become a “disruptor” which will spark an advance in inclusion down the line, turning this from a ‘moment’ into a ‘movement.’ The unprecedented level of national unrest, from the pandemic to the death of Floyd, has given an equally unprecedented avenue for tough conversations to be had about race and diversity. “I’ve seen more changes over the past two weeks than I’ve seen in a long time,” Harley said.