Home » News » The Strength in the South Omaha Vote 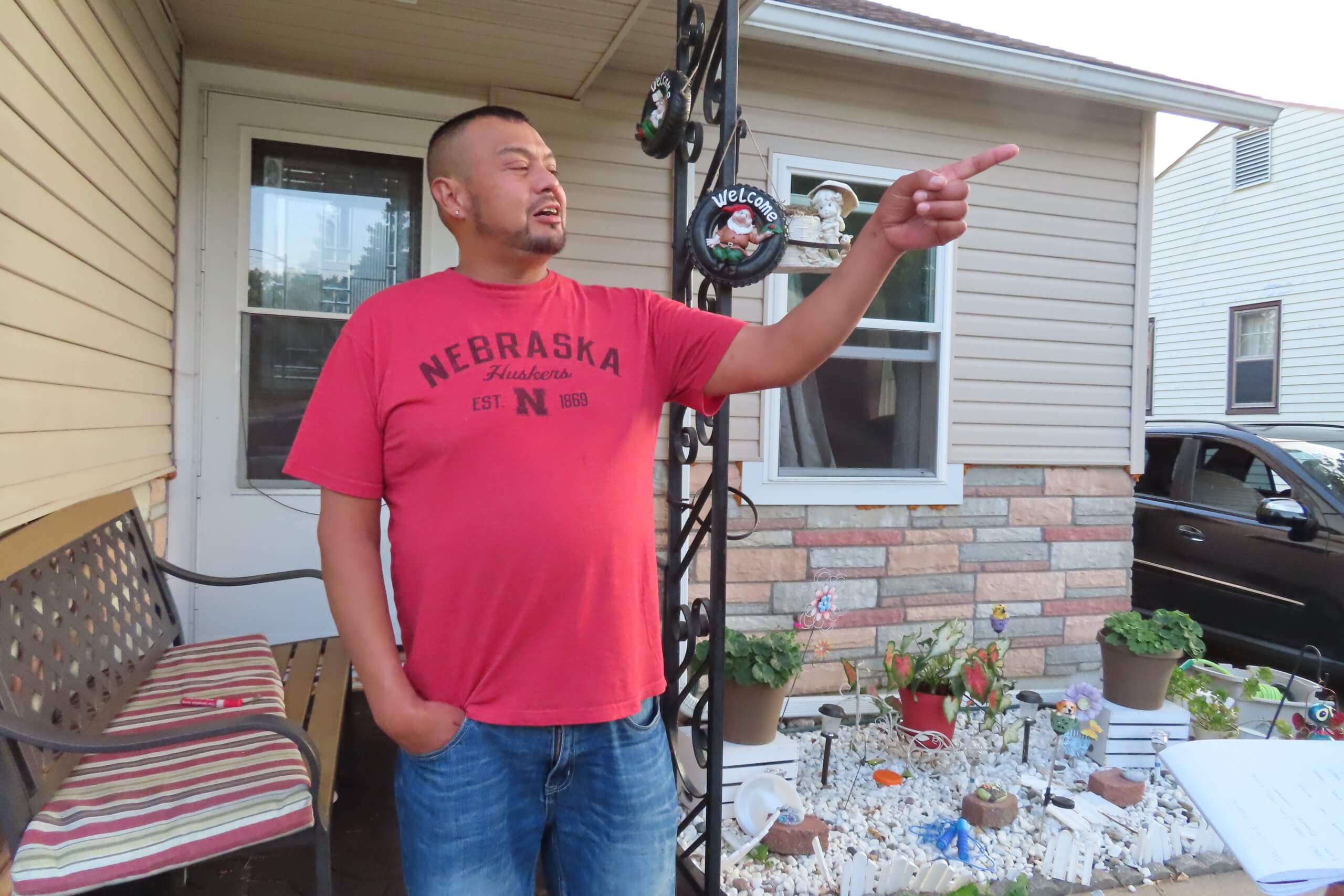 This is the second story in a three-part series about efforts to increase voter turnout in East Omaha. Read first story in English and Spanish. Read this story in Spanish on El-Perico.com.

The squat, single-family ranch has a narrow porch looking out onto a small, green lawn. The street out front slopes toward a park, which right now his kids are racing toward on skateboards.

Alberto Ruiz likes the house he and his family live in.

The 47-year-old Mexican immigrant bought the South Omaha home in 2002, moving in on the July 4 weekend. Since then he and his wife have worked, raised their kids and made a good life in the neighborhood on the far southern edge of Douglas County, which features shady streets of other squat, single-family homes as well Southside Terraces, the city’s largest public housing complex.

But Ruiz knows there are differences between this area and others in the city.

“If you go up the street or out west, you don’t see sidewalks like this,” he said, looking toward the cracking walkways.

For a long time, this area has felt neglected. 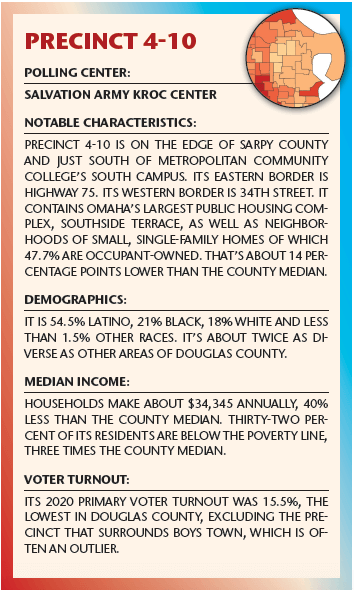 It’s more racially diverse than most in the city. It has higher rates of poverty, a lower median income and, for years, some of the lowest voter turnout in Douglas County. This past primary, only 15% of registered voters of the area cast a ballot, less than half the county’s median. In past elections it’s trended even lower.

“They make you feel like you don’t count. If you’re Latino, they put you on the side,” said Ruiz, whose neighborhood is more than half Latino. “They only go for white people.”

But those numbers could change radically this year. While in the past it’s been hard to draw parallels with community needs and voting-based solutions, 2020 has provided immediate examples. The area’s seen more than 2,000 cases of COVID-19, nearly double the caseload in the next hardest-hit zip code in Douglas County. And ever since protests around racial justice erupted in May, more people seem awake to social inequities, said Kimara Snipe, president of the area’s neighborhood association as well as the president of South Omaha Neighborhood Alliance.

In 2020, a presidential election could hinge on Omaha. A congressional rematch, decided by less than 5,000 votes in 2018, will take place. Countless local offices are up for grabs. And the sleeping giant, hundreds of thousands of votes worth, lies east of 72nd Street.

“The voting power in East Omaha is enough to shift the whole political climate in [Nebraska’s] 2nd Congressional District,” Snipe said. “There is power in these communities, and people just don’t know that.”

For a long time this neighborhood, like many around it, has been blue collar. Only a short drive from meatpacking plants, the majority of homes were built before 1939 with little development after the ‘60s. As whites left for the suburbs, Latino and other immigrant populations of Omaha moved in, picking up their working class lifestyle.

Today, immigrants with a variety of citizenship statuses, including refugees, make up a large portion of this community. That comes with more language and cultural gaps to bridge than a typical neighborhood, and it’s a large reason it’s been left out of typical get-out-the-vote efforts.

“Up until now, it’s been completely ignored,” Snipe said.

Heartland Workers Center, in particular, targeted the area following its 2020 primary voter turnout, the worst in the county. They’ve started using the campaign slogan, “I Vote for My Family.” It’s a call to action for those whose citizenship status allows for voting to be a voice for their loved ones.

“This is the main message as an organization,” said Lily Reyes, a senior organizer in South Omaha with Heartland Workers Center. “Make your voice heard. Don’t permit other people to decide for you. If you want to see changes, make it happen.”

Due to the pandemic, the organization has had to modify its get-out-the-vote strategy. Normally volunteers and staff would canvas across the state, but this year they’ve switched to more phone banking. That’s hard in an area like 4-10 where a lot of people are harder to reach by phone or internet. On Sept. 15 they set out to physically canvas the homes that couldn’t be reached remotely — 252 houses, by far the largest number of any other precinct, organizers said.

Along the way, they met young college students who knew nothing about the candidates, homeowners who said they were telling all their neighbors to vote and others who said they knew they should vote but didn’t know how.

As they walked the streets clad in bright green vests, they also informed people about planned redevelopments in the area. Southside Terrace complex will be demolished to make way for new homes and community spaces, though exact plans haven’t been decided.

“One of the main things that we want to do is change with the participation of the community,” said Penelope León, a community organizer and trainer with Heartland Workers Center. “The community is going to say what they want or [what their] dream for the area could be.”

With social and health issues banding people together and the promise of a new development in the works, people are getting inspired, Snipe said. But change has to come through community organizing, she added, because low-income, diverse communities such as 4-10 need their voices amplified.

“People are not able to come into their own power,” she said. “Oftentimes we go into these neighborhoods that are suffering from poverty, and we just make the wrong assumption that there are no positives. But we don’t look at the positives.”

Protests in 2020, specifically those against the treatment of minorities by police, have ignited diverse communities. Snipe said social inequities are now a frequent topic whenever she talks to her neighbors.

“There’s power in being civically engaged and knowledgeable,” said Snipe, who’s also a member of the Omaha Public Schools board. “That’s why I was able to be in poverty and still be out here and be someone considered to be a leader and a decision maker,” she said. “You can be broke as hell and still do your thing, but people don’t realize that.”

Once the community organizes, voter turnout can rise. Hundreds of thousands of votes from here and neighborhoods like it could swing elections in a new direction. It could mean politicians courting voters or developing policies to improve their communities.

When Snipe imagines that reality, she thinks about the message it sends to politicians.

Increased political accountability could have helped limit the spread of COVID-19, Snipe said. State Sen. Tony Vargas fought for COVID-19 protections in this district, but the legislative effort stalled in Nebraska’s Unicameral. 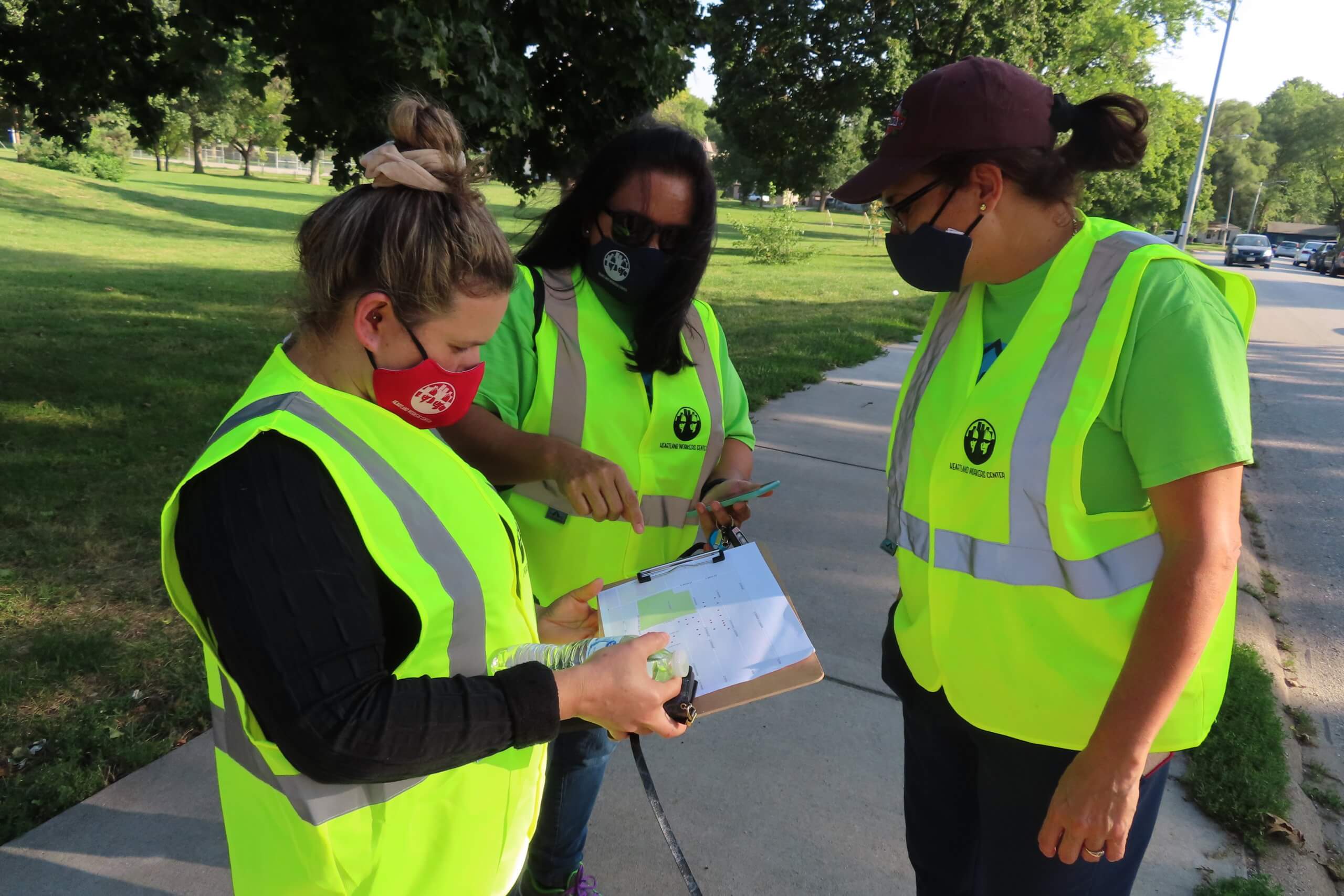 Ruiz works as a forklift operator in a meatpacking plant and contracted COVID-19. His family got the disease, and his wife, who has asthma, spent time in the hospital. Ruiz said a man he knew, who came out of retirement to work a few shifts at the plant and save up some money, died from the disease.

Increased political attention and accountability could aid in discussions like policing or investment in community resources, which very briefly took center stage in the Omaha City Council.

It could also have national implications. Pundits in their election simulations keep coming back to one place that could be the tipping point in electing the next president of the United States: Nebraska’s 2nd Congressional District.

With its one electoral vote, Nebraska could (big capital “C” could) be the tiebreaker between President Donald Trump and Vice President Joe Biden. With a high population of Black and Latino voters, who poll unfavorably against Trump, a precinct like 4-10 holds sway.

These are electrifying new jumping-off points for organizers like those with the Heartland Workers Center. But it’s also just another opportunity to continue bolstering electoral power in East Omaha.

“I have been doing this job for more than six years,” León said. “At first I was skeptical. I didn’t believe that we could make a change or make a difference. But after every election we have seen the rates increasing in South Omaha.”

“Then we saw the candidates doing canvassing around South Omaha,” she said. “We started hearing spot promotions in Spanish from candidates. So I know what we are doing is the correct thing, and we’re going to increase voter participation.”

Snipe feels the same way. There are more forces at work that could push people to cast ballots than ever before. And after years of organizing work, she can envision a reality where the people of 4-10 recognize they have control over this election and their community.

She doesn’t want to get ahead of herself. 2020 is a big election year, but the fight to engage this community has been long. This is just another step in the process.

“The truth is that we’re not going to fix this tonight,” Snipe said. “We’ve been having this conversation since the ‘60s, since before that. Let’s be honest. But we have not had this level of activation before.”

Check back for the third part in the series: “Get Out The Vote: A Look Behind the Ward.”