Home » Specials » What’s In Your Food? 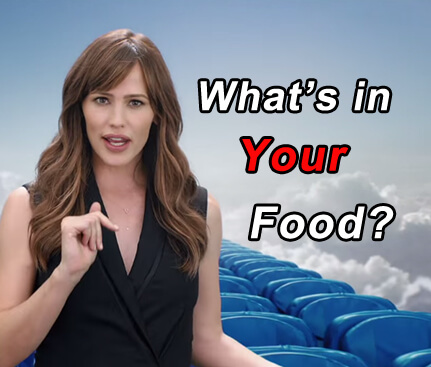 German shepherds have notoriously sensitive tummies. So when our big one had a little upset recently, I headed for the store to get fixin’s for his bland diet routine: lean ground turkey breast and plain white rice. I was hurried so stopped at an (unnamed, headquartered in Des Moines,) supermarket instead of my usual run to Whole Foods. The meat section at said market sells pre-packaged ground turkey. I asked the “butcher” at the counter if they ground in-house. The answer came back “no” and he added that the turkey was packaged “in some kinda gas that keeps it from spoiling,” in a tone indicating he thought that was a pretty cool thing. It wasn’t exactly accurate but I understood. He was referring to the industrial meat packaging standard of “modified atmosphere packaging” that immerses meat in carbon monoxide (a poison, as we all know) to rob it of oxygen, the element that accelerates decay. But I was in a hurry and after all, it’s for a dog. On I went to the white rice aisle.

When I got home, I began to prepare the food and glanced at the labels again. I shook my head that the ground turkey, a Cargill product, listed “Ingredients: turkey breast, natural flavoring.” What the heck is wrong with turkey that you have to add flavoring to it? I looked at the rice bag, a private-label product from the grocer. Sure enough, it was more than rice. It, too, had additives. In this case, the ingredients read: Long grain white rice, thiamine (thiamine mononitrate), niacin, iron (ferric orthophosphate), folic acid (folate). Why does rice need a list of added unmentionables?

More junk in your trunk. Turkey and rice are what I went to the store for. Those are foods I wanted for my queasy dog. But the rest? Chemicals. What’s wrong with food if you need to add something to it?

Here’s why “natural flavoring” in the turkey meat bothered me. “Natural flavoring” can technically mean just about anything. Federal rules say you can boil bark, roots, rocks, cow guts, yeast — just about anything — and add it to food and call it “natural flavoring.” So my turkey was an unspecified mystery additive, more than I asked for. As for the rice, that list is chemicals presumed to add nutritional value. And while some of the uninitiated reading this may think, “Hey, those are vitamins and good stuff they add,” I’ll say, “Nuh-uh.” Those are chemicals.

Drop acid. Folate is a naturally occurring vitamin available in green, leafy veggies which everyone should eat. Back 50 years ago, some studies found that a very small number of babies born to pregnant women with poor diets, deficient in folate, were prone to one particular birth defect: neural tube defect (NTD). So around 1998, the Feds mandated that the synthetic version of folate, AKA folic acid, must be added to certain foods. Sounds good on the surface, right? But folic acid is not folate. It’s synthetic. It’s not absorbed or metabolized like folate and folic acid is highly suspect of causing a number of problems. It can alter DNA. Studies suspect folic acid of being linked to cancers. Folic acid is implicated in causing cognitive impairment and unmetabolized folic acid has been found in the blood of seniors and in the umbilical cord blood of newborns. That’s a problem we don’t fully understand, yet we order food manufacturers to add suspect additives. And, as the National Institutes of Health states, “With any public health intervention, there are concerns about potential adverse consequences.”  And, with the main goal of preventing a birth defect that affects less than four one-hundredths of a percent (.035 percent) of pregnancies, you have to ask why we forcefully feed a suspected synthetic chemical to 150 million men in the United States. Huh?

B-1 bomber. Vitamin B-1 is also known as thiamine. It’s vital to human health and available in whole grains, pork and other foods. Thiamine occurs naturally in food. Thiamine mononitrate, the synthetic version added to food, does not. And thiamine mononitrate can cause liver and kidney problems. It’s nearly impossible to flush out of the body because it accumulates in fat cells. It’s not a good thing.

Learn to discern. These are only two examples of food additives in two simple foods: ground turkey breast and plain, old white rice. Yet they both end up giving me — or rather my German shepherd — more than I want, more than he needs. What has it come to that those simple foods end up with additives from the processors, additives that are obscured, unexplained and uncalled for? How far off-base have we gone that we feel the need to mess with things that nature put together? The only plausible argument is that we have messed up nature so badly that the food it provides is now deficient because of the way we raise it or grow it.

Some additives may be benign. Some may even be good to add to food. But in the long run, the only reason to add anything to food is because of some inherent deficiency and real food, good food, whole food, is not deficient. That leaves human behavior. If real food isn’t deficient, then the humans choosing to select adulterated, processed food must be the real deficiency here. Choose better. Raise your red flag when you see chemical names or terms like “natural colors” or “natural flavorings.” Don’t buy it. Buy food instead.