While one may be familiar with The Wizard of Oz, the story made famous by Frank L. Baum in the MGM 1939 film, you may not have heard of the many prequels and sequels that followed.  The book The Wonderful Wizard of Oz and the Marvelous Land of Oz predates Dorothy and Toto, and outlines the tale for which The Woodsman is based upon. In the book a character by the name of Nick Chopper, a woodsman smitten by a beautiful Munchkin maiden, falls prey to the Wicked Witch of the East, conjuring a spell that causes his ax to lop off his limbs, one by one, till he is left with a tin body and no heart to love. In The Woodsman, a theatrical interpretation and adaptation of the original story, the Wicked Witch of the East has sieged the Munchkin land and forbidden words from being spoken, deeming them to be dangerous. This proposes a challenge with a communication void of language that is incomprehensible, and so the entire piece uses nothing but movement, sound, and the occasional lilt of song. Anything nonverbal is conveyed and portrayed, from grunting and groaning to squalls and clamor. 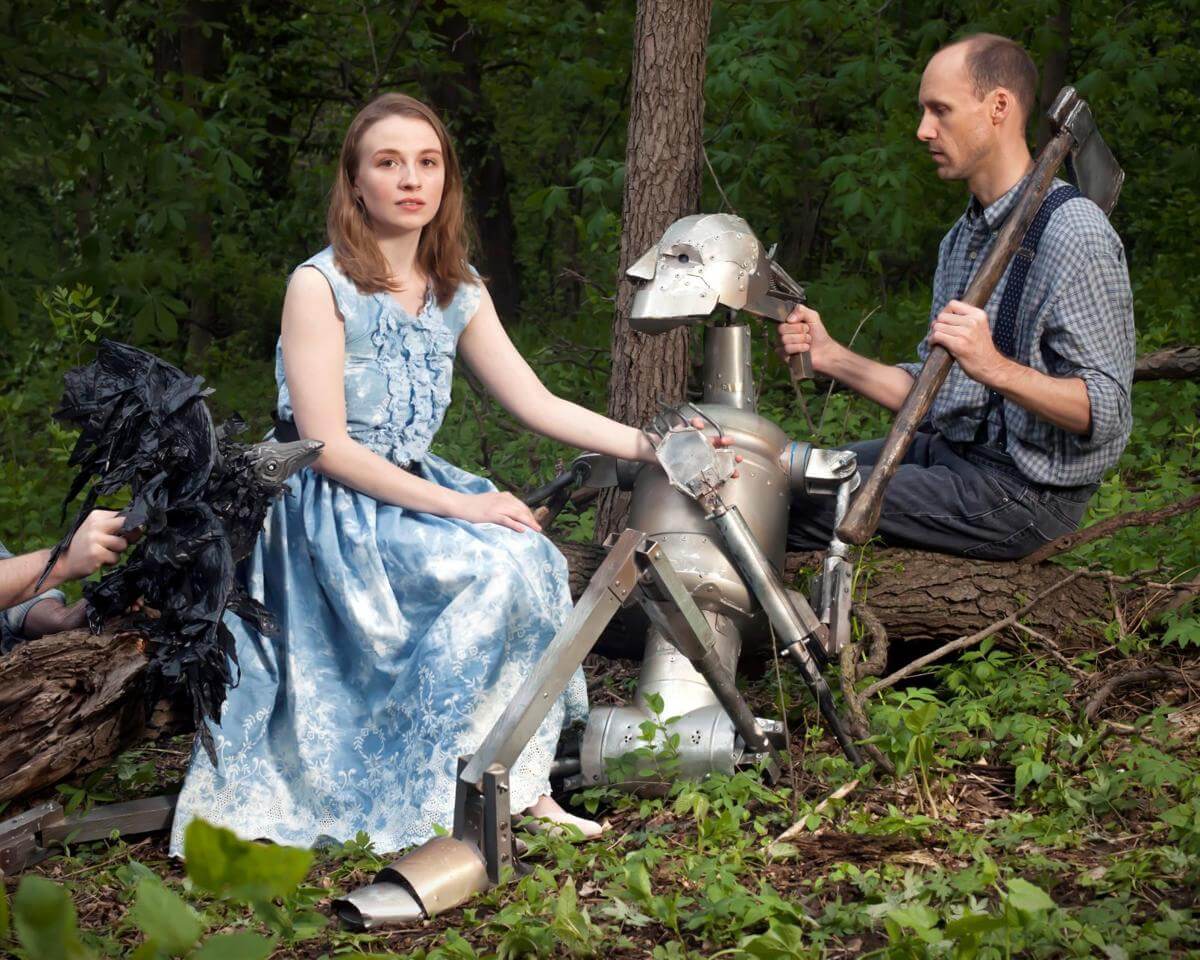 The BLUEBARN’s staged production of The Woodsman in collaboration with STRANGEMEN Theatre portrays this lesser known tale with precision and perfectly executed timing, exploring the art of pantomime, Banraku puppetry, and musical accompaniment. In most modern pieces of theatre dialogue is commonplace, but this show dares to think outside the box in terms of its nonverbal expression. Fluid motion is key with unison breathing. Breath signals the next transitioning scene, alerting the actors what comes next. The ensemble moves and breathes cohesively as a whole unit. Creative innovation is at work and there is a remarkable use of sound effects and lighting. Throughout the entire seventy-five-minute production actors are creating sights and sounds of the piece, from imitating warbling bird calls to snapping their fingers, adding to the crackling effect of a blazing fire. The timing is impeccable.

Several memorable actors (Anna Jordan, Matthew Olsen, Beau James Fisher, and Mike Burns,) are dynamic, animated, and engaging to watch. Jordan portrays every emotion without words, but still gives a powerful portrayal of her character’s innately magical abilities and prowess. Fisher and Burns serve as comedic fix-it Tinkers, adding a light and whimsical element to the otherwise dark narrative. The haggard visage of the Witch is daunting, yet the puppet manages to capture your attention for the whole length of time. A fantastical monster creature is one of the highlights, and the execution maneuvering the beast on stage renders that of a feat alone. The massive puppet is formidable and heightens the momentum and excitement building.

Note that there are some deviations from the book in the script. Imprisoned by the Wicked Witch of the East, the Munchkin maiden Nimmee chances upon Nick Chopper in a forest one day and she wins his heart. With a vengeance the Witch enchants his ax to prevent him from pursuing the maiden further, turning him into a man made of tin with metal prosthetics. Nimmee is the daughter of a powerful sorcerer, and this becomes evident. Overarching themes of lost love, sorcery, and a tragic hero are nuanced throughout, and the heart is a central theme to the plot. It keeps time to the chopping of trees in the woods and signifies the love between Nick and Nimmee.

Playwright and director James Ortiz artfully wears many hats. An actor in the original production, he serves as not only the director in the Omaha debut but also as writer, designer, and puppeteer. Ortiz draws from a myriad of inspiration including the pantomime and masks of LaCoq, and the first American folktale of The Wizard of Oz. In 2016 The Woodsman garnered an Off-Broadway accolade, an OBIE award for its work featuring Ortiz’s puppet design. Ortiz is the co—founder and creative director of STRANGEMAN THEATRE COMPANY. Music by Edward W. Hardy and lyrics by Jen Loring complete the ambience of the piece.

Watching The Woodsman leaves you a little wistful, melancholic even with its heartfelt performance, but appreciative of the time spent to refine such a stellar production. Relying solely on visuals to convey meaning, you’ll want to take in every moment, emotion, and not miss a single beat.