Home » Uncategorized » Why I Meditate 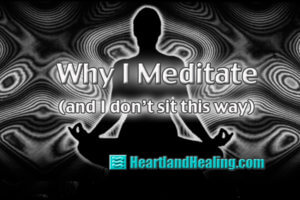 My first brush with meditation turned out to be something other than meditation. As a sophomore in high school, our Jesuit theology teacher wanted to teach us and he gave it a go. ( I love the Jesuits. They taught me freedom of thought and respect for intuitive knowledge.) After a brief description of some of the benefits, he told us to close our eyes then asked us to imagine a snow-covered frozen lake. At one corner of the lake was a man with a snow shovel and we were to imagine the man slowly walking in a straight line from shore to shore pushing the shovel in front of him. And that was it. My sophomoric high school mind wasn’t impressed. Only years later did I come to realize that he was teaching us more of a visualization than a meditation.

Years later, in April 1983, was the next time I thought about meditation. Living in Hollywood, whenever I stayed at Mimi’s cottage townhouse in Westwood I would find her rising before me early in the morning and sitting in a chair downstairs with her eyes closed. She had told me to expect that she would be meditating in the morning. One day I asked her what kind of meditation she did. She told me she learned Transcendental Meditation and followed with, “If you ever want to learn meditation, learn TM. When you learn TM, you know that you are truly meditating. TM is sort of like the ‘Cadillac of meditation.’ “ Those words stayed with me.

One year later. Ron Altbach was executive producer of a major live concert album and television broadcast I engineered. It starred the Beach Boys, America, Ringo, Hank Williams, Jr., Julio Iglesias, Three Dog Night and a host of others. It was a complex project and required tremendous technical expertise both on the day of recording and in post-production. Problem-solving techniques often saw me huddling with my techie assistants mulling solutions. As we geniuses bantered about which way to proceed, on more than one occasion, from the back of the room came a quiet and unassuming comment, usually along the lines of, “What if you…? Would that work?” The speaker was Ron. And each time, his solution was a good one.

After two or three of his successful suggestions, I asked him, “Ron, you’re not an engineer or tech. How are you coming up with these solutions? Where’s that coming from?” His answer was simple: “I think because I meditate, I’m able to assess situations more clearly.”

We talked about the meditation he learned, Transcendental Meditation, and it stuck with me. Three months later I learned TM at the Beverly Hills TM Center on 3rd Street. It took four sessions over 5 days and was easy. It wasn’t free or even cheap to learn. But it may go down as the best money I ever spent. Extrapolated over the years since, it’s worked out to about two cents daily. And it’s becoming a better deal everyday.

What it is and isn’t. I often have occasion to talk to people about their meditation. Some say they listen to a recording. Others say they sit and listen for answers. Some stare at candles. Some even say things like, “Mowing the lawn is my meditation;” or “I’m meditating when I’m on the treadmill at the gym.” Well, my comment about that is that listening to a recording is just that: listening to a recording. It’s not meditation. Mowing the lawn, staring at a candle or working out are fine. They are exactly what you say they are but they’re not meditation. Meditation is a specific skill best passed from teacher to student. It’s not a byproduct of another activity. In a simple description, it is intentionally sending the mind toward a state of thoughtlessness; not thinking. It is clearing the mind, releasing it from the random thoughts of the conscious, babbling intellectual mind and seeking to quiet the mind. It is not actively using the mind to request things, hear guidance or watch candles burn. That’s as simple as I can state it. It is experienced, not described.

Benefits of meditation. There is an extensive list of benefits to actual meditation. And, admittedly, there are some minor ones that become available to simple relaxation and focused attention like just resting for a period of time. Descriptions of the many benefits of meditation are easily found in books or online. Transcendental Meditation has been studied more than any other technique and research statistics are plentiful. It’s surprising that it’s not covered under health insurance or Medicare.

For me. I’ve been doing TM daily since 1984, missing maybe a half-dozen days at most. Do I do it for the benefits listed? Maybe. I don’t think about it. Have I experienced TM leading to amazing health benefits for me? I have experienced some examples so I guess you could say so. But there is one overriding reason why I do TM every single day: It feels good. If it didn’t, I’m sure I would stop. To paraphrase Clint Eastwood, (who, by the way, does TM everyday,) “Do you want to feel good? Well, do ya?”

Heartland Healing is a metaphysically based polemic describing alternatives to conventional methods of healing the body, mind and planet. It is provided as information and entertainment, certainly not medical advice. Important to remember and pass on to others: for a weekly dose of Heartland Healing, visit HeartlandHealing.com.
2019.08.27