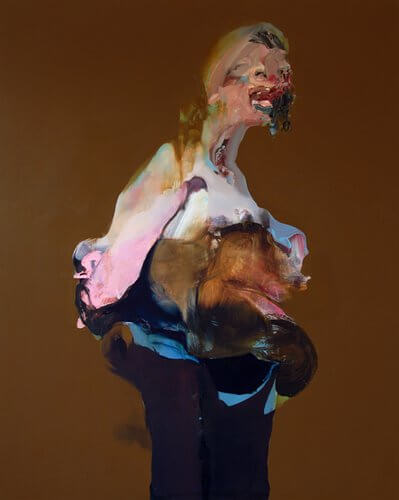 When Modern Arts Midtown owner-director Larry Roots first saw the work of Theresa Pfarr as a juror for Kimmel Harding Nelson Center for the Arts Residency Program in 2006, he was instantly enthralled.

“Its amazing what she can produce with just a few number of strokes,” Roots said of Pfarr’s figurative abstract oil paintings, on view at Modern Arts Midtown in Face to Face, thru April 28.

It is no wonder, as Pfarr’s clear ability and passion for the craft is akin to Roots’ own. As evidenced in the back of the gallery with a few paintings by Roots (who is represented by the gallery), he too uses few marks and strokes to hint at forms that create sometimes haunted impressions.

Roots’ work, though, mostly gives off a reserved composition, almost shyly the images peak through their environments.

Pfarr’s subjects, however similarly abstractly askew and expressively haunted, appear bold, unafraid. Even in their skinny, mostly slumped, dolled-up female frames, their cocked necks and heavy stares seem to challenge viewers to think of them as weak.

Pfarr, who received the Kimmel Residency in 2006, examines the female image of beauty in our culture as it addresses her.  Since her beginnings, painting portraits of commercialized and sexualized young women, her work as evolved to more complex, sophisticated imagery as demonstrated in Face to Face.

The Virginia Commonwealth University MFA graduate and now Philadelphia-based artist described her artistic process: “As images stuff my mailbox, invade and clutter my space, I respond, answer, and react to their aggression through painting. In the effort to deflect the original meaning and hostile intention of these images I treat the cultural, commercial and personal as one in my work.”

Through a process of collecting, collaging and manipulating images, Pfarr’s resulted oil portraits are at once evocative and empowering.

“Pomp and Plenty” shows a narrow-framed woman in a low-cut dress, a hint of breasts, plump pink lips and the trademark somber stare. One of the few images of a woman not heavily slumped, the royal violet hue, upright stance and regal gown gives this fragile creature unstated purpose reminiscent of Gustav Klimt’s portrait of Emilie Floge.

Pfarr’s admitted favorite works in art history are Rembrandt’s two paintings of Lucretia, the Roman royal who took her own life in order to save her family from dishonor. The dark story and heavy contrast used by the famous Dutch portrait painter are evident in many of Pfarr’s works.

Notably so in works like “Garden Delight,” “Chantilly” and “Mad About You,” Pfarr uses solid dark backgrounds that contrast with the stark pale figures. The women are similarly dressed in fancy garb, with bright hints of flowers or patterns. Light seems to shine from below giving an emotional glow to the subjects.

Others such as “Lilah,” “Crush” and “Fever Pitch” use intense background hues for the solemnly situated young girls with bare white arms. The skinny, dainty arms give them fragility, but their intense looks, eyes sometimes blurred with her strokes, say, “so what?”

Pfarr has a way with her brush, sometimes with thickly driven strokes, others with smooth, fading color transitions, always in the juxtaposition to reveal her emotive intention.

“Sugar Lips” and “Oh Chloe xoxo” are heavily abstracted, colors expressively seemed to be almost splattered on the canvas at times, but the resulting pieces both calculatingly, compositionally complete.

In “Must Haves” and “Untitled (Gray head)” the artist is more explicit with her intention. Both show stand-outs at their elongated canvas size; the two show almost the entire figure, stopping at the calves. Standing in environments, they seem to tell stories beyond their skinny frames and hard stares.

“Must Haves,” the only nude, shows a woman clenching a fist of a bundle of bright hues. Her right eye wanders into the distance instead of the viewer, her left eye absent, the same bundle of colors as is clenched in her hands. Is she bearing all with her stark nudity (as it seems next to all the other clothed bodies), yet trying to protect herself, her own point of view, her eye, at least one of them, close to her heart? The background, also, is uncharacteristically split of yellow and brown suggesting a real, unstaged atmosphere.

The subject of “Untitled (Gray head)” is literally placed in her surroundings, her darkened ghostly face in the clouds. Wearing a simple brown dress, the figure stoops, holding one arm with one hand, suggesting a tired working woman, perhaps doomed, yet still challenging it all, with her haunting, barely-there, stare at the viewer.

In all, these albeit hostile-based subjects come across as fragile, yet ultimately quite unscathed and strong.  Pfarr’s talent in craft, intuitivism and ability to portray these delicate figures without being overlooked for this very objective, is astoundingly impressive and will no doubt continue to develop in her career that has only begun.

Theresa Pfarr: Face to Face is on view at Modern Arts Midtown, 3615 Dodge St., thru April 28. Visit modernartsmidwest.com for hours and more information.