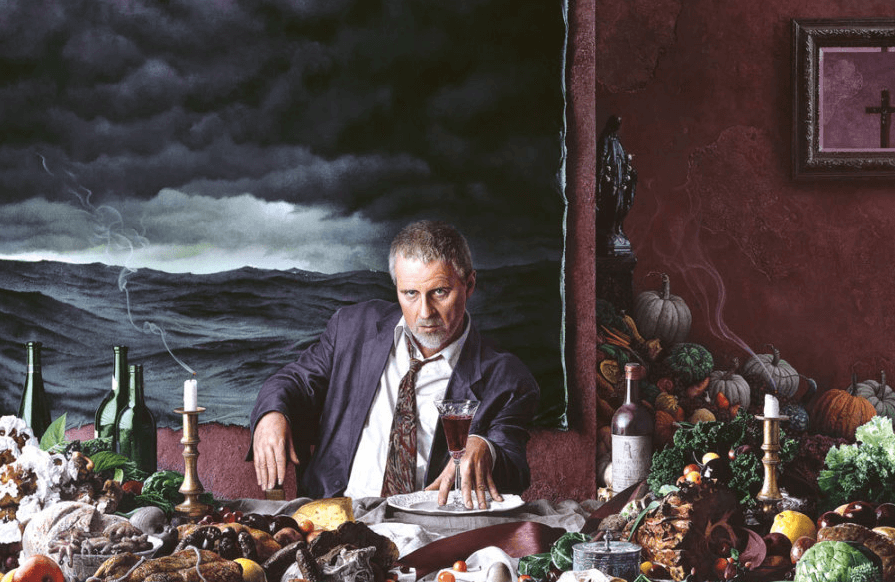 Summer is nearly over and the sights, sounds and smells of autumns’ approach come Sept. 23 are nearly everywhere.

Vacant public swimming pools are being drained while school buses, playgrounds and classrooms fill up with kids of all ages actually glad of a change of routine, scenery and faces…at least for now.

At farmer markets everywhere, foodies are turning their noses up at corn no longer sweet and carrots more wood than vegetable while anticipating the tart and sugary taste of fall’s harvest of apples in all forms.

That is, those of you who can still taste and smell anything thanks to a bumper crop of hay fever this season. You can tell the rest of us by our watery eyes and red noses that run and honk at levels that threaten to wake even the undead this All Hollows Eve.

Seasonal allergy sufferers look forward to the first frost more than most. Yet no more so perhaps than those for whom cooler weather means another round of Go Big Red, as FANatic as a second helping of apple pie here in Nebraska.

Husker fans have reason to wonder and hope that new football coach Mike Riley is the Second Coming, or is that the third or fourth? Is Riley the “latter day saint” that will show Brigham Young– football team that is—how the game is played and send an early message that Nebraska is on the way to its first conference championship in 15 years?

Sports fans aren’t the only ones with questions this fall. Patrons of the Metro arts scene also wonder: Will the much anticipated new Gallery 1516 open on schedule in October? Now that Bemis Center recently hired its new director, Chris Cook, who once curated for the Sioux City Art Center and the Kemper Museum of Contemporary Art in Kansas City, will the Kaneko make a similar announcement anytime soon?

Speaking of these two significant contemporary art centers that share a similar Old Market campus, will Bemis’ newly renovated auction late November be the successful fundraiser needed to jumpstart 2016?  And as for Kaneko, can we expect a timeline for construction to begin on a new Collection Building at the corner of 11th and Leavenworth based upon that amazing design by international architect Mark Mack?

We may have to wait a while longer for answers to the above, but what is waiting for those anxious to see the local arts vibe revive, is a plethora of diverse events and exhibitions waiting to invite patrons back into the fold.

And let’s face it, aside from a few consistently professional shows at local galleries, as with most summers, art took a vacation here in the Metro with the following exceptions: the single best exhibition, Art Seen at the Joslyn Art Museum, which closes Oct. 11: Adopt Art Omaha: Dog Show at RNG Gallery; a hugely successful $100 art sale at Project Project; and the recent opening of the Paolo Dolzan exhibit by the Moving Gallery.

Art venues of all shapes and sizes have much scheduled from September to early December, but highlights include the following. Details can be had at venue websites or by going weekly to thereader.com/events:

What should be high on viewers’ radar this fall is the inaugural exhibition that will officially open Gallery 1516 late in October, The Friends of Kent, which will highlight 40-50 original Bellows pieces, some of which gallery owner Patrick Dickey says have never been seen before.

“I’ve engaged Molly Hutton to help curate the exhibition,” Drickey said. “Molly curated the Bellows exhibition at Joslyn in 2010 and has agreed to deliver a presentation which will include an analysis of Kent’s early work along with his portraits. This exhibition will reinforce Kent’s artistic legacy and provide a solid platform for all those Nebraskan artists who follow.

By way of demonstration, The Friends of Kent will also feature several of such with work from Stephen Roberts, Edgar Jerins, Paul Otero, Mark Chickinelli and Gregg Scott.

But autumn will also include several other key arts events and exhibitions. Chief among them is Kaneko’s second annual fundraiser, Open Space Soiree and the opening of its key exhibit, Design in Motion, Friday, Sept. 18, 6:30-9 p.m. This original, site-specific exhibition will explore themes of movement, transportation, and the lines and curves of vehicle design.

Each of the automobiles in the exhibition is a unique and compelling work of art – but more importantly, Design In Motion explores the designer, the process involved, and the effects of these design concepts within and beyond their own industry.

A similar treatment is given to bicycles, complete with classic designs of the past and cutting-edge technological advances. Local bike shops are aiding in educational programming and outreach to celebrate bicycles as works of art and modes of transportation.

Another key fundraiser in September will benefit the Union for Contemporary Art as it launches it second $100 Art Sale, Sept. 12, beginning at 2 p.m.in Midtown Crossing, 200 South 31st Ave., Suite 4107. Not only will you be able to score a great piece of art for an incredible price, but also the two-day event includes entertainment, raffles, food and drinks and the chance to create art with some of Omaha’s most innovative artists.

Patrons also have a chance to preview the show Sept. 11 at 7 p.m. at the same site and develop a game plan for the main sale the next day, or if you find a piece that you just can’t live without, you’ll have an opportunity to make advance purchases at the “just gotta have it” price.

Fall’s series of fine and applied arts fundraisers will climax Nov. 21 at 6 p.m. at the Bemis Center for Contemporary Arts with its 17th Annual Art Auction and Exhibition. This year’s festivities will include a silent and live auction with more than 250 works of art from top artists, juried by Ellina Kevorkian, artistic director for residency programs, Alex Priest, exhibition manager, and Larry Roots, Modern Arts Midtown gallery director.

As it has in the past, Bemis will host from November 11–20, an Auction and Exhibition Preview with several additional events planned. A list of participating artists was not available at press time as they are being notified this week, but those who are, will hang alongside local, national and international artists in the biggest contemporary art event of its kind this year. As an added benefit, all artists will be automatically considered for the 2016 Juried Exhibition Award. Bemis Center’s Exhibitions team will select ten artists for a group exhibition on the main floor of Bemis Center in 2016 and announce the winners, Nov. 23.

According to curator Craig Roper, this art exhibition will focus on, among other things, “social anxiety, race, homelessness, empathy, identity, and the inexhaustible human drive to create,” something that Omaha’s streetwise photographer Herron specializes in. So much so that he will be a featured artist in RNG Gallery’s show, opening Nov. 14 which will include images from his book, When the Going Gets Weird, Herron’s personal journal of life on the streets.

The Metro’s three major university galleries all have key exhibits this fall including College of Saint Mary’s Hillmer Art Gallery which will exhibit Fr. Don Doll, a Jesuit photo journalist and Creighton University Professor Emeritus, who will share his photography featured in National Geographic highlighting his world travels for the Jesuit Refugee Service. The exhibit runs Oct. 26 – Dec. 18, with a reception, Nov. 19 from 5:30 – 7:30 p.m.

A pair of multidisciplinary visual artists and Creighton University alumni will open a joint exhibition at the Lied Art Gallery in August. Antonio Jacob Martinez and Tupac Martir have both studied, and taken as subjects, elements of mass culture, specifically athletics, film, fashion and media, and their effects on human life. Their joint show will open Aug. 29 and run through Oct. 16, with an opening reception and artist’s lecture, Sept. 11 from 5 to 7 p.m.

Also in October, UNO will likewise highlight two of its former art professors, Gary Day and Larry Bradshaw in a two-person exhibit from Oct. 12—Nov. 15. This retrospective will feature printmaking and computer animation works from Day and paintings that reflect Bradshaw’s ongoing contemplation of pattern as seen and as lived out in everyday life. A closing reception from 4:30-6:30 p.m., Nov. 12 will climax this exhibit;

A key exhibition in Joslyn’s Riley CAP Gallery is Third Place, a mythological world where life and imagination co-exist, first in the imagination of artist Brad Kahlhamer and second in the unique spaces of this alternative gallery. Kahlhamer draws from a variety of sources, including Native American traditions, punk rock, graffiti, country western music, and comic books, as well as Expressionism, Cubism, and Surrealism;

Speaking of alt spaces and missions, we can look forward to these exhibits from Project Project on Vinton St., Petshop Gallery in Benson and the Bancroft Gallery at 2702 South 10th Street.

Petshop invites its patrons this Benson First Friday to be “watching the ground,” an installation/performance exhibition by Nicholas Jacobsen, which opens Sept. 4. Influenced by geology, eastern philosophy and western psychology, “watching the ground” is Jacobsen’s attempt to “bridge the space between the objective study of and a presence with the processes of nature: ceramics, feathers, drawings and dirt.”

A juried art show that explores the diverse meanings, themes, history and transnational spaces of Latino art, ideas and creativity, will be held at the Bancroft Gallery from September 18 through October 2, 2015. Local artist Mike Juron will juror the exhibition, which is presented by UNO Office of Latino and Latin American Studies (OLLAS).

PP co-founder Joel Damon says they (Josh Powell) also have a “killer” October exhibition opening the 9th at the same above time with Charley Friedman (sculpture and performance) highlighted by a live performance by contemporary percussionist Tatsuya Nakatani;

Also known for its outside the box approach to art and artists alike, UCA will exhibit Kim Darling’s new show  POWER POSITION, which opens Sept. 18. Darling says her exhibit is a response to a cultural fear of being overwhelmed with punitive rules and regulations. No stranger to controversy or opposing the status quo, Darling seeks to “disempower these rules and provoke the viewer to consider the confidence of self-governance”;

Whether outside the box or outside the boundaries of the Metro, no private venue offers more enlightening exhibitions annually than the Moving Gallery. Currently enjoying a solo show of Italian artist Paolo Dolzan’s expressionistic and abstract drawings in the Garden of the Zodiac Gallery in the Old Market Passageway, MG will next feature the monumental, horizontal photographs of German artist Frauke Bergemann, Her solo show will open Dec. 10 at the Zodiac and it will continue her experimentation in virtual 3D perspective and POV, this time focusing on seasonal views of a familiar and personal landscape;

An art staple of the Old Market, Anderson O’Brien Gallery, presents work from two well-known, but very different artists, Lisa Tubach and her ecological and abstract paintings, Sept. 11-Oct. 4 and Joseph Broghammer and his colorful flock of familiar feathered friends but dressed in an iconography all of his own device, Oct. 9-Nov. 2.

And, at the other end of downtown in NoDo, Hot Shops Art Center’s schedule highlights one of several Dia de los Muertos shows in the Metro in October and reVITALize in November with works by Indigenous Sicangu Lakota artists Steve Tamayo and Paul High Horse that focus on the resurgence of educating the youth and general public on aspects of the Lakota language, culture, and history via mixture of traditional and contemporary 2D and 3D pieces.