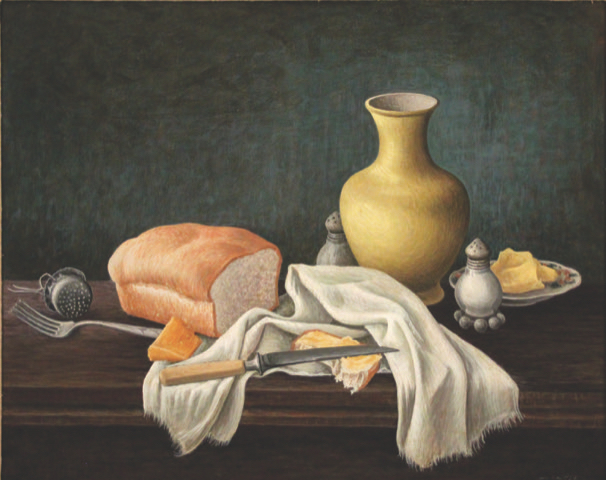 Coming fast to a close is the enjoyable and illuminating Nebraska Regionalists exhibit at Gallery 1516, in the heart of Downtown. This edifying and comprehensive show is the latest joint venture of Gallery 1516 and the Museum of Nebraska Art labeled appropriately MONA2Omaha.

It brings together a feast of artists responsible for a pivotal moment in the history of American art. The exhibit features many lesser known artists with a connection to Nebraska and its abutting neighbors, as well as examples from the usual cast of major figures in the larger movement; Thomas Hart Benton, Grant Wood and John Steuart Curry.

Although Benton, Curry and Wood were not Nebraskans, gallery director Patrick Drickey felt that no Regionalist exhibition would be complete without the context provided by the most visible representatives of the movement. Benton’s work is part of the MONA collection by virtue of his illustrations of Francis Parkman’s The Oregon Trail.

Wood, who juried the first Joslyn biennial, left his artistic legacy in Iowa. Curry, the Kansas native, spent the greater part of his career in Wisconsin. But their presence on the national stage and the resonance it had for Nebraska artists resonates throughout the rest of this show.

The Regionalists were a loosely knit group of artists, mostly painters and printmakers that were the Midwestern delegation of the broader American Scene art movement. The country was deep into a decades-long drive, 1930-40, for a seat at the adult table in the world art scene.

The new century had ushered in a preoccupation with realist art, with its focus on the inner-city; imagery of prostitutes, drunks, laborers and crowded tenements. A group of these artists, called The Eight, were the driving force behind the American Scene movement. More well known as The Ash Can School they, along with artists of the Southwest dominated.

The country at the time, however, was primarily agricultural, and the midwestern artists responded with art of their own, called Regionalism. It was a rejection of the rapid industrialization in the east. It grew from fear and uncertainty of war and the Great Depression. Most importantly, however, it was a rejection of the abstraction and modernism of European art movements.

In the pantheon of art’s isms, Regionalism was positive, reassuring, and celebrated endurance and perseverance. It was patriotic and designed for public consumption. Indeed, many of these artists sold their works as illustration for books, magazines and newspapers. The perfection of various printing processes allowed many to sell numerous reproductions, making the art more affordable to the wider public. 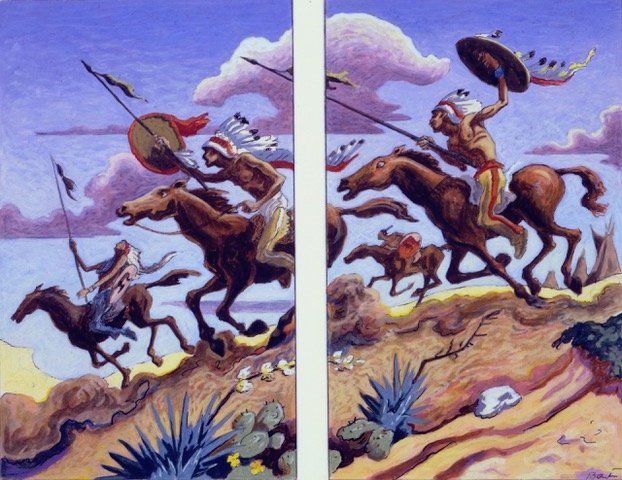 The Regionalist movement is most often attributed to three artists, Benton, Curry and Wood. They are, by far, the most well known of the Regionalists, and they all have quite a number of works in major museums.

This show features a handful of examples by this holy trinity. These pieces, however, are not the most recognizable of their works, except for maybe Curry’s “John Brown” print. Curry’s “Golden Horse,” and Benton’s “Indian Attack” and two lithographs, are much less known, but still show us the breadth of their talents. The Grant Wood pieces “Shrine Quartet” and “Honorary Degree” are a welcome respite from the overexposure of his “American Gothic,” and exemplify his humorous side.

Another featured artist here, Terrence Duren, is often mentioned in the same breath as the big three. He was a regular in the Omaha World Herald Sunday section and taught and studied both here and abroad. Duren’s piece in this show, “Web Ray, is an oil portrait that could easily be included in the 1946 Illustrator’s Annual. Though he is only represented by one piece, he was hugely successful as an illustrator, commercial artist and set designer.

Born in Kansas, artist Aaron Gunn Pyle, who lived most of his life in Chappell, Nebraska, is prominently featured with three exemplary works. His “Wheat Harvest” and “Wagon Near Chimney Rock”, both tempera on board, are perfect Regionalist examples from this full-time farmer and former Benton student. It is told he only painted after chores were done. It is not difficult to see the influence of Benton in his work. Pyle’s work was often featured in the Omaha World Herald. 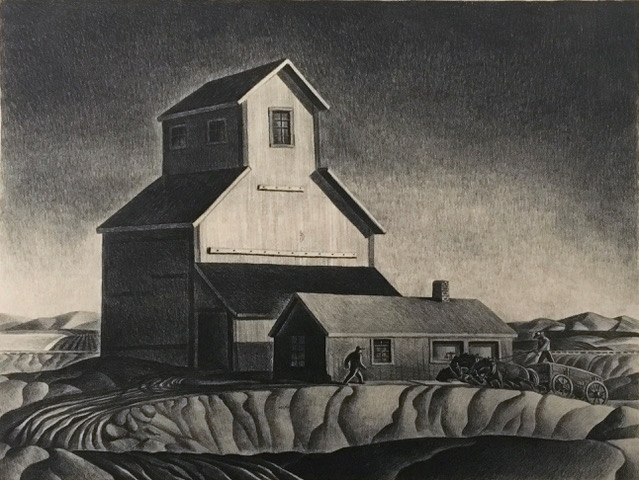 In addition to Pyle, another of the more well-known and collected artists is Dale Nichols. From David City, which is home to the collection of his work at the Bone Creek Museum, Nichols is represented by his smaller print works; one lithograph and four woodblock prints.

These pieces are not widely seen, but they are good examples showing rural imagery of people actually involved in work or classic landscape images. Nichols was a big fan of Rockwell Kent, and a couple of his woodblock prints show some influence.

Also in the show you will see the large versions of Nichol’s famous “Four Seasons“ series. These were a commission from actor and art patron Vincent Price in the 1960’s. Price was and avid art collector and had his own gallery in Chicago. 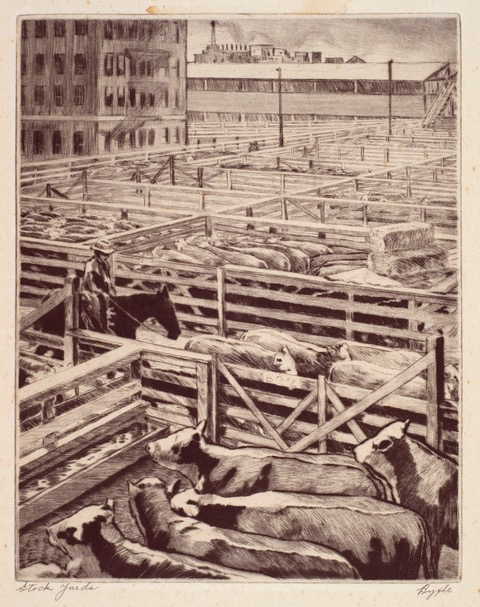 Many of these artists, even the working farmers, had formal training and studied even with some of the masters. Others, such as Lyman Byxbe, had no training at all. Byxbe was born near Pittsfield, Illinois. Though he had no formal school training, he was artistically inclined from a young age, and as an adult learned the art of etching from Omaha architect Mark Levings.

Byxbe worked primarily in drypoint, aquatint, and etching, but also executed works in mezzotint, conté crayon, oil, pencil, and watercolor. His etchings are formal and line work clearly shows the influence of working with an architect. He was elected to the Chicago Society of Etchers and had a one-man show of sixty-some items at the Smithsonian in 1937-38. 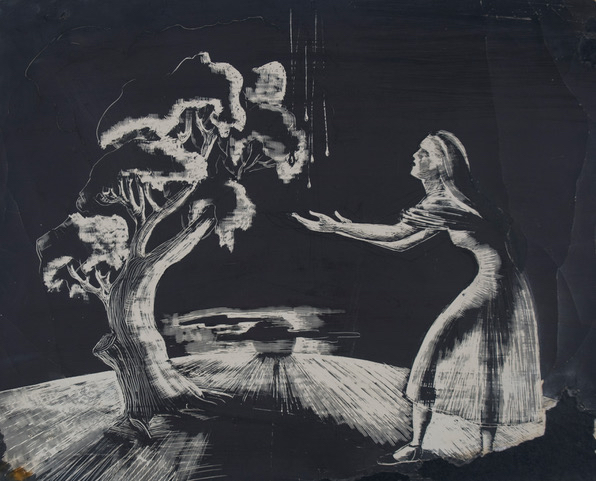 The show also features several female artists. SaraAnn Mathilde McWilliams Levell is represented with two scratchboard works of haunting simplicity. Though the works show the ravages of time, they succinctly represent the trials many had to deal with at this point. 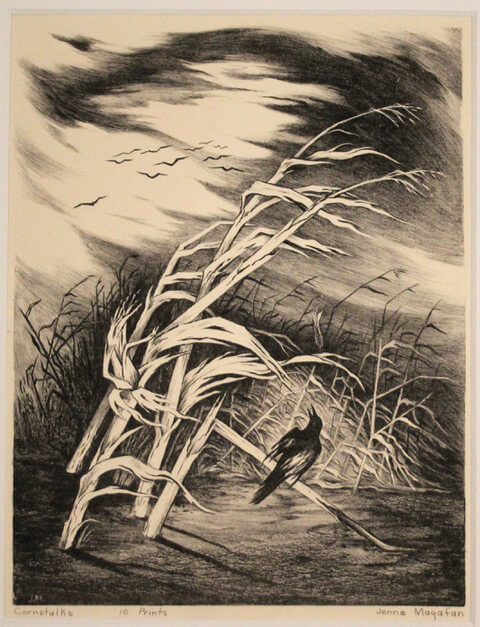 The twin sisters Ethel and Jenne Magafan, who created drypoint and lithographic prints, respectively, are featured here with detailed and romanticized everyday situations of wash on a clothesline and corn in the wind, rendered with an experienced artists touch.

Another standout in the exhibit is the striking cubist watercolor by Katy Burnap Faulkner called “The Barley Mill.” This and many others in the show are evidence that these rural artists, many working farmers, were just as knowledgeable about trends and styles of art as any others.

The exhibit offers many lithographs and other print processes, like the two-color woodcut prints of Morris Gordon, evidence of the popularity of those processes and of the variety of mediums.

Unlike last summer’s impressive John Steuart Curry: A Regionalist Perspectiveat The Kiechel Gallery in Lincoln, this show is a wider survey of what was happening at the time. This exhibit offers more than 50 works by over 20 artists known for their Regionalist work.

Several works are examples from the late 1940’s, 50’s and 60’s. Most of these artists continued in the same style well after the height of the Regionalist popularity.

There is too much going on to cover it all here. See the show. Whether it be devoted academics and administrators such as Dwight Kirsch, or a successful illustrator like John Falter, who gave Norman Rockwell a run for his money, or primitive purists like Byxbe or Levell, this show is as much a delight as it is informative.