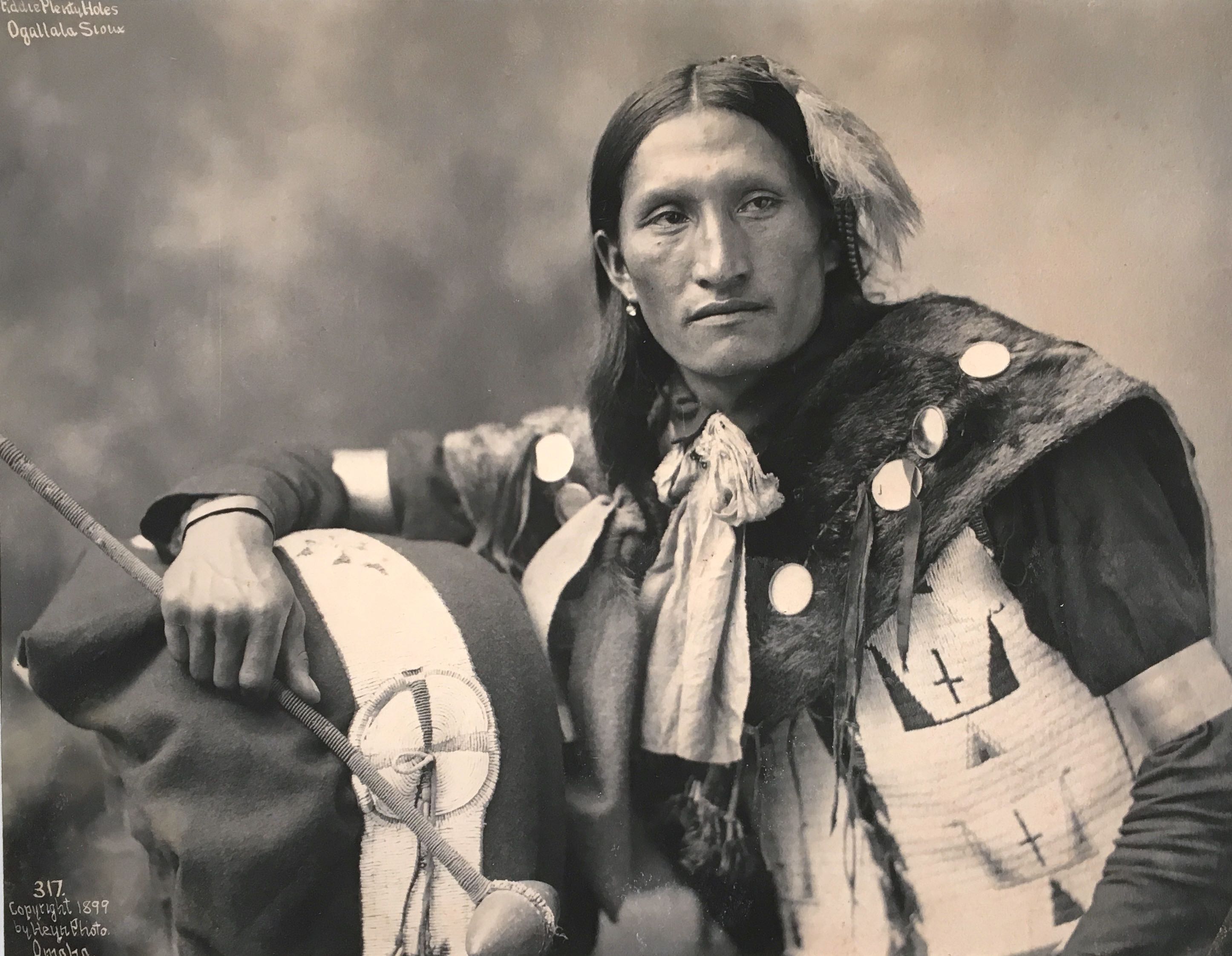 Photo Stories: Selections from the Museum of Nebraska Art (MONA) isn’t a “talkie,” but it speaks volumes. Over sixty photos from 1866 through 2006 spin tales of Nebraska history and culture, American icons, and, for photo buffs, a back story of photography representing nearly 150 years of changing technology and style.

On display through March 26, Photo Stories, one in an ongoing series known as MONA2Omaha, brings the museum’s extensive collection of Nebraska art and artists to Omaha. This museum-gallery collaboration seeks to focus on the work of artists who are connected with Nebraska as a result of their birth, residency, education, or work in the state, or through their focus on Nebraska culture.

MONA ArtReach Curator Russ Erpelding selected works from the museum’s archives to coincide with Nebraska’s Sesquicentennial celebration creating an exhibit that will make local viewers “shutter” with pride over the talent of their native sons.

Born in 1936 in Shelby, Nebraska, Bill Ray is known for his celebrity portraits featured in Life, Time, Smithsonian and many other publications. His oversized black and white “Marilyn Monroe” print captures Monroe’s sultry mystique from a unique angle the night she sang “Happy Birthday” to JFK in Madison Square Garden.

In glaring contrast to Marilyn’s sophistication is “Coven of Old Ladies,” a peek into a group of Hell’s Angels “old ladies,” or girlfriends, most of who voluntarily attached themselves to the gang. Lounging in a café booth, one young blonde sports hair curlers and a bandaged broken nose suggesting the risk of gang association. Bill Ray captured these photos and other documentary images as he and writer Joe Bride rode with the gang in 1965. 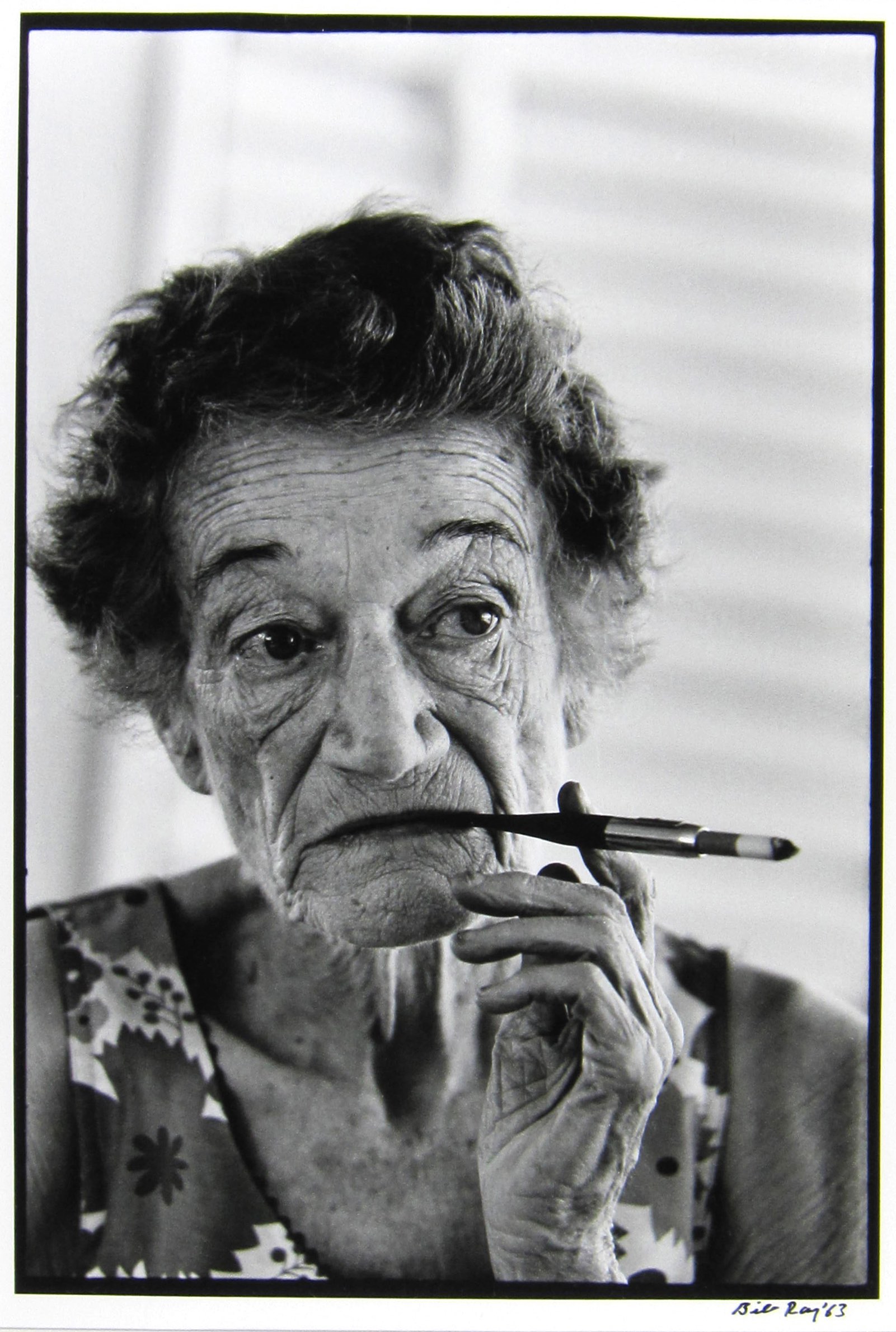 Another of Ray’s photos, “JoJo Goldwater,” depicts an 89-year-old woman smoking from a stubby cigarette holder. Her leathered skin and rheumy-eyes testify to her life as an Arizona pioneer and the mother to Barry Goldwater. Ironically, her son Barry became fascinated with photography himself, donating 15,000 images to Arizona institutions, including one of John F. Kennedy that bears Kennedy’s autograph and a tongue-in-cheek comment to Goldwater “to follow the career for which he has shown so much talent–photography!”

Wright Morris, a Nebraska native from Central City, contributes one-third of the works in Photo Stories, many of which were included in his photo-texts, The Inhabitants (1946) or The Home Place (1948). With the help of a Guggenheim fellowship, Morris completed The Inhabitants, an experiment in documentary fiction. These black and white photos taken in the 1930s and ‘40s recount the destructive effects of the Dustbowl and the Great Depression on Nebraska .

“Cracked Earth” mirrors Nebraska’s dry counties west of the 100th meridian and will resonate with dry-land farmers and residents. While many photos reflect bleak and abandoned life, others portray Nebraska’s traditions and culture.

“Farm House, Near McCook” beckons a viewer to feel the light pouring into the house, to note juxtaposing patterns in the linoleum, the carpets, the wallpaper and the upholstery of a bygone era. In Morris’s texts, photos like “Basket of Cobs,” “Clothing on Hooks,” and “Dresser Drawer, Ed’s Place” functioned as artifacts documenting a way of life that speaks for itself.

Like Morris, Andrew Moore, a New York photographer recently featured in Joslyn’s Dirt Meridians, is known for his narrative approach to documenting societies in transition. From 2005 to 2014 he undertook the task of documenting Nebraska’s land and inhabitants often from a crop-dusting plane, but in this case, in the arena of cattle to market. His use of time-lapse photography in “Auction, Bassett, Nebraska,” keeps the auction attendees in clear focus while blurring the circling cattle to a smudged black swirl.

Charles Guildner, a former anesthesiologist from UNMC who built a second career as a photographer after retirement, has tipped his hat to Nebraska with the four photos in “Lives of Tradition.” One photo “Tribute to Wright Morris” imitates Wright Morris’s “Uncle Henry, Entering Barn, The Home Place, Near Norfolk,” complete with barn door, a vintage farmer in overalls and a well-worn seed cap.

“Bullet through King,” features a speeding bullet as it rips through a King of Diamonds playing card. This photo gives a nod to Harold Edgerton, a Fremont native and MIT scientist, who in 1931 developed strobe light technology, which facilitated the photography of moving objects.

While he did not seek to create art through photography, this technique resulted in Coronet, a famous milk-drop photo that was included in the Museum of Modern Art’s first photography exhibit in 1937. 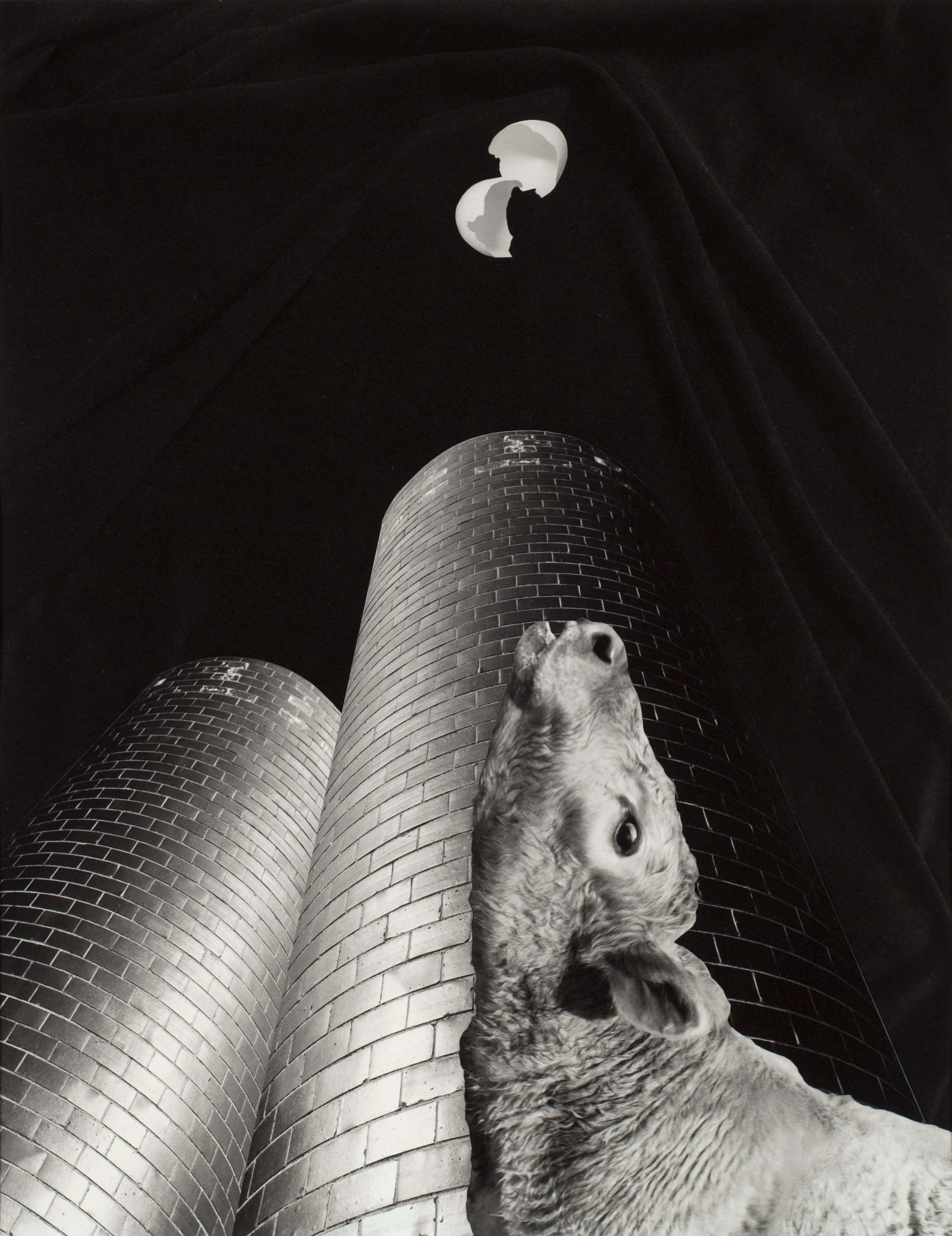 Charlotte Ingram’s “High C,” a photo collage that features a calf in the foreground seemingly mooing to the dark above, backed by brick silos and floating eggshells provides a welcome touch of surrealism to the show.

“Farm Hand,” a metal shed that walks on human hands over a field of soybeans shares a playful view of the crucial human factor in feeding the world. Ingram, an art therapist in Scottsbluff, strives for humor in her manipulated works, finding it underappreciated in the realm of art photography.

Historians will vastly appreciate the 19th century photos that originated as stereoviews, carte de visites or albumen prints attached to a thicker card stock. William Henry Jackson, whose photographic expedition to Yellowstone in 1870 helped establish the country’s first national park, worked in Omaha for a time as a missionary to Native Americans.

He built his first studio on the site of the downtown Omaha Library. His photos of Pawnee subjects from 1865-68 represent a mere fraction of over 40,000 of his negatives now housed in the national archives.

Both the black and white and handcolored photographs of Native Americans were taken by Frank Rinehart and Herman Heyn with the intent to provide souvenirs for the 1898 Trans-Mississippi Exhibition.

The standout of these portraits is Heyn’s “Eddy Plenty Holes.” This close-up image of an Ogallala Sioux whose sideways gaze and long hair sans headdress, creates mystery and respect for these Great Plains natives.

Another who captured the character and lives of early Nebraskans, Solomon Butcher, Nebraska homesteader in 1880, contributed “the most important chronicle of the saga of homesteading in America.” More than 1,000 negatives of sod houses, mostly in and around Custer County still exist.

One will want to get in-depth looks at these lineups of families, livestock and personal possessions. To help, Pat Drickey, gallery director and owner, has provided a magnifying glass on a nearby pedestal to allow closer examination.

Beyond a helpful magnifying glass, Drickey, a professional photographer known for his panoramic images of world-class golf courses, has also put his camera eye to art and architecture and many other subjects.

While visiting this exhibit, a chat with Drickey is highly recommended. His knowledge of the craft, plus his lively retelling of anecdotes related to the exhibit are well worth the time. Besides, everybody loves a good story.