There have been various times in the arts of America when inclusivity has had recognizable momentum. During the Harlem Renaissance of the 1920s and ‘30s, creative giants in literature, music and the arts described and celebrated African American culture.

Feminist, Black and Latino art movements sprouted in the fertile ground of the Civil Rights era of the late 1960s and ‘70s, marked by distinctive expressions of both pride and prejudice experienced by its exponents.

For a time, the art market patted itself on the back about a new multiculturalism, about openness and acceptance. But in reality, it moved on quickly and quietly to the next thing, despite the fact that artists continued making engaging work encompassing themes of race, identity and culture.

A visit to the exhibition 30 Americansat Joslyn Art Museum, on view through May 5, provides a provocative narrative for the expansiveness and vitality of expression among a diverse group of contemporary African American artists working in the last 40 years.

Drawn from the private collection of the Miami mega-collecting Rubell family, 30 Americansopens a window into the ways in which a diverse assembly of artists process their individual POVs across a variety of media and aesthetics. Despite the forced fellowship that can plague such rangy group shows, this one feels remarkably cohesive.

This is due in part to the interest of the collectors in seeking work with strong narratives. But it also shines through the quality of the art and the level of conceptual integrity achieved by many.

Perhaps the most magnetic example of this is the 25’ magnum opus “Sleep” by Kehinde Wiley. The artist is known for his exceptional elevations of traditional European portraiture conventions to create positive, beautiful and ennobling images of young black men.

Here, an artfully draped nude figure reclines languidly in repose. Photo-realistically accurate, the man’s powerful and splendid physique reads as a model of ideal male pulchritude, made more luxuriant by the decorative field of flowers that provide a wallpaper-like backdrop.

Wiley is careful to let the viewer see this is artifice. The props that hold up the model’s extended arm and feet are obvious. And the flowers wrap illusionistically into the foreground of the painting, as if come to life. The politics of representation are in full bloom here as well, as Wiley’s artful appropriations of the historical iconographies of power, class and wealth are used to confer dignity and grandeur to ordinary souls.

There are many works that validate and celebrate the African American experience. Barkley L. Hendricks’ “Noir” depicts a dapper man in a 3-piece pinstriped suit against a ground of bright yellow. Painted in 1978, this realistic portrayal has the gravitas to function as both portrait of an individual and, given the subject’s attitude and panache, as an aspirational figure of a successful and stylish urbanite. 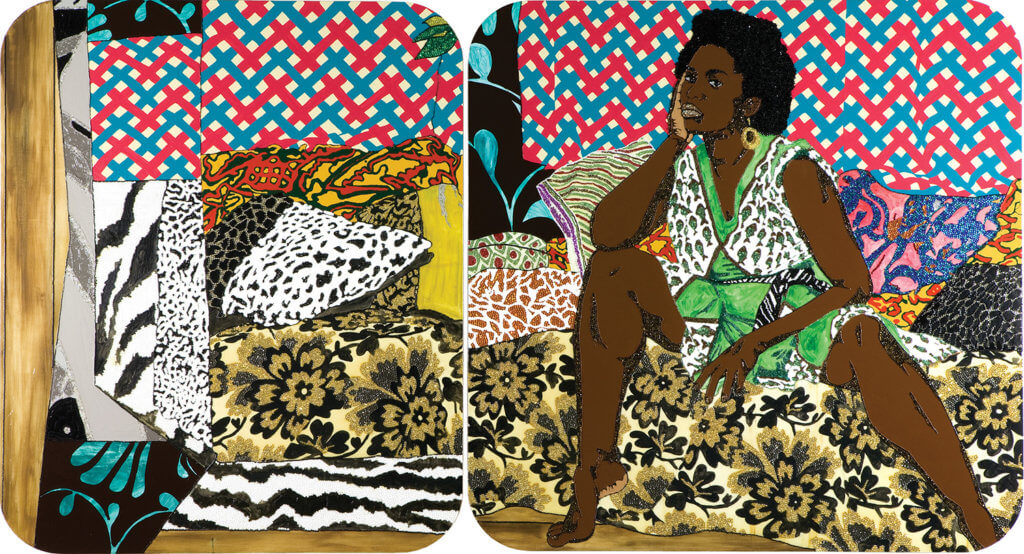 Mickalene Thomas’ approach to beauty is, by contrast, bold and stylized. “Baby I Am Ready Now” is a large acrylic and enamel diptych bedazzled with rhinestones. A lone female figure sits in an interior setting, whose wildly eclectic décor demonstrates Thomas’ signature mashup of vivid patterns and colors. The sitter, directly engaging the view, is self-possessed and sexually aware, and the resultant image is both psychologically powerful and visually arresting.

The happy couple in Kerry James Marshall’s “Vignette” appear to be living the dream. Painted in a monochrome, silhouette style, the scene depicts a pair dancing in a rose garden with contemporary home in the background. Pink hearts—the only splash of color on the canvas—drift down toward them. Marshall wanted to use the Rococo sweetness and frivolity of the scene to see how he could merge traditional Western art history with the social issues that were relevant to him. Typical of Marshall’s work, the African American family is foregrounded as an under-recognized subject in art.

Other artists in the show are equally engaged with the iconographies of under-representation in art and society, but in an even more pointed fashion. Henry Taylor intentionally works in a folksy “outsider art” style, with minimally described figures and emphasis on blocky color, to paint portraits of African American life.

“A Long Jump by Carl Lewis” features an image of the famed Olympic star of track and field. He appears to be running away from something, hurdling a white picket fence. In the background looms a city prison; the word GOLD floats like clouds above it. Taylor neatly encapsulates what is often deemed a binary option for young black men—achievement in sports or illegal activities ending in jail. The gold traffic stripe in the road behind Lewis emphasizes this bright line.

The complex history of discrimination, oppression and violence against African Americans is also addressed in the show and Joslyn is careful to advise visitors that an uplifting narrative is not to be expected at every turn. Indeed several works have proven to be difficult, unsettling and even controversial.

Kara Walker uses the format of the Victorian silhouette to draw a sharp knife edge around the history of slavery in America. “Camptown Ladies” is a vision of the Antebellum South unfolding in cut black paper figures across a long wall. Part satire, part nightmare, the figures blend caricature and fantasy, engaging in actions that are unclear and often cruel. Walker shies away nothing—sex, scatology, stereotype, sadism—revealing the treacheries of power and morality, as well as the persistence of history’s wounds.

Gary Simmons’ “Duck Duck Noose” also leans on the sharp points of the past. A group of wooden stools topped with Ku Klux Klan hats encircles a noose hanging from the ceiling. The title’s reference to a popular children’s game does little to lighten the tone of the work, except to suggest that lynching victims were often chosen as randomly as if by whim. The open prejudice and hatred revealed by these crimes, Simmons seems to suggest, should not be viewed as a closed or hushed chapter of history, but as recognition that injustices of all kinds continue to this day, cloaked or otherwise.

Not everything in 30 Americansovertly addresses culture, race and identity, yet even among those who center their artistic language in abstraction, aspects of African Americanness may be significant part of a work’s context. Leonardo Drew’s “Untitled #25” is a minimalist grid of blocks made of cotton mattress batting. The work is architectural in nature and embodies his interest in regenerating found materials, yet it is nearly impossible to separate such works from the history of the American cotton industry being based in slave labor.

“Whore in the Church House” by Mark Bradford reads as an abstracted map with its dynamic network of radiating lines and graphic color blocks. Created through his signature technique of collaging, bleaching, abrading, tearing and painting, it incorporates materials sourced around his South Central LA neighborhood, including posters and hair papers from his mother’s salon. The dense layering of materials lends the feeling of accumulated time, pace and noise of the urban environment.

For all its intention to bring the work of African American artists into a deserving spotlight, in the end 30 Americansfeels like a solid contemporary art exhibition with a general emphasis on narrative and on fine art as a component of social practice. And perhaps that is the point. That no bright line seems to exist between these works and the larger “contemporary art world” is a testament to how this range of expression has gradually entered its slipstream. The art market may not yet be post-racial, gender blind or culturally unbiased, but this exhibition suggests that prejudice is taking a backseat to pride.

30 Americans: An Exhibition from the Rubell Family Collection runs through May 5 at Joslyn Art Museum. There is a non-member admission fee for this show, though it is free to the public on the first weekend of every month. The museum is located at 2200 Dodge Street and is open Tues-Sun from 10am-4pm; late ‘til 8pm on Thurs. For more information, visit www.joslyn.orgor call 402/342-3300.