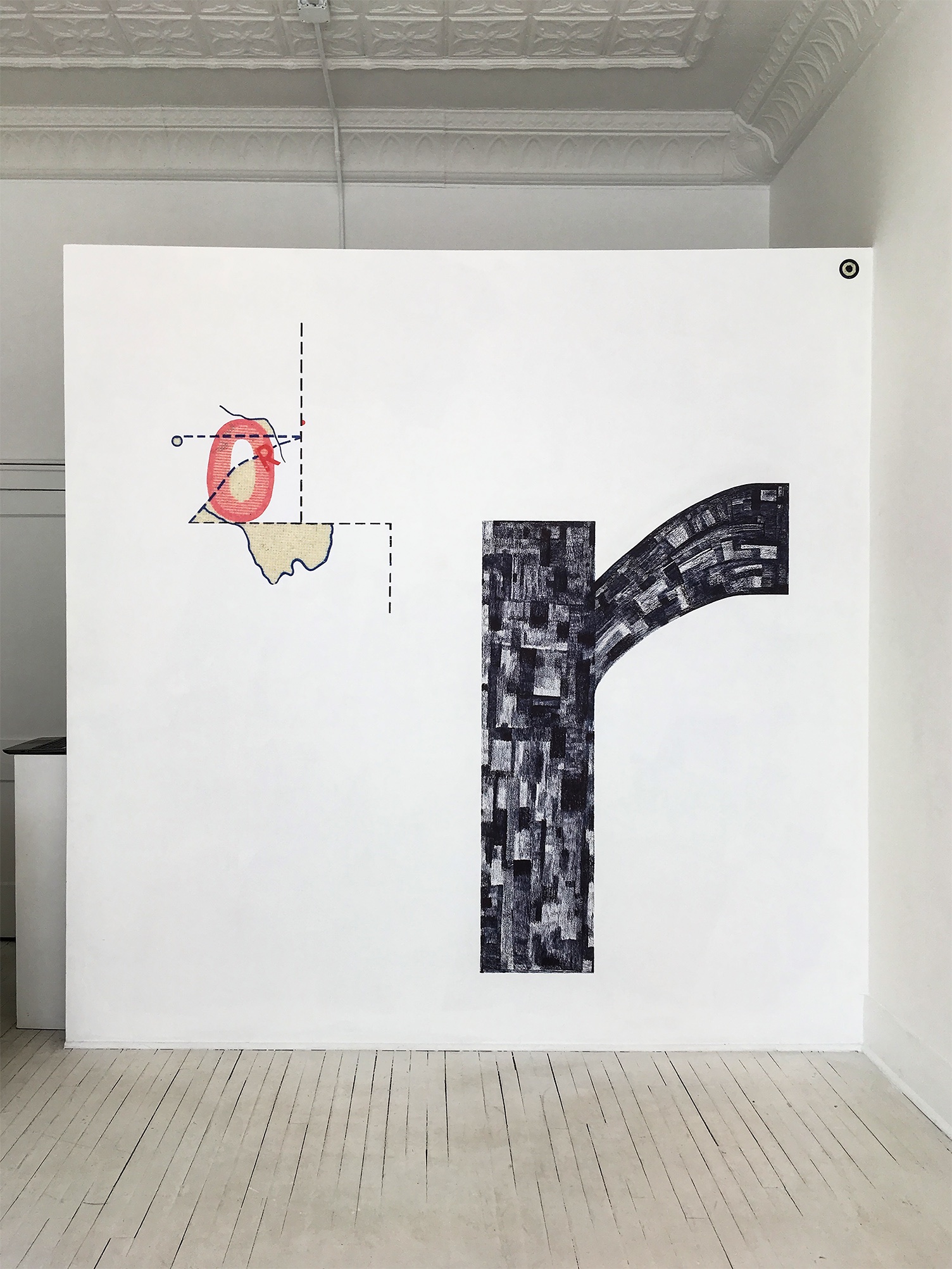 In 1972, NASA launched the Pioneer spacecraft, the first spacecraft that, if all went according to plan, would eventually leave our solar system. At the time, an enterprising student convinced NASA that a plaque explaining our species and our location in the cosmos be attached in case someone, or some thing, found the craft.

That forward-looking student, one Carl Sagan, was assigned the daunting responsibility of coming up with a symbology that might be understood by a random non-human entity.

The success of symbols used in communicating information is directly related to the ease at which we recognize them. Cartography has been tackling this enigma for centuries. A map-maker must rely on patterns, symbols and colors that have some convention; green for grass and trees and blue for water.

Map making then is an inspiration and challenge both, waiting for enterprising artists as well as scientists to take advantage of and interpret. Dialogical, the current show at Darger HQ, features “language and map imagery to create a conceptual analysis of how images and language from the media work together to convey information.” 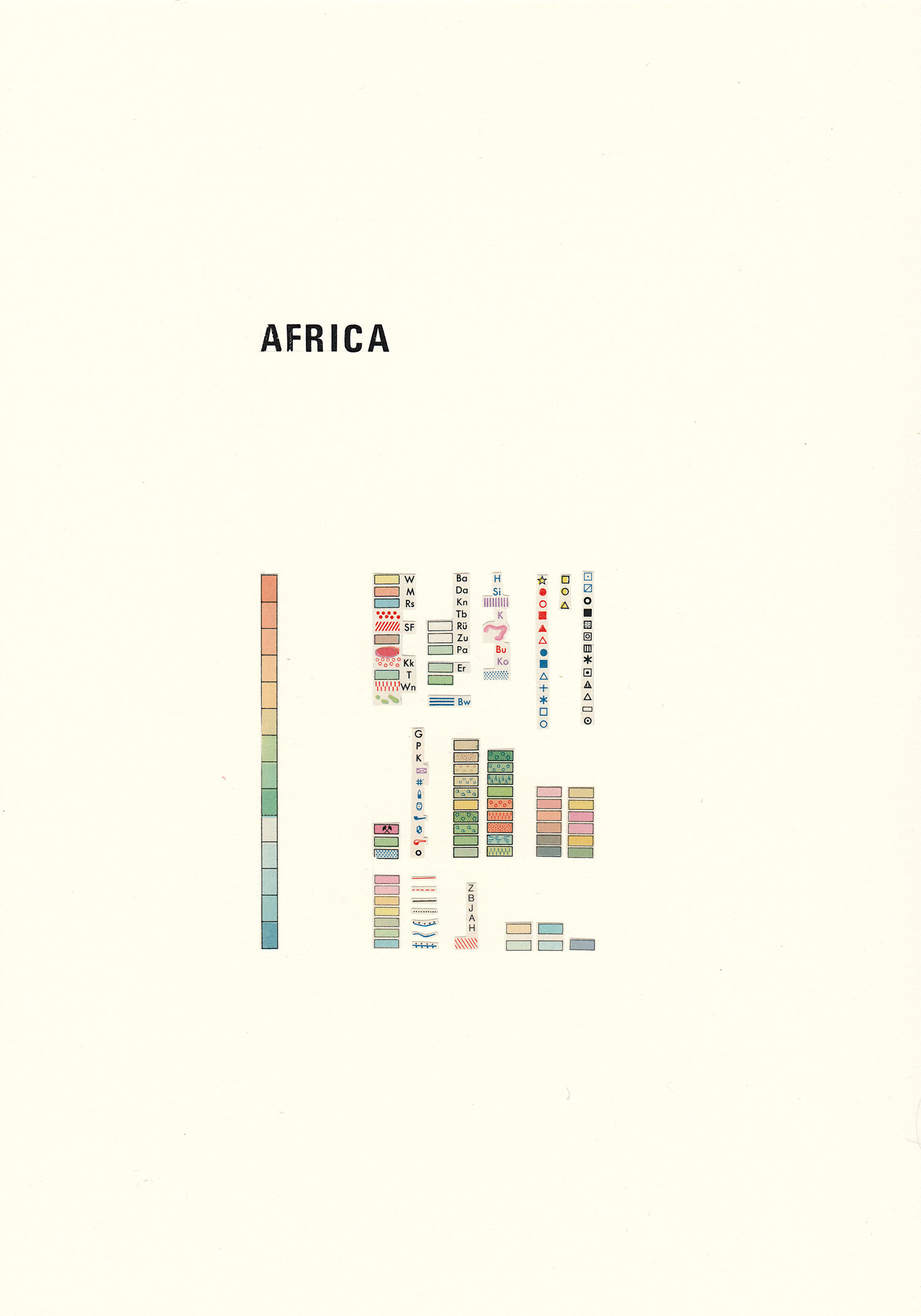 Sontheimer is currently Associate Professor of Art at University of Nebraska-Lincoln. Dvořák received her MFA from Glasgow University in Vienna and exhibits her work internationally.

Scientist Sagan, though not known as a visual artist, his assignment was the same; use symbol, pattern and color to communicate an idea, and the more universally recognizable the marks, the easier it is for viewers to connect. He came up with a diagram and groups of symbols, some immediately accessible, others a bit enigmatic to the layman. Science and art in a “dialogue” of their own. 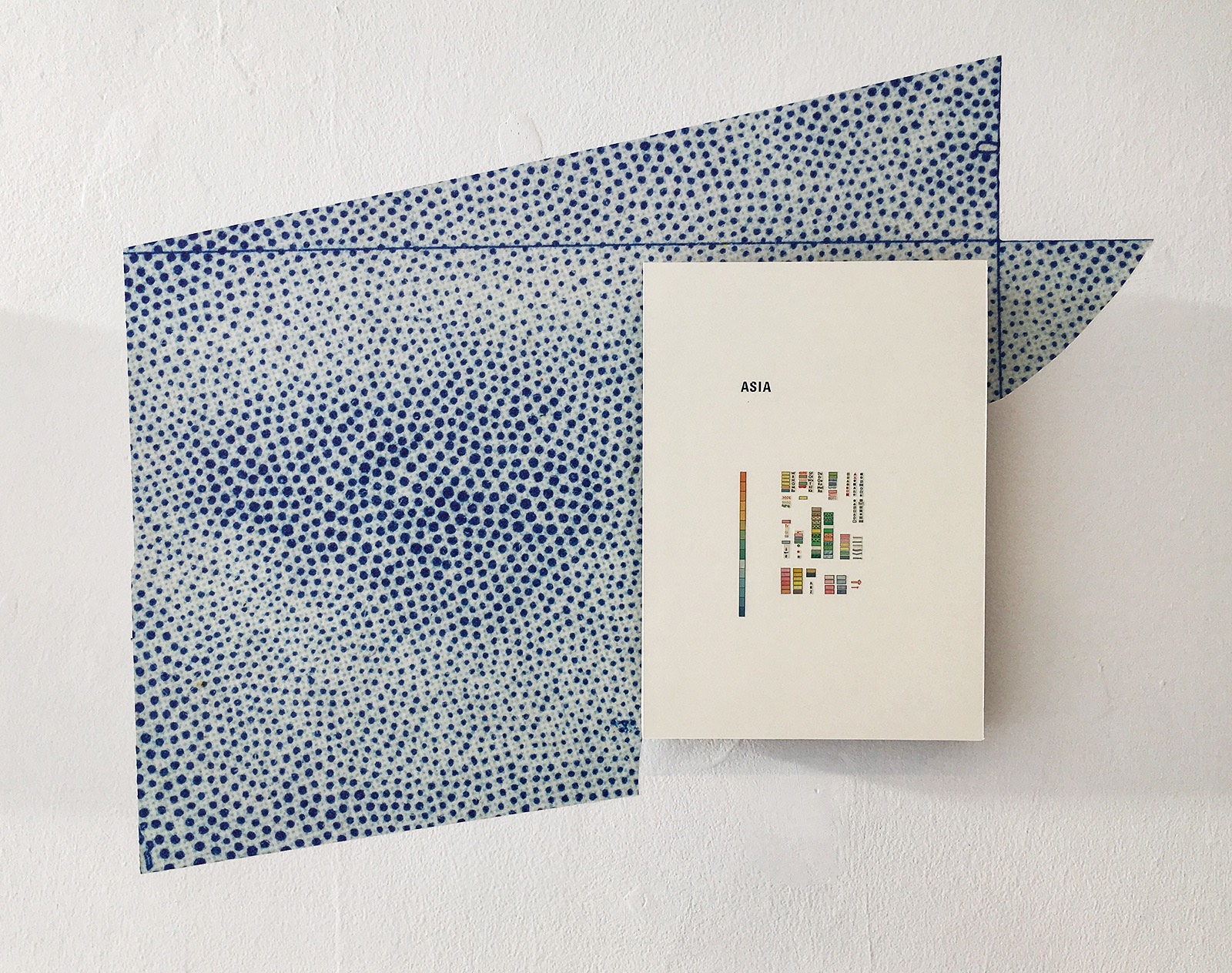 Dvořák communicates through simplified cartographic legends and map graphics. Appliques of colorful, patterned shapes, combined with small, sparse, concisely rendered legends – groups of stacked boxes of color and symbol – she presents a view of the world that requires a physically closer viewing of the sharp and precise little rectangles, but demands we step back for a more generalized examination of the bigger masses of dots and line and color.

It will be obvious to anyone who has looked at any map beyond a 1970’s AAA Trip-tik, that these various graphic shapes are simply enlargements of patterns and symbols depicting types of landforms, groups of trees and such as they enhance the overall presentation of the 8 inch by 12 inch cardboard and wood legends. Of the five rectangular legends only two are combined with the enlarged applique patterns, and this symbiotic pairing could have been more generous. 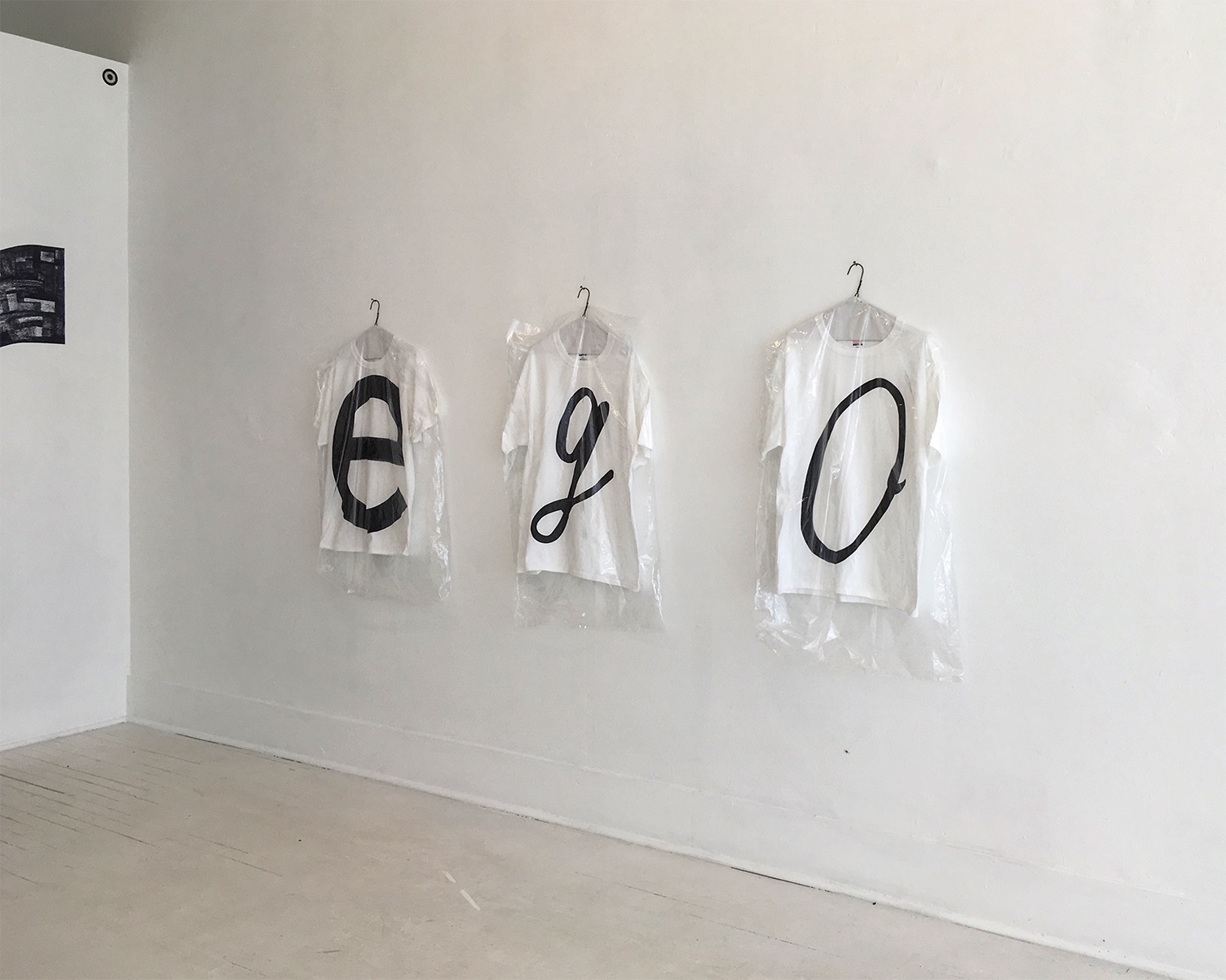 Matthew Sontheimer’s contribution is a cryptic installation of graphic lettering, sketched with black Sharpie on the gallery wall, a photo diptych of a pair of hand colored (purple Sharpie this time) shorts and a series of t-shirts, sporting large black letters that mean nothing by themselves, but obtain substance once the wearers stand in order to spell the word “ego.”

His work is oddly personal and a little confusing at first, quite the opposite of Dvořák’s outwardly communicative work, much like parts of Sagan’s plaque to a non-scientist. With patience a viewer comes to appreciate Sontheimer’s collection of seemingly disparate objects as a legend to a very personal psyche-map, suggesting an inward orientation or translation. 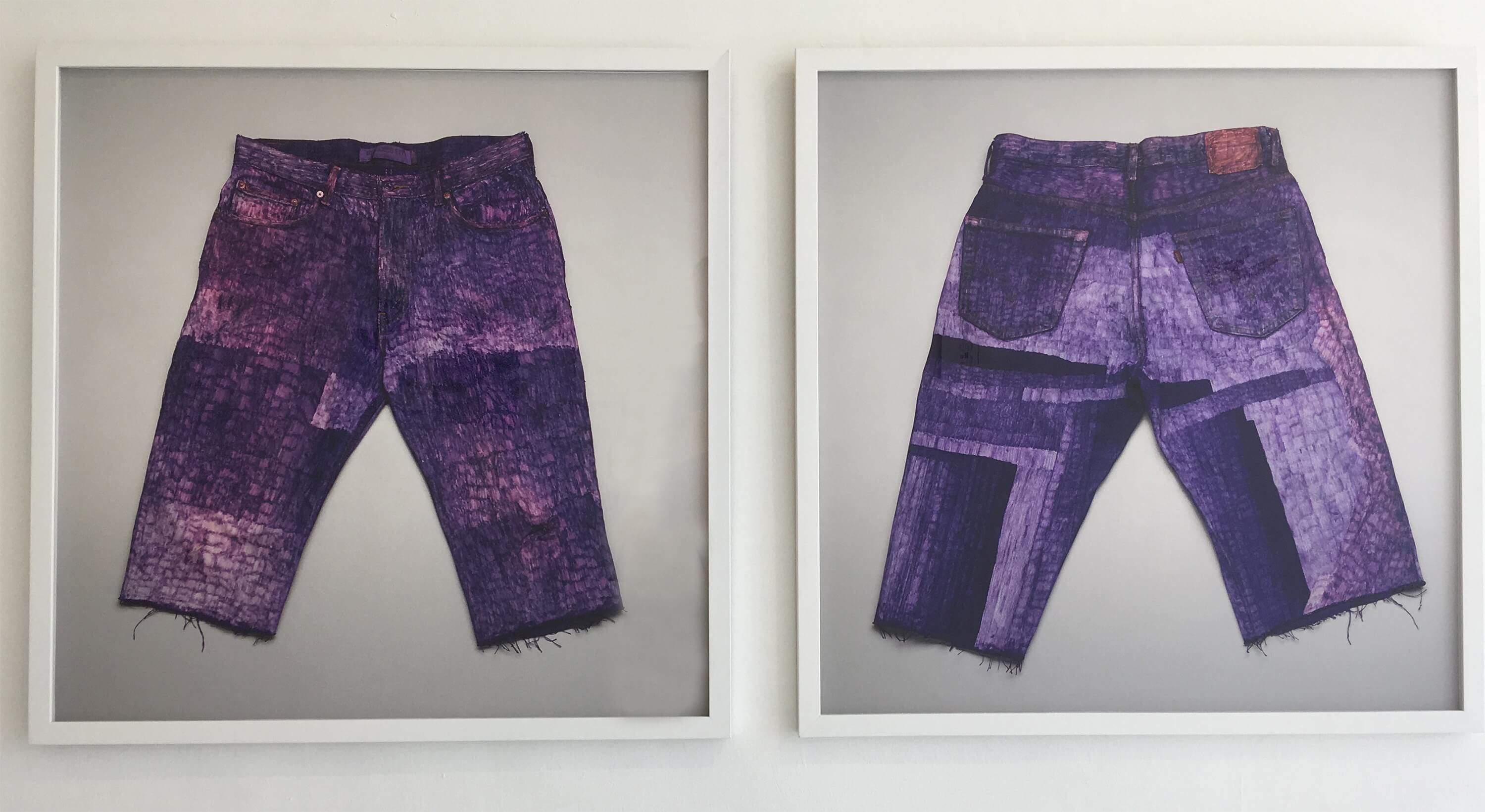 Author Miles Harvey, (The Island of Lost Maps) wrote of maps sometimes having no distinct vocabulary: “Often it muses on the jagged terrain of the heart, the distant vistas of memory, or the fantastic landscapes of dreams.”

The end wall of the gallery is a collaboration; a blown-up detail of a piece of map by Dvořák, prominently emblazoned with a pink capital “O” and bright red “R,” and the large, lower case, Sharpie-rendered “r” by Sontheimer, precisely reflecting the texture of hand-coloring on the shorts in the diptych.These items appear as continuations of each artists displayed works, and at the same time create a somewhat comical comment on the mundane.

What really brings the show together is the small, perfectly-bound booklet that accompanies the exhibit. Designed by fellow Dargerite Peter Fankhauser and for sale for an affordable $10, this fun booklet is a journal of communiqués between the two artists about this exhibit.

A playful intercourse of thoughts, ideas, explanations, combined with Fankhauser’s manipulations of type size and graphics, the book becomes the legend to the symbol-language of the exhibit.

Although the viewer might wish for a few more works from each artist, there is something to be embraced with the minimalist displays this gallery often provides. The atmosphere at Darger HQ is one of contemplation and appreciation of the work, in addition to sales.

DIALOGICAL, featuring work by Sophie Dvořák, of Vienna, Austria, and Matthew Sontheimer, of Lincoln, Nebraska, will be on view through June 3, 2018. Further information can be found by calling the gallery at 402-209-5554 or at dargerhq.org. The first Flatlanders print publication, a companion book DIALOGICAL is available at the gallery and online.