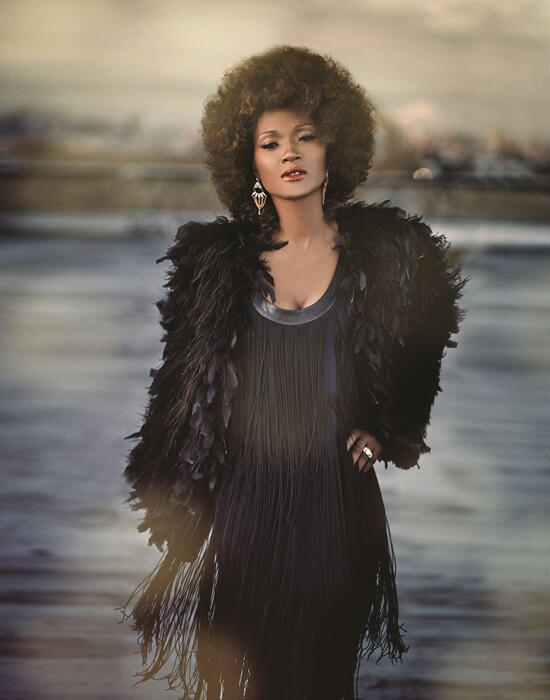 Omaha native actress Yolonda Ross often turns up in edgy, must-see indie films and television projects. After a regular stint on the acclaimed HBO series Treme and playing secret lover Robyn Crawford in the Lifetime biopic Whitney, she has a recurring role in this season’s most talked about new series, The Get Down. The Netflix original from visionary filmmaker Baz Luhrmann (Moulin Rouge!) depicts the birth of hip-hop in the cultural maelstrom of 1970s the Bronx.

“The show is about music – it’s about the beginning of hip-hop, rap, disco, everything that was happening during that time,” Ross said.

The Omaha Burke High grad left here for New York to pursue a fashion career in the 1990s. Acting eventually became her main form of expression, though she also sings, paints and slays the red carpet. Early on she nabbed network TV gigs, but her breakout came as the lead in the HBO women’s prison drama Stranger Inside directed by Cheryl Dunye. It’s the first of many radical feminist projects to cast Ross in provocative roles.

“I actually do have a great record of working with women. I feel there may be something to that when looking at the kind of material I’m drawn to. I haven’t sought them out – it’s happened organically.”

In Get Down she plays Ms. Green, an influential teacher of young people at the forefront of a cultural revolution.

“I was in L.A. when the audition came through,” Ross said. “I put myself on tape first for the role of Mrs. Kipling, the mother of a couple main characters. Then I got asked to come in and read for Ms. Green. I went in with a song prepared because we all had to sing, then met with Baz when I got back to New York. That was it.”

She finds many things appealing about what Ms. Green symbolizes as a young black female professional committed to her community.

“She’s the one character that represents the ‘single’ woman of this time, which was a very important time for women and women having rights. Being a feminist really came to light back then. I feel Ms. Green represents a woman from the Bronx who got out, learned and came back to help others. She’s smart, strong and caring. She reminds me of characters I grew up watching on TV when I was a kid. So, it’s really cool to be able to play someone like that now, as an adult.”

Ross knows what it’s like to have a teacher who cares. She fondly recalls her English teacher at Burke High – the late Karen Owens. “She treated us students as equals, not as kids. She listened to us and our points of view and nurtured our growth in writing and expressing ourselves. She was a dear friend of mine and someone that made a difference in my life.”

Luhrmann, whose film credits include Strictly Ballroom, Romeo + Juliet and The Great Gatsby, is known for Pop Art-style production values, elaborate camera work and flamboyant cutting. His production designer-wife, Catherine Martin, is a key collaborator. On Get Down he also worked with Pulitzer Prize-winning playwright Stephen Adly Guirgis (Between Riverside and Crazy), whose LABrynith Theater Company Ross worked in. Ross is impressed by what the creative team has wrought in recreating the period and place.

”This show is the ’70’s. From what I’ve seen, it looks and feels like ’70s TV – not a current show pretending to be. Baz’s crew has worked with him for a long time, so these guys know what he likes and how to attain that. That’s a luxury to have in a series production. Baz is great to work with. You know every aspect of the production is gonna be great when dealing with he and his wife, Catherine. They are known for paying attention to all details. The Get Down is no different. What I really appreciated about working with Baz is he gives you everything you need to ‘act.’ He allows you to do your work without being rushed or feeling like you’re just going through a routine.”

“This is the first project I’ve done in the realm of streaming,” she said. “As we have become stay-at-home viewers of all content, I feel these new platforms to distribute content are just what’s needed. It works for both sides. As a creator of content, you will have the ability to get your story across in its full 10 to 13 episodes, without the possible network interruption of canceling you or having to go through the timely and expensive procedure of shooting a pilot, waiting and then shooting your series – if picked up. It’s a quicker process to get down to creating.

As a filmmaker herself, Ross has a vested interest in how works get shown. She wrote-directed-starred in the short Breaking Night that played festivals. Alexander Payne provided support. The short became the music video for Manfred Mann’s cover of “Blinded by the Night.” She’s developing a feature she wrote and plans to direct and star in next spring. Her co-star will be Clarke Peters from The Wire. She said, “The film deals with the fragility of love, art and race and takes place in New York.”

Like her fellow women filmmakers, she aspires to opening more doors for women behind the camera.

After meeting at a women of color bash honoring Ross, Angela Basset directed her in Whitney. “Angela is a great person and wonderful to work with.” Ross’s portrayal of Robyn Crawford followed the script and what her instincts told her.

“As someone that studies relationships and human behavior for a living, knowing these two women knew each other since their teenage years through Whitney’s success and fall, it only made sense to play her as someone that loved and cared for her on the deepest level. I saw Robyn as the solid rock in that relationship, even after Whitney got with Bobby Brown.”

Ross also shines in male-driven material, including Antwone Fisher under Denzel Washington’s direction. Twice David Mamet has written parts for her – in The Unit and in Phil Spector, which saw her work with an idol, Helen Mirren.

In Lila & Eve she worked with friend and Oscar-winner Viola Davis.

This fall Ross is once again in an edgy film helmed by a woman, Ana Lily Amirpour’s The Bad Batch. The black comedy about a community of cannibals in a Texas wasteland stars Jim Carrey, Keanu Reaves, Jason Momoa, Diego Luna and Giovanni Ribisi.

“Ana Lily Amirpour knows what she wants. Just as she did with her first feature, A Girl Walks Home Alone, Lily creates a world.”

Fortunately. she has a deep reservoir of creativity to escape the noise, including painting. At her recent first solo exhibition in New Orleans she showed work inspired by Aboriginal dot art. “I like the method of storytelling through symbols,” she said. Ross, who’s appeared at screenings of her films in Omaha and Fremont, hopes to exhibit here one day.