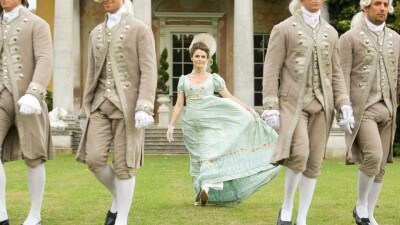 Since Stephanie “Twilight” Meyers is a producer on Austenland, the following question is fair game: Why are readers who fangirl out about Mr. Darcy from Jane Austen’s “Pride and Prejudice” embraced or applauded while devotees of whatever-that-sparkly-vampire-dude’s-name-was are chided? Both of the male characters demonstrate icky behaviors that shouldn’t be desired in a mate, although admittedly the angst-ridden floppy-haired neck-biter does have a few more negatives on his side, including quasi-pedophilia and abusive tendencies.

The point is, Austenland is a weird criticism of fans that made Meyers way, way wealthier than should have been possible. Jane Hayes (Keri Russell) is basically a Jane Austen twi-hard. With cardboard cutouts of Collin Firth as Mr. Darcy in her adult apartment, Jane is reminiscent of the mom-of-two wearing a “Team Jacob” shirt. She blows all of her savings on a trip to an immersive “authentic Austen experience” at an English estate. There’s no “Twilight” equivalent for that, although Hot Topic comes close.

Once there, she is promised a fictional romance with one of several characters, including Mr. Henry Nobley (JJ Feild), the Darcy stand-in, and Martin (Bret McKenzie), the manservant with just the right amount of scruffy facial hair. With her buxom, brainless new friend, Miss Elizabeth Charming (Jennifer Coolidge), Jane discovers the problems with actually living in the fictional world you always dreamed of living in. And it’s not just the stupid character names you have to deal with.

One thing Austenland gets right is that even though Jane acts like an awkward turtle, she’s actually painfully adorable; when empowered to be fearless she is the desire of all around her. If ever a part seemed tailor-made for Russell’s irrisista-dimples, it’s this. Meanwhile, McKenzie brings a nonchalant swagger that allows scenes between the two to be believable, a marked departure from the rest of the film.

The whole concept from writer Shannon Hale and writer/director Jerusha Hess is to turn a trip to an Austen-theme park into basically an Austen novel. And they do. It’s just that’s not as fun as it seems. What makes the author’s work timeless and brilliant merely makes for an okay film. And honestly, if direct adaptations haven’t really captured Austen’s charms, what chance does an impression of an adaptation have? The other major problem is the drunken, scattershot tone that tries to be all things to all people. Coolidge is in a slapstick comedy, Russell is in a rom-com, Feild is in a dramatic romance and McKenzie is apparently daydreaming about working with The Muppets again.

If Austenland is supposed to criticize obsessive fandom, the ending makes no sense. If it isn’t, the rest of the film makes no sense. And yet, the light, airy, innocent nature of it all is somehow pleasing enough. In an age when all comedies are required to have at least one “oh, no they didn’t” moment, it’s nice to see one you can watch with your parents without feeling Regency Era social shame.