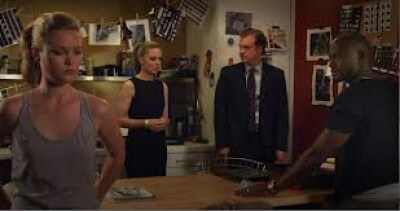 Satre was almost right. Hell isn’t just other people; it’s other people at a dinner party. If you’ve been bad, you can look forward to small talk with Satan for all of eternity, while all around you couples in the middle of a tiff are being passive aggressive. Just spitballing here, but the music is John Mayer and the wine is in a box.

Between Us is Edward Albee’s classic play “Who’s Afraid of Virginia Woolf” regifted in new wrapping paper. Although nothing Albee wrote feels any less vibrant or fresh today, as long as we’re remaking every TV show, board game and classic film, we may as well let playwrights have a turn. Writer/director Dan Mirvish, working with Joe Hortua on an adaption of Hortua’s play, add only one new ingredient to the mix, but it does make a new flavor. Instead of the academic concerns in “Woolf,” Between Us puts an emphasis on aborted photographic art careers. Don’t worry; the horribly uncomfortable in-couple fighting remains.

The only thing worse than one dinner party is two, and that’s what’s on tap here. Grace (Julia Stiles) and Carlo (Taye Diggs) visit their friends Joel (David Harbour) and Sharyl (Melissa George) at the latter couple’s palatial estate. Grace and Carlo are newlyweds still glowing; Joel and Sharyl are full-on War of the Roses up in that mansion. No matter that a baby is sleeping in the next room, Joel and Sharyl begin tearing into one another in ways that only acrimonious married people can.

The film then jumps forward to a second, later gathering. Joel and Sharyl show up on Grace and Carlo’s doorstep unannounced. This time, the former couple has seemingly figured out their life, with much props to Jesus. But Grace and Carlo are on the rocks, with postpartum depression and money troubles driving them into the same manic displays they saw in the first party. Because animosity is contagious, in no time at all, the four participants all seemingly hate themselves and each other. This film will not play at wedding boutiques.

Mirvish and Hortua can’t say anything Albee didn’t already about the perils of matrimony, even when love is clearly present. But what Between Us lacks in originality, it makes up for in Taye Diggs. And Stiles, George, and Harbour, who all deliver Broadway-for-the-big-screen performances. That’s really all this is, after all: with the closed-in sets and miniscule cast, this is basically a trip to a marquee theater for those out of the area code. Much like Joss Whedon’s recent Much Ado About Nothing, the results are mostly satisfying.

The conflict between Joel, the photographer who “sold out,” and Carlo, who is still in it “for the art,” is fine subtext but fizzles when it becomes an argumentative centerpiece. And it’s also worth mentioning that while the men are shown to be drunken blowhards and uncaring asses, Hortua lays the biggest blame on the women, with Sharyl being unfaithful and Grace loathing her ever-expanding family. Still, for the discretionary viewer, Between Us is a well-made window into a dining room you’re happy you aren’t sitting in.